This is the shocking moment six cars were involved in a shunt on a busy road in Thailand.

Footage captured on the dashcam of an SUV reversing into a parking space showed the cars crash on the street.

Moments before the collision, a tuk tuk makes its way slowly along the nearside carriage way before it comes to a halt when a man attempts to cross the road. 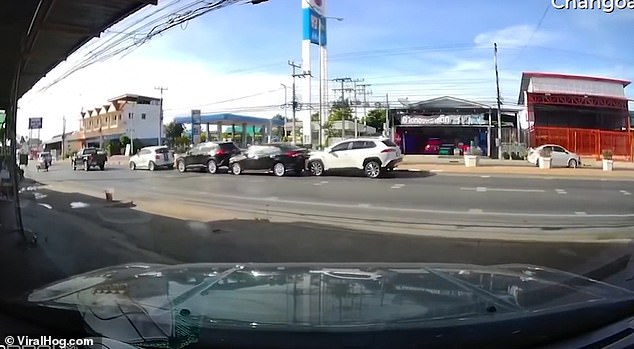 This is the moment an SUV had ploughed into the car in front having not seen the traffic jam until too late. The cars were forced to brake heavily after a pedestrian was seen in the middle of the road 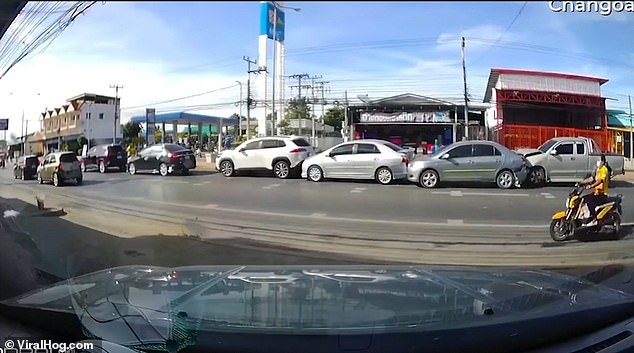 Moments later, a pick up truck shunted into the car in front pushing it forward into another car which was then pushed into the SUV involved in the earlier smash

An pick up truck on the outside lane braked heavily after spotting the pedestrian.  Two cars managed to stop safely behind the truck.

The driver behind the SUV managed to stop in time, but unfortunately for them, the two vehicles behind were shunted forward by another pick up truck.

The incident took place on May 23. It is not known whether anyone was injured in the series of low speed impacts.

Ordinarily, in concertina collisions such as this involving three or more cars, the motorist at the rear is normally liable for the crash – as long as the car in the middle was stationary.

PayPal users to enjoy crypto withdrawals to wallets of their choice

Is Bank of America a buy or sell in April?