Water way to go! Taco Bell employee cannonballs into the SINK on his last day in the kitchen in viral TikTok video

A Taco Bell employee who quit his job to pursue playing video games full time finished his last shift in style this week – by diving into the kitchen sink.

Steven Pauley, 20, from West Virginia, asked a colleague to film him as he launched himself into the sink full of frothy water at the end of a night shift at Taco Bell on June 14.

Hilarious footage shows the fast food employee cannon balling into the kitchen sink, sending soapy water splashing all over the floor and then emerges completely drenched, clutching cutlery in his hands.

The video was uploaded to TikTok where it has more than 17million views and 40,000 comments. 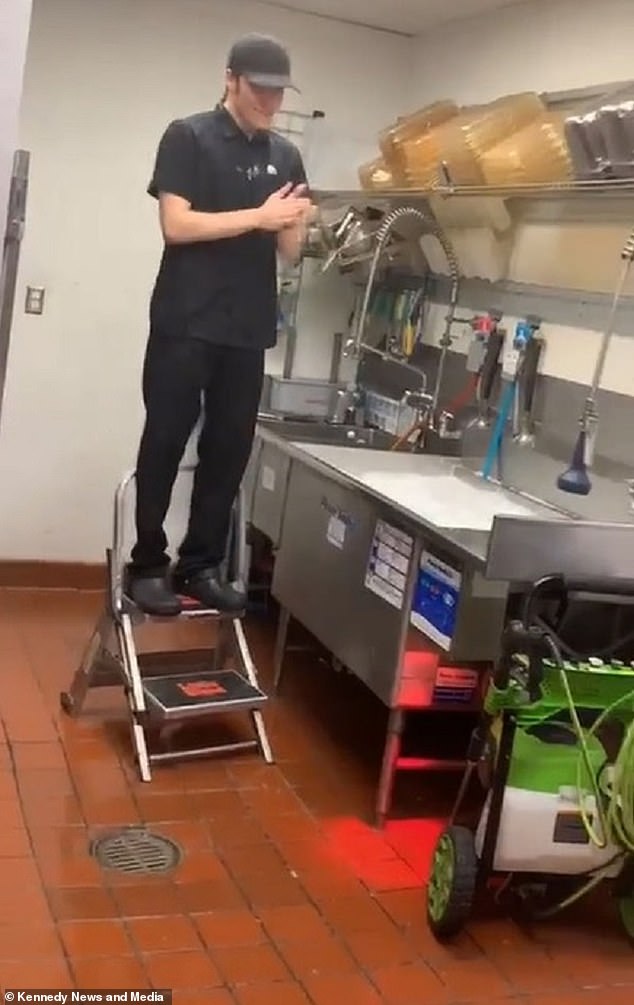 Steven Pauley, 20, from West Virginia, who has quit his job to pursue playing video games full time, finished his last shift at Taco Bell in style this week – by diving into the kitchen sink

Steven had been employed at the Mexican-inspired chain for three years before his big exit.

Steven said: ‘A lot of people are giving me a bad rap for the video. But I like to have fun on my shifts. I’d put in my two weeks’ notice though and worked the remaining two weeks.

‘On the last shift, we got everything done and cleaned the store as normal. We finished at 4am, and then we filled up the sink.

‘That water is normally pretty hot, so we had to throw some ice in there. I’m not trying to jump in a burning bath and put my life on the line. 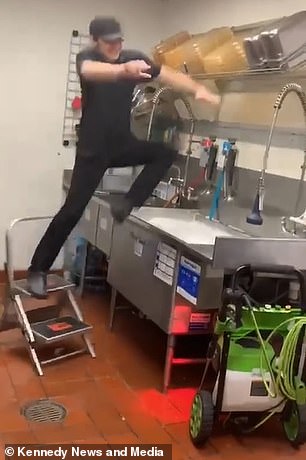 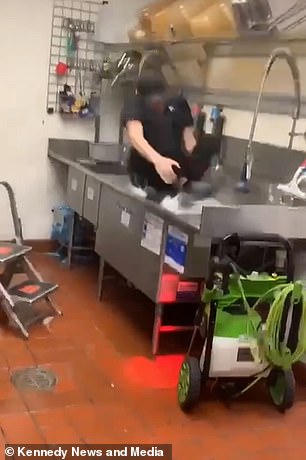 Hilarious footage shows the now-former fast food employee as he launches himself in a cannonball with his knees tucked into his chest, landing in the large basin of frothy water

‘I hadn’t started the shift thinking I was going to jump in the sink that night, I just thought “Why not have some fun at the end?” We cleaned up afterwards anyway.

‘Luckily I had a spare change of clothes in my car.

‘I got quite a few negative comments from people saying I was going to be fired. I’m usually the positive guy so I’m not used to that.’

Steven now wants to focus his attention on playing video games – primarily Call of Duty – on his Twitch account ‘undeaddot’, which has more than 1,000 subscribers. 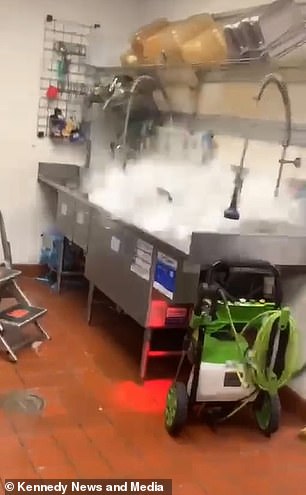 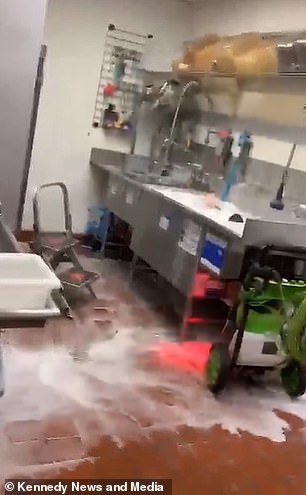 He makes a huge splash, sending soapy water splashing all over the floor and later uploaded the video to TikTok where it received more than 17million views

Steven said: ‘I’ve been on Twitch for two months – it’s a hard platform to grow on – but I was doing well, enough to the point I wanted to focus on it a little more.

‘With Twitch, you can make money based on performance. People can hit the subscribe button and pay monthly to support you, or give you money through a virtual tip jar.

‘It’s still a hard platform to grow on, even if you’ve got a TikTok video with 17million views like I have. Not all of those 17million people are going to want to watch me play Call of Duty.

‘I did double my followers within a night though, which I’m happy about. 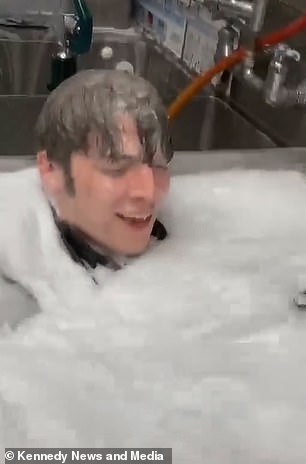 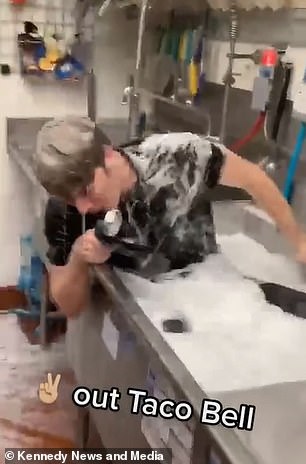 Steven emerged from the suds dripping wet as he marked the end of his time working at the Mexican-inspired chain, but luckily confirmed he had a spare change of clothes in the car

‘My game plan had originally been to get a regular 9 to 5 job, and then have a set streaming schedule, but it never worked out like that, so I figured I would do gaming full-time.’

Many commenters on Steven’s TikTok could not believe what they had just watched.

TikTok user Jinx commented: ‘Man just did a cannon ball in a sink! TikTok will never fail to surprise me.’

One shocked person wrote: ‘What in the Mary Poppins?! I didn’t think the sink was that big.’

Another former employee, Ashten Rae Burley commented: ‘Man I should have done this when I quit Taco Bell,’ while TikTok user Bella commented: ‘Taco Bell employees always be the crazy ones.’