The former king, who abdicated in 1936 to marry the divorced American socialite Wallis Simpson, also passed information to Germany that aided the fall of France in 1940, according to the Channel 4 documentary which aired last night.

It used evidence such as captured German documents that are held in the Royal Archives to support the claims.

The damning allegations come after years of academic research into how close to the Nazis the Duke of Windsor was and the effect of his friendships on the war.

Andrew Lownie, upon whose book the documentary was made, explained: ‘The Duke definitely believes the continued severe bombing would make England ready for peace.

‘It is extraordinary – here is the former king of Britain saying if you bomb his family and country, it’s the best way to bring the pursuit of peace.

‘He’s prepared to go to those lengths to achieve those aims. It’s chilling and sinister and very shocking.’ 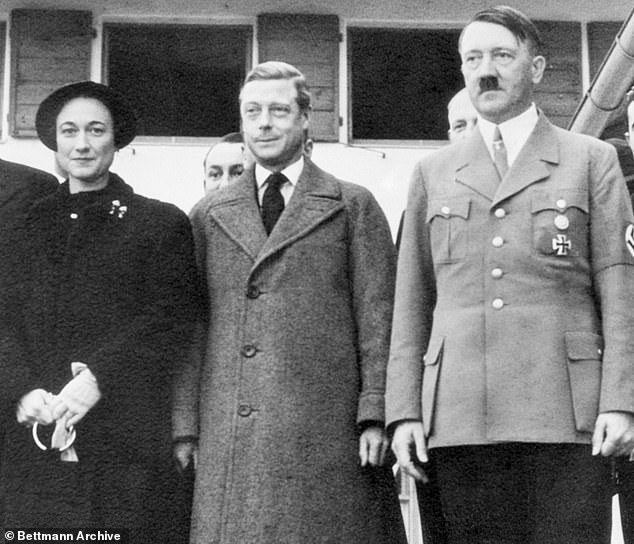 Edward VIII encouraged the Nazis to bomb Britain into submission in World War Two and crown him as King. Above: The then former king Edward VIII and his wife Wallis Simpson meeting Nazi dictator Adolf Hitler in 1937

One stunned viewer commented: ‘Mind boggling the treachery and vanity of the man.’

Another wrote: ‘Can’t believe what I’m waiting…shocking what a traitor to the country he was.’

Appearing in the documentary, A.N. Wilson explained how the Duke was attracted to Hitler who was ‘flashy’ and ‘trendy.’

Anna Pasternak said the former king was ‘blinded’ by the fact Wallace ‘hadn’t experienced the pomp of the royal tour.’ 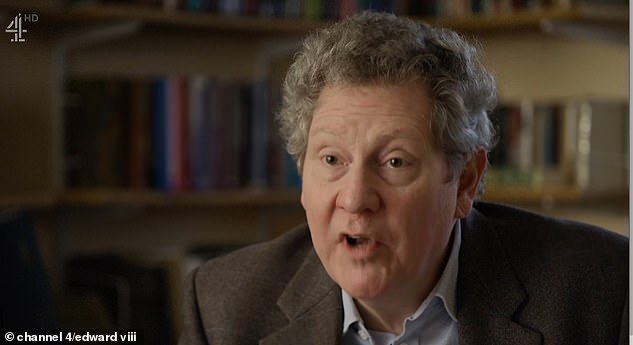 Andrew Lownie, upon whose book the documentary was made, said his discoveries had been ‘chilling and sinister’

He explained: ‘He was so susceptible to that kind of flattery and he succumbed.’

Wilson continued: The Duke once said to one of his friends in exile, he didn’t have a drop of English blood in him. He was pure German.’

Meanwhile Andrew explained: ‘The Duke was very firmly pro-Nazi and a firm supporter of Hitler.’

Wilson added: ‘He felt like a wounded child and the person who came into the playground to pick up the wounded child was Adolf Hitler.

‘In May 1939, the Duke, who had an office in Paris, made a broadcast in which he said Britain should be doing all in its power to come to terms with Nazi Germany and not have a war.’

Anna added: ‘He didn’t listen to advice that didn’t suit him, he was a naive fool.’ 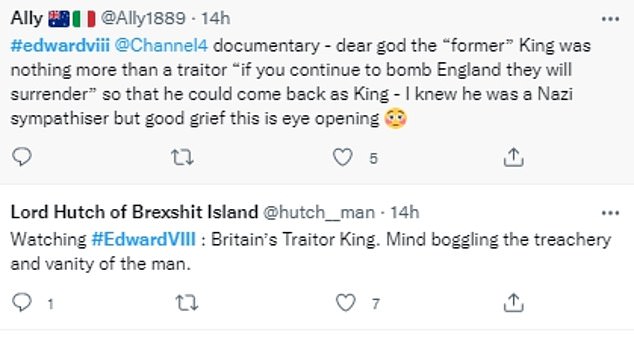 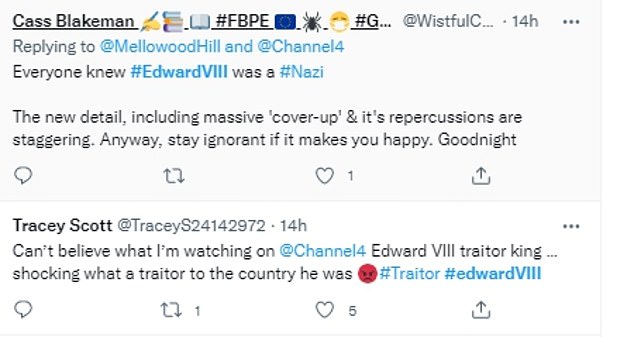 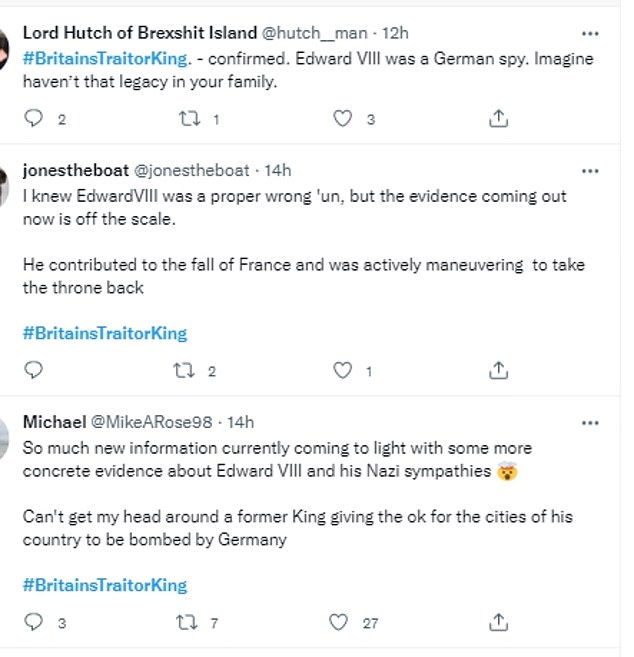 Many of those watching the programme were left horrified by the revelations, calling Edward a ‘traitor’

Wallis Simpson and King Edward VIII: A scandal that rocked a nation

January 1931 – Wallis meets Prince Edward in January 1931, after being introduced via her friend Lady Furness

August 1934 – Wallis admits she and Edward are no longer just friends, after joining him on a cruise

January 1936 – King George V dies. Edward asks Wallis to watch the proclamation of his accession with him from St. James’s Palace

August 1936 – The pair enjoy a cruise around the Adriatic sea with friends. Details of their relationship appear in the American press

June 3, 1937 – The couple get married in the south of France. Wallis was formally known as the Duchess of Windsor, but was not allowed to share her husband’s title of ‘Royal Highness.’

In a May 1939 speech which was never broadcast, and accessed by the historian through the BBC Sound Archive reference card, the Duke asked the British to surrender to Hitler before the war began.

Wilson said: ‘The BBC were furious, they felt the impartiality of the BBC would be infringed and they felt the Nazis were using the duke for their own propaganda, which they were of course.

‘No one quite knew what was going to happen in May, but later it was fairly obvious.’

Anna explained the Duke was ‘terrifyingly open to Germany and ‘what they could offer him.’

Meanwhile Andrew said there were repeated references to the Duke’s ‘hope to be restored to the throne’ by the Germans in telegrams.

Anna explained: ‘Anyone who could make him feel powerful and important, he succumbed to that.

‘His motivation was his sense of rejection from England. i think he never really got over that.’

The documentary goes on to detail how the Duke gave information on weaknesses in the French military to a Nazi informant.

The former King was living in Paris and had written four reports on the French First Army describing its poor leadership and morale.

The reports were ignored by British officials but captured German diplomatic cables showed that Edward then gave the information to his close friend, Nazi informant Charles Bedaux.

The subsequent German invasion of France targeted the weaknesses Edward had identified.

During the invasion, Edward and Mrs Simpson fled to Lisbon, Portugal where they socialised with German agents and sympathisers. 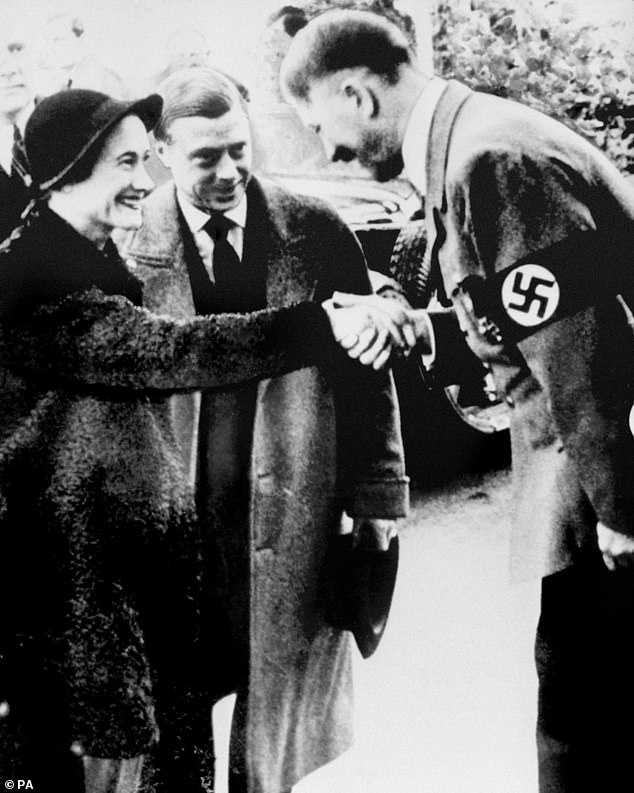 The former king, who abdicated in 1936 to marry the divorced American socialite Wallis Simpson , also passed information to Germany that aided the fall of France in 1940, according to a new documentary

In another captured diplomatic cable from the German ambassador to Portuguese authorities, the Duke is said to have told representatives of Francoist Spain that ‘continued severe bombing would make England ready for peace’.

Andrew said: ‘Edward wanted to come back as a pro-Nazi leader. He characterizes himself as a firm supporter of a peaceful arrangement with Germany.

‘He was so disloyal to his brother, he was calling for the bombing of Britain as a way of subjugating them.’

‘The Duke encouraged the Germans to bomb London and indeed, that’s what they do.’ 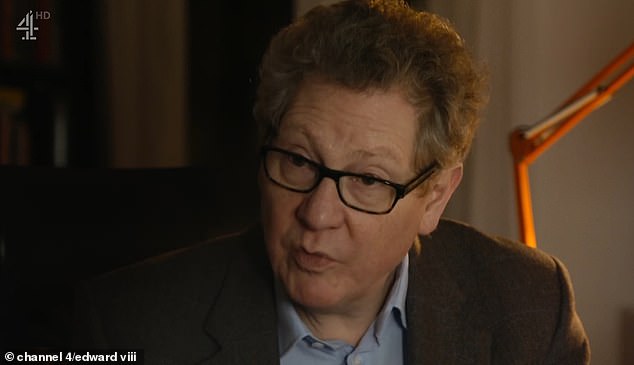 On 13th September 1940, they bomb Buckingham Palace, literally missing the King and Queen by feet.

He continued: ‘Let’s look at it in personal terms, this is a man who will stop at nothing to usurp the throne, even if it requires the death of his own brother.’

Meanwhile Wilson added: ‘In my mind that is the most appalling thing he ever did….to say the people of your own country should be bombed.’

Freddie Sayer, editor of Unherd, questioned if he had a sense ‘vindication would be delivered’ if the ‘whole house of cards come crashing down.’ 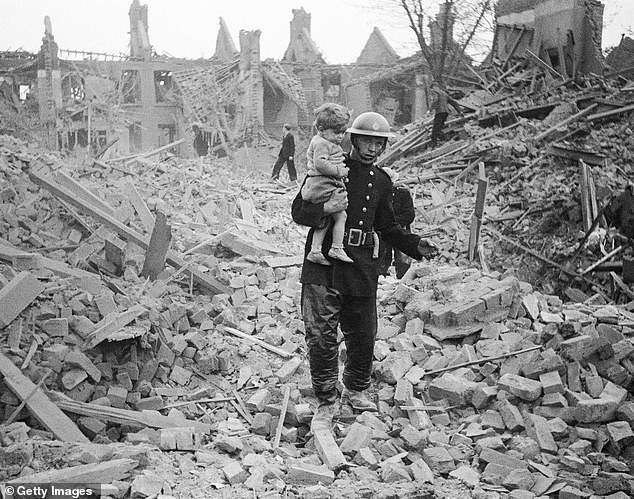 In another captured diplomatic cable from the German ambassador to Portuguese authorities, the Duke is said to have told representatives of Francoist Spain that ‘continued severe bombing would make England ready for peace’. Above: A fireman carries a young child out of the rubble of a building hit by a bomb in London during the Blitz

Then-Prime Minister Winston Churchill removed the Duke from Europe, making him the Governor of the Bahamas.

While travelling there, Edward sent a coded telegram to a Nazi associate saying he was willing to return to Europe.

Dr Lownie argues that this indicates Edward was aware of Operation Willie, the German plan to put the Duke back on the throne as the head of a puppet state.

The allegations are also detailed in Dr Lownie’s upcoming book Traitor King, which will be published in May. 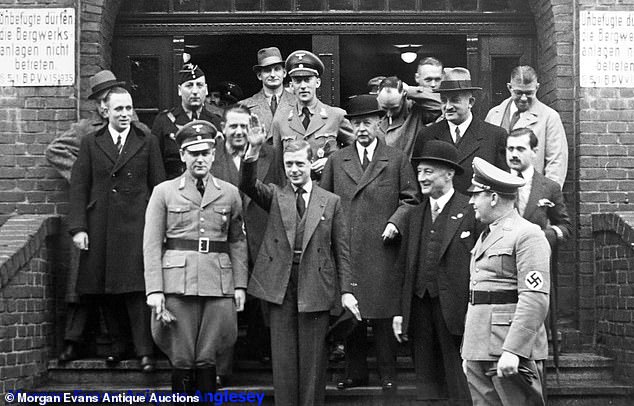 In 1937, Edward and Wallis, met Hitler and his officials during a tour of Germany. Whilst there, Edward was infamously photographed giving a Nazi salute (above)

The documents used by Dr Lownie as evidence have been in the Royal Archives for decades but a recent policy change allowed greater access for researchers with new documents emerging.

In 1937, Edward and Wallis, met Hitler and his officials during a tour of Germany.

Whilst there, Edward was infamously photographed giving a Nazi salute and later also toured industrial facilities and even a concentration camp, whose guard towers were said to have been explained to him as meat stores.

The former king was reported to have said as late as 1941 that Hitler was the ‘right and logical leader of the German people’. 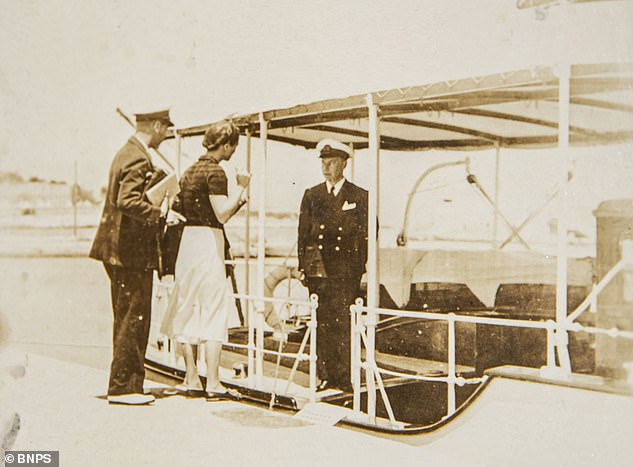 King Edward VIII and Wallis Simpson enjoying a luxurious Mediterranean cruise in the wake of the abdication crisis, which saw him give up his throne for George VI 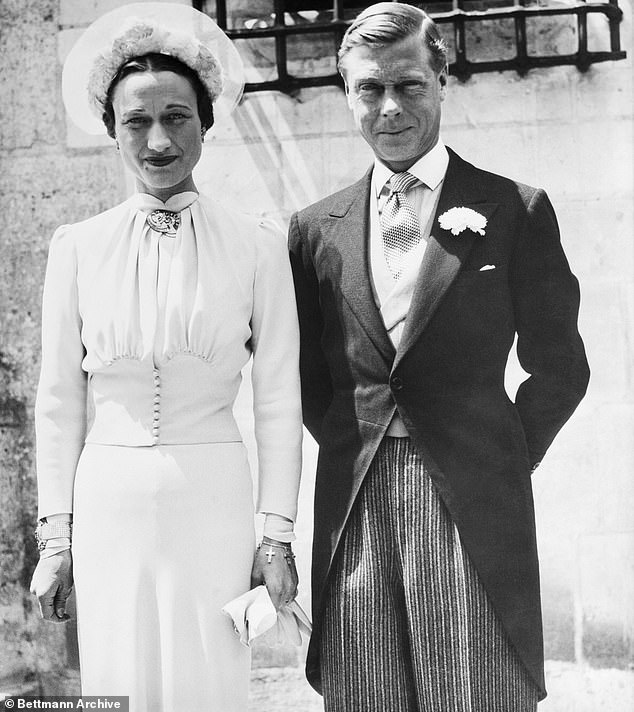 Edward’s proposal to marry Wallis – whilst divorce proceedings with her second husband were still ongoing – sparked a constitutional crisis which culminated in Edward’s decision to abdicate. Pictured: The couple on the day of their wedding in 1937