Vinicius Junior: Benzema is one of the best players in history and Mbappe is a great player 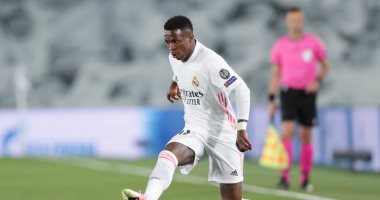 Brazilian striker Vinicius Junior declared that he plays for Real Madrid “as if I were at home in Brazil”, and with the fans returning to the Santiago Bernabeu stadium it looks like “I’m still playing there”.

“Everything was very perfect. We were completely happy to be back and knowing that the fans were with us,” the Brazilian footballer said in an interview published by the Spanish newspaper (AS) on Tuesday, and also talked about the start of a wonderful season for him, where he scored four goals after the same number of rounds.

The 21-year-old international confirmed, “This is the result of a lot of work, training for several hours at Baldebebas, and fighting to improve the ability to make decisions on the field. I have confidence in the coach and in all the members of the coaching staff, this confidence makes me believe that I can fail.” And if I do, I will try again.”

And the player touched on the celebration of his goal against Celta Vigo last Sunday, when he jumped to the stands in the midst of the crowd, which was the subject of criticism, saying, “I liberated a little because the goal made the score (3-2), we came back to our land after a long time and scored again. In fact, it was a hug for the Bernabeu when we met with them.”

Vinicius praised French striker Karim Benzema, saying, “He is one of the best players in history, and I really love playing with him. He always spoke to me on and off the pitch, he helped me, even when I didn’t know if I would succeed.”

As for Vinicius, his compatriot Marcelo is one of his great supporters within the team. “He always knows how to advise me when I am good or when I am bad. He has already told me that I will play here for a long time like him, and I hope that is the case.”

With regard to the Brazilian national team, which leads the South American qualifiers, and who was called to join him recently without being a starter, Vinicius hopes to continue to raise his level to reserve a place for him in the starting line-up for the Canary team, and said, “If you play at the best level with Real Madrid and play regularly, it will be It’s easier to get minutes with my country, it’s happened before.”

He also expressed his opinion about Kylian Mbappe, the French player that the white club tried to sign until the last day of the summer transfer market, saying, “Mbappe is a wonderful player and I love him a lot and I admire him as well. He will certainly have a great season with Paris Saint-Germain, and we will see what he does.” with his future.”

Real Madrid is preparing to play its first match in the Champions League on Wednesday when it is a guest of Inter Milan, and Vinicius hopes to continue to delight the royal fans, as happened in the league matches, and concluded by saying, “I really appreciate the love they give me, they always stand by us, and to work The best is yet to come.”

Glitch (GLCH) rises by 196% after 14 days of a relentless bull ran: here are the best places to buy it

Glitch (GLCH) rises by 196% after 14 days of a relentless bull ran: here are the best places to buy it