From fake fan-tracks to pre-recorded hymns and sanitation stations, the new world has drastically altered match days in Wales.

On Saturday, for the first time in 17 years, the men will play outside Cardiff with no fans – even poor old Shenklin the goat who parades before games has to stay at his barracks – no hywl or haranguing drinkers in sight.

With the country in a ‘circuit-breaker’ lockdown and the Principality Stadium standing by as a Nightingale hospital still, it is out to west Wales to Llanelli and their new normal. 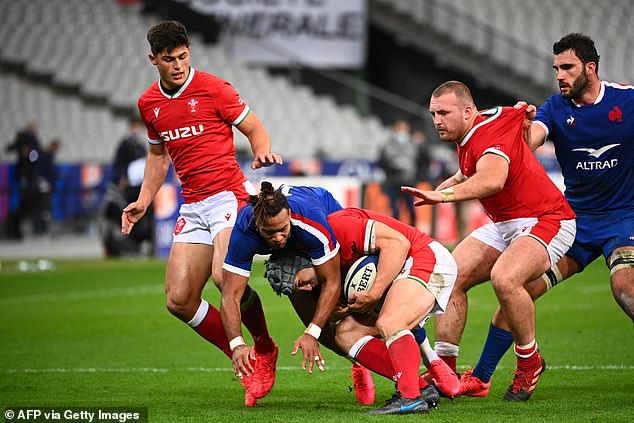 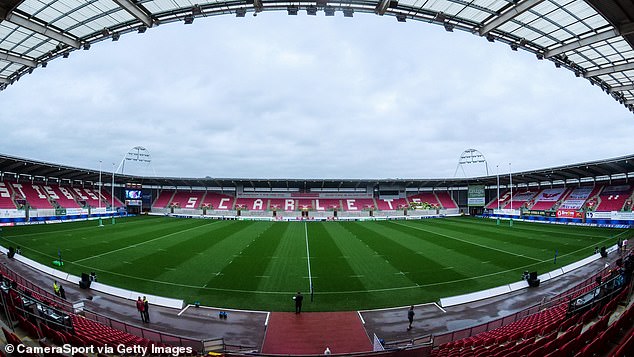 It will be eerie and quiet not rocking and raging like under the roof in the capital. Attendance, officially zero; not a daffodil hat in the place for Scotland’s visit – perhaps the only positive.

For Wales, the team who perhaps rely on their supporters to drag them to results more than any other in the rugby world, there is no place like home.

But through artificial means and colour schemes they hope to re-create all that they will miss.

Alex Luff, the Principality Stadium operations manager, has helped staged Anthony Joshua fights, Take That concerts, the 2017 Champions League final and more than 100 Wales Tests in Cardiff but his task to transform Parc y Scarlets firstly into a Covid-safe arena and secondly one fit for an international has been his tallest order.

‘The Champions League Final in 2017 (where Real Madrid beat Juventus 4-1) was a three-year project for one match,’ he explains talking exclusively to Sportsmail.

‘We’ve had to condense that work into a month-and-a-half.’

As the national stadium is now Dragon’s Heart Hospital, taking patients at the start of the pandemic in the spring as the second-largest facility of its type in the UK, Wales had to play away from their ground for the first time in 108 Tests.

But none allowed and Scarlets was chosen for all four of their home autumn fixtures, starting with Scotland in the Six Nations this weekend.

The last time a men’s Test was played there was in 1998 – at the old Stradey Park against Argentina – Saturday will be world’s apart in many ways.

‘We’ve got to try and transform Parc y Scarlets into our home,’ adds Luff.

‘We want the team to feel as if they’re coming into familiar surroundings – a lot of them do play there for their region, one of the reasons we used the venue in the first place. 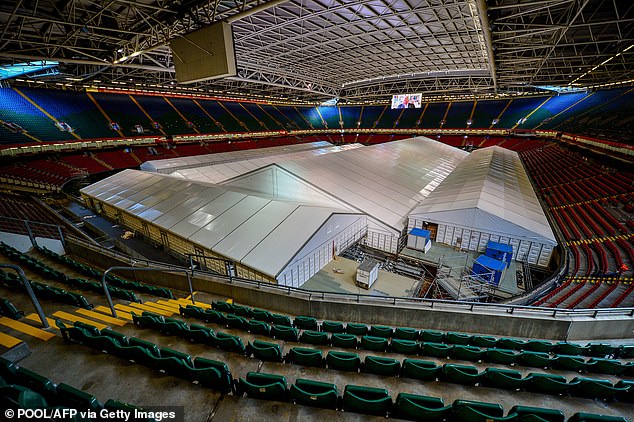 ‘The venue will be transformed with a lot of red branding to make it feel like home.

‘The elements you come to love and expect from the Principality Stadium will be there, albeit slightly reduced and watered down.’

That means smoke, flames and music for the teams’ entry and when tries are scored.

Those few in the ground will not hear much aside from the snap, crackle and pop of an international – with added swearing.

But for television viewers, an atmosphere will be added.

‘The Six Nations have worked with the BBC for the Scotland game and Amazon for the Nations Cup and there will be a specific home noise,’ explains Luff.

‘They will be using soundscape from a previous Wales game at the Principality and using that as the background noise for Parc y Scarlets.’

So expect the fake fans to be ‘siiing-ing Hymns and Arias, Land of my Fathers’, Ar hyd y nos.’

‘I’ve that on my playlist!’ says Luff. 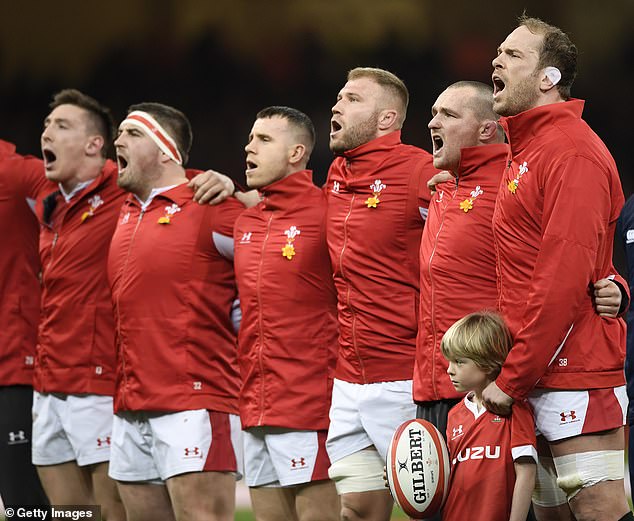 Come anthem time on Saturday, Wales have enlisted the help of a 250-strong choir 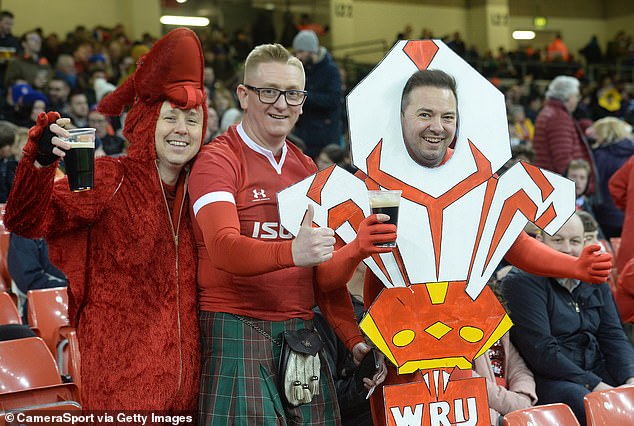 ‘You’ll definitely hear Hymns and Arias and all the Welsh songs, although virtually, on the match-day broadcast.’

On Friday, after the team’s usual ‘captain’s run’ training session the whole stadium will be locked down, security swept and deep-cleaned.

Everyone who attends will complete a health questionnaire and have their temperatures checked, before accreditation is issued for either the red zone – for essential staff and players – or amber zone – for media and stadium staff.

Attendance will be logged by the NHS track and trace app, face-masks are mandatory for all but the players and hand-gel will abound.

The pre-match setup will be familiar. Scotland will emerge first, then Wales – with smoke and flames filling Llanelli skies.

The teams will be wetter than usual, though, with a yellow warning of rain set for Carmarthenshire and no roof now to protect them.

Come anthem time Wales have enlisted the help of a 250-strong choir — from Cor Meibion Taf, as well as Pendyrus, Pontarddulais and Cardiff Arms Park Male voice choirs — and a recording from The Cory Band to bring Hen Wlad Fy Nhadau to life, hoping to tingle spines across the country. 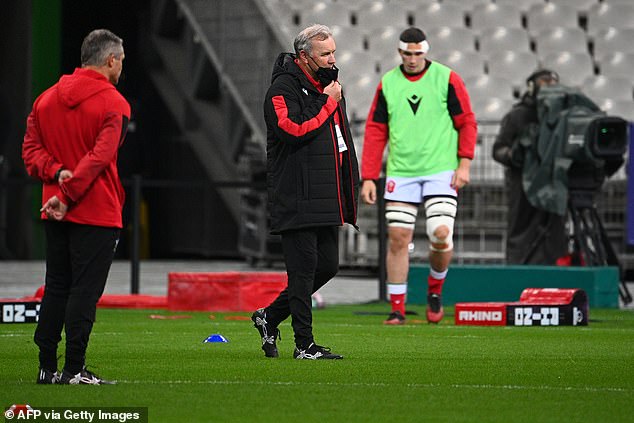 ‘A standard acoustic play-out of a track doesn’t really work, so ours comes with a proper supported choir back-drop,’ says Luff.

‘There will be an additional PA pitch-side, so the players can hear it and sing along properly, to make sure it doesn’t bounce around an empty stadium. It’s a moment for them.

‘Hopefully Alun Wyn Jones is becoming the world’s most capped player, so we want to make sure everything we do ensures we can create those moments we do best.’

At kick-off the rugby will take over. Wales will be in Llanelli until December as their fans are on sofas; it will take two months to fully de-commission the Principality Stadium and convert it level-by-level back into the famous rugby venue.

Whenever that day comes – financially and spiritually – Wales will be desperate to return home.

‘Having fans back will bring the soul back and what live sport is all about,’ concludes Luff.

‘Nothing beats a packed out stadium. The fans make the spectacle – them coming back safely can’t come soon enough. Hopefully that will be in February for the Six Nations.’

How the Champions League’s ‘Swiss’ revamp will look – with Liverpool facing Real AND Bayern!

Photos have surfaced of Brittany Hockley getting into a heated conversation with Etihad Airways staff over her excess-baggage fee...