It might be rugby’s fiercest rivalry, but the boundaries between England and Wales are now more fluid than ever.

In Wales’ Autumn Nations Cup squad are 20 players who were either born, raised, at least party developed in England, or now ply their trade over the Severn Bridge.

And while there is no questioning their allegiance, whether by accident or design, Wayne Pivac has assembled one of the most Anglicised Welsh teams ever. 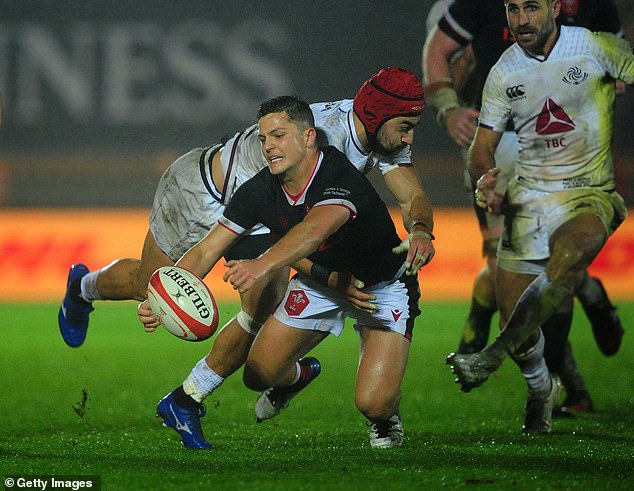 In his first press conference as coach last November he said: ‘We’re working closely to have as much information as possible on every Welsh player out there who is eligible.’

Of the 10 new caps under Pivac six, five of whom will all be involved against England, have been developed as Premiership players.

‘A good way of creating depth is looking over the bridge,’ says Richard Whiffin, who coached at Gloucester and London Irish before becoming the Scarlets’ attack coach.

‘The competition in England is so strong that if you’ve got someone performing in the Premiership they’re likely to be ready for that next level.’

As Wales only has 83,120 registered rugby players – only 10,000 more than Sri Lanka, down in 12th on the global list and around 300,000 short of England’s tally – boundary blurring is understandable.

While the likes of Tomas Francis, Jonah Holmes, Williams, Tompkins and Rowlands fully embraced their Welshness later in life many migrate east for education – like Rees-Zammit and Ross Moriarty who went to Hartpury College, Sheedy to Millfield, Lloyd to Clifton College and James Botham to Sedbergh.

‘Some of the scholarships offered by private schools in England are too good to turn down for families,’ Whiffin adds. 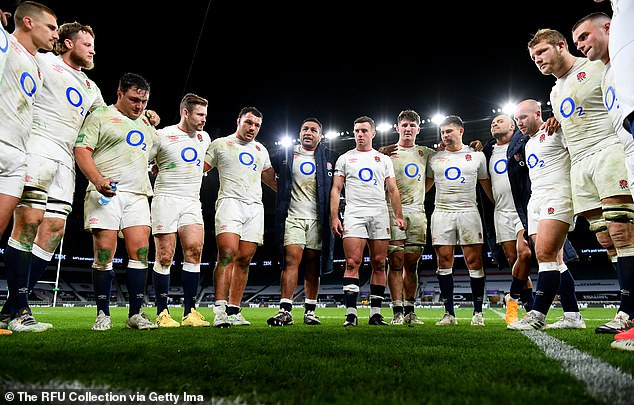 Eddie Jones’ England await in Wales’ next match, facing the Group A leaders on Saturday

‘Those kids get hoovered up into the English system.’

For others, like Josh Adams and Cory Hill, it is more brutal. Both were spat out of the Welsh system and had to rebuild young careers at Cinderford and Moseley respectively.

Hill went back quicker than Adams. Both are now at Cardiff Blues and Welsh Test players – Adams does not believe he would have achieved that without his Worcester stint.

‘I couldn’t say I’d be sitting here if it wasn’t for that exposure,’ he says.

‘Playing against top international wingers most weeks helped me.’

Adams sees it in centres Tompkins and Williams too – now at Dragons and Scarlets but developed at Saracens and London Irish. 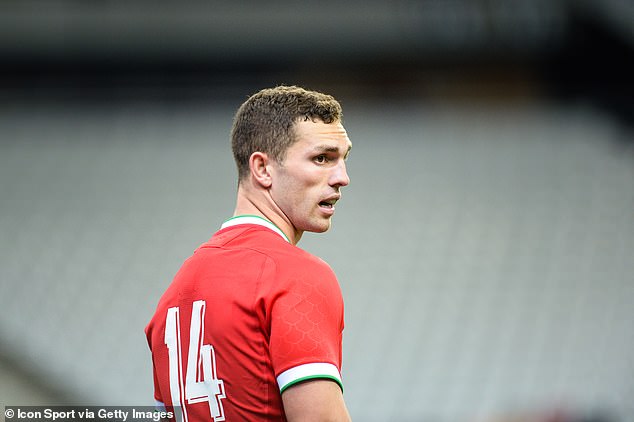 George North is among the players with links to England, having been born in King’s Lynn 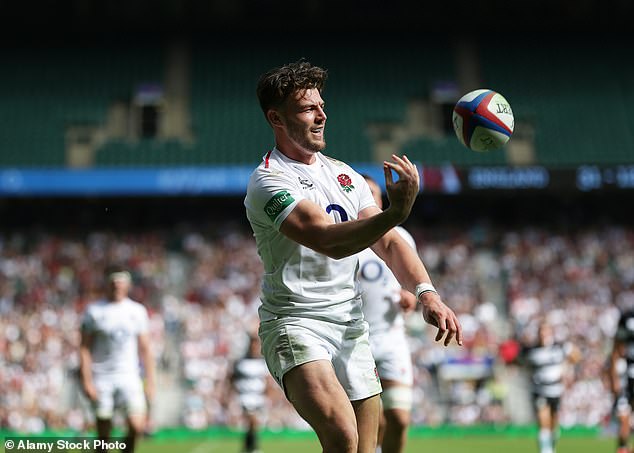 Johnny Williams has even played in an England jersey, lining up in an uncapped match in 2019

‘Nick, who’s come from such a winning culture, you can see the winning mentality in him,’ Adams adds.

‘Johnny started playing for Irish at a fairly early age. You can see that in his physicality.’

The problem the Welsh regions have is three-fold. With just four teams there are only 60 starting shirts to fill on any given Pro14 weekend, the league itself lacks true competitive bite as it is dominated by the well-funded Irish, and under it the drop-off is enormous.

No wonder many end up in England.

‘I don’t think the Welsh Premiership is at the level to really kick someone on,’ admits Whiffin.

‘You have to have a different stepping stone, like The Championship or Premiership.

‘Callum Sheedy played for Jersey for a season, as did Kieran Hardy. You’ve got to be creative in giving them game-time. 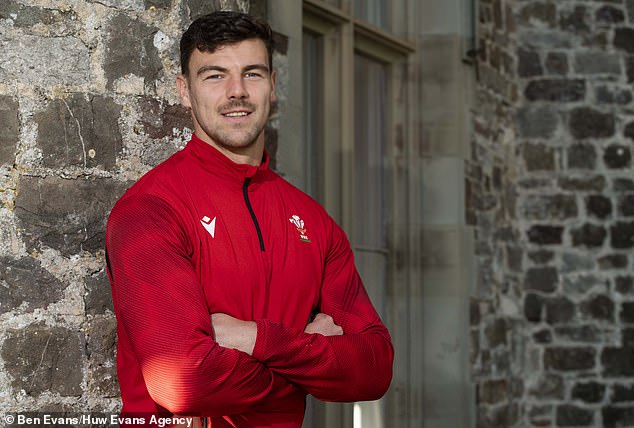 ‘There are only four regional No 10s that can play every given week. Callum has run the show for Bristol for a number of years now and they’re at the top end of the Premiership so has said “I’m ready Wayne”.

‘Because the national team in Wales run the top 38 players and in Ireland they run them all you don’t see your best players most of the time in the Pro14, so young players do get game-time early. It waters the competition down though.

‘Whereas in England if you get a youngster coming through they are top quality as they have to battle with deeper squads.’

Whether they leave, or start outside Wales, they come under the ‘Exiles’ blanket.

Established in 1990 as a social opportunity, it now has turned into a strategic recruitment tool, especially now the residency qualification rule is stretching to five years, erasing out many ‘project players’.

With such a network of players, scouts, schools, clubs and academies you would think there would be many Welsh boots on the ground in England. 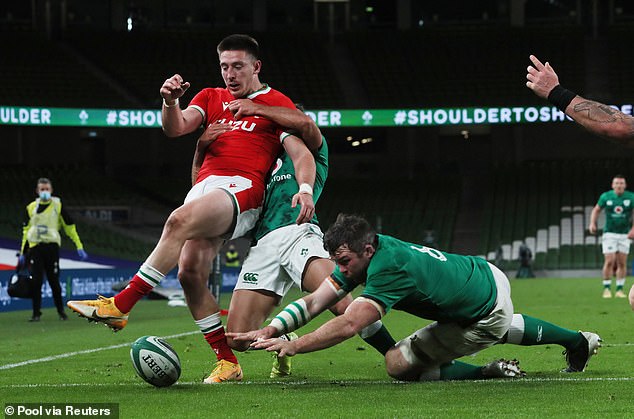 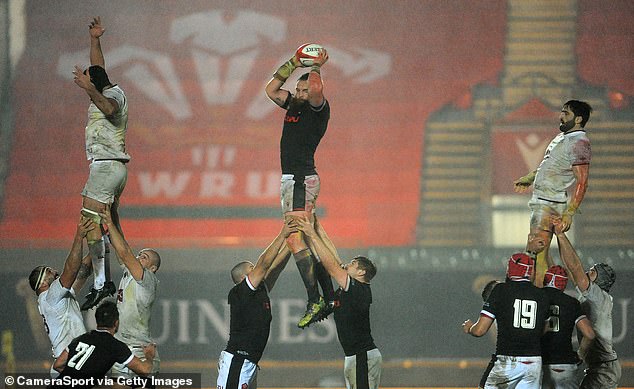 ‘If you want to come to our Christmas do it will be a table for two!’ says Gareth Davies who runs the ‘Exiles’ programme practically alone.

Via word-of-mouth, a big spreadsheet, many meetings with regions, the national squad, and countless other institutions Davies tracks those that might one day wear the three feathers.

‘It makes logical sense to look outside Wales,’ says Davies, who worked closely with the families of Rees-Zammit and Williams – who came to his first ‘Exiles’ camp with Welsh father Gareth in Berkshire at 14.

‘It’s about building and developing a relationship, monitoring their progress, before the time is right for them to come over to Wales.’

The theme of this Welsh squad may soon become the norm, then. Twenty-six players across the Wales Under-18s, 19s and 20 were ‘Exiles’ last year – the next cabs off the rank are lining up.

Bristol’s Harry Randall, who grew up in the Amman Valley but represented England Under-18 and 20 while at Hartpury, is top of the list. 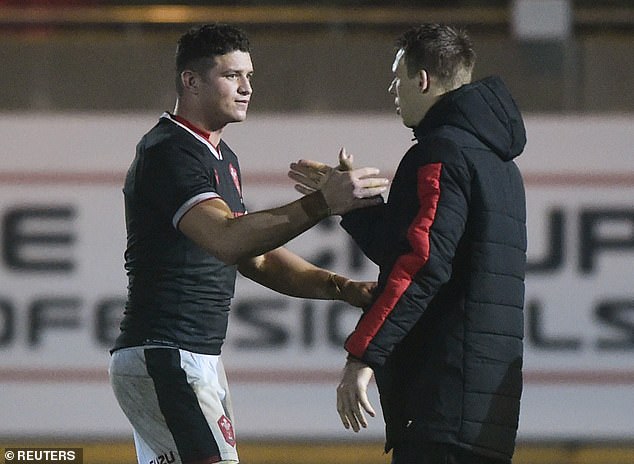 James Botham (left) is the grandson of English cricket icon, Ian, and had his debut last week 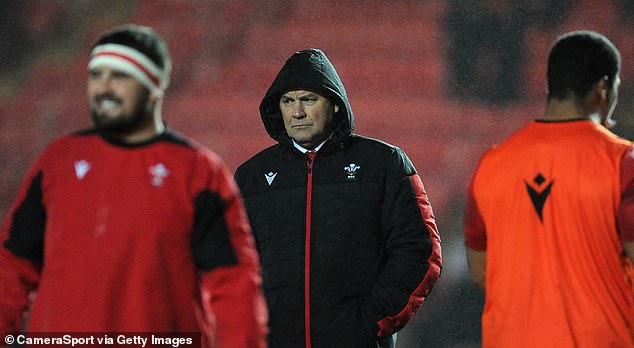 ‘He’s international quality – it’s who picks him first, Wales or England to make him make a decision as he could play for both,’ says Whiffin who coached him at Gloucester.

There could be future fights over Leicester prop Joe Heyes, recently in an England squad, and flanker Tommy Reffell who England boss Eddie Jones is seemingly keen on.

Exeter have snapped up a pair too, out-bidding the regions – powerful back Corey Baldwin, 22, and the wonderfully-named teenager Christ Tshiunza who came from the Congo to Cardiff and at 6ft 6in is already drawing comparisons with Maro Itoje.

So watch out – the Anglo-Welsh are coming. 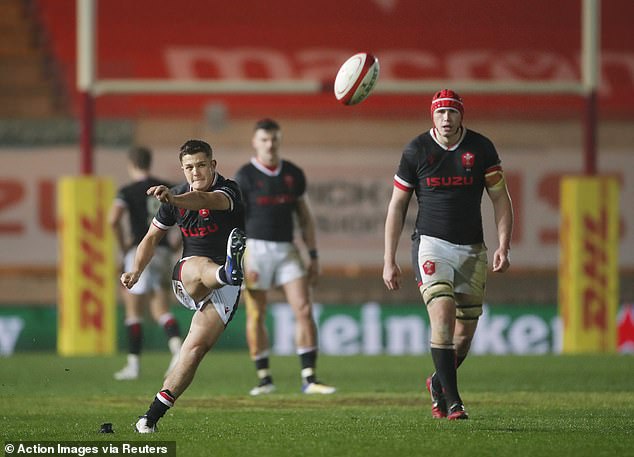 Went through Worcester academy after Scarlets rejection and a season at Cinderford. Now at Cardiff Blues.

Born in Ascot, before migrating to Australia. Now at Scarlets.

Plays for Northampton, having moved from Ospreys.

Played for Saracens for a season. Now back at Cardiff Blues.

Born in Solihull. Raised in Bancyfelin and plays for the Scarlets.

Plays for Bath, having moved from the Dragons.

Spent a season on loan at Jersey before breaking into Scarlets squad.

Spent a year at Moseley having been released from Cardiff Blues. Now back at Cardiff via Dragons.

Plays for Bristol, having joined at 17 while at Clifton College.

Played for Gloucester for six years and attended Hartpury College. Represented England U18 and U20 before switching back to Wales, who his father and uncle played for.

Born in King’s Lynn to a father from Yorkshire. Played for Northampton for five years.

Born in Hammersmith, attended Rugby School and Oxford University before joining Wasps. Spent a season on loan at Jersey. Has a Welsh father.

Attended Millfield School for Sixth Form, leaving Corpus Christi School in Cardiff, then joined Bristol. Has played for Clifton, Dings Crusaders, Cinderford, Jersey and an England XV against the Barbarians.

Born in Sidcup, played for Old Elthamians, Old Albanians and then Saracens. Represented England U18, U20 and the Saxons before switching to Wales – qualifying via his granny.

Born in Weston-super-Mare, grew up in Reading, attended the Forest School and St Paul’s College in Sunbury, played for Redingensians and London Irish before moving to Newcastle. Represented England U20 and an England XV against the Barbarians before switching to Scarlets and Wales, where his dad is from.

Spent a two-and-a-half seasons at Saracens, when leaving home region Scarlets. Now back at Scarlets.

GQ Men Of The Year Awards 2020: John Boyega leads winners on the red carpet at the virtual ceremony