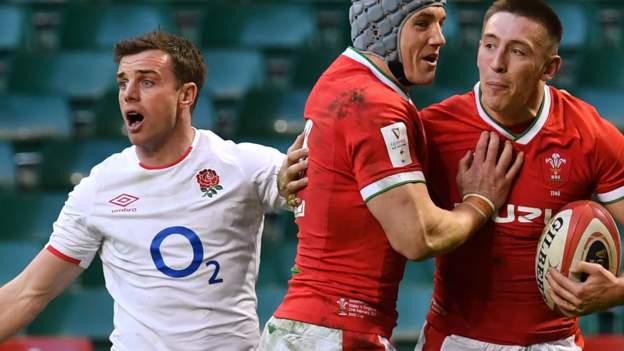 If England had shown the same rock-steady discipline on the pitch as they did in the touchline interviews, the result in Cardiff might have been very different.

Head coach Eddie Jones said “it is what it is” of two controversial first-half calls that resulted in Wales tries and contributed to a 40-24 Six Nations defeat – and the home side clinching the Triple Crown.

“We can’t argue with the referee. The result’s there and we’ve got to accept it,” he added.

“They’re huge decisions. We can’t debate it, we are not allowed to debate it. All I will end up with is a fine and that won’t help anyone.

Captain Owen Farrell was, outwardly at least, equally philosophical after the match, but clearly upset during the game.

“There is no point in talking about it now. That is for everyone else to talk about,” he told BBC Sport.

It certainly did get supporters of both sides talking.

These were the two first-half calls that sent social media into meltdown and fans searching the rulebook small print.

The first controversy came with the scored tied at 3-3.

England captain Farrell was penalised for failing to roll away from his own tackle on George North.

French referee Pascal Gauzere told him to tell his team to “change their behaviour” and said “time off” indicating that the clock was stopped.

Farrell’s team huddled around him in front of the posts, the drinks carriers came on.

Wales fly-half Dan Biggar asked Gauzere to tell him when the time was back “on” and he could take the penalty.

With England still grouped around Farrell, Gauzere blew the whistle, Biggar kicked wide and Adams claimed the ball for a try, much to England’s bewilderment.

Former England and British and Irish Lions captain Martin Johnson: “I am speechless. That is appalling referring. Owen Farrell’s wingers have come in to the conversation. They’ve not had time to reset.

Former Wales and British and Irish Lions captain Sam Warburton: “I would be fuming if I was Owen Farrell. If you’ve been told you can speak to your team and are in the middle of a conversation… I would be livid.”

Wales wing Louis Rees-Zammit attempts to gather Adams’ kick ahead. The ball drops down, and apparently forward, off his hand, deflecting back off his thigh and then forward off the knee of the chasing Henry Slade – all without the ball touching the floor – and towards the England try line.

The loose ball is snaffled by Liam Williams who slides over to score – and put Wales into a 17-6 lead.

“But the letter of the law is it’s hit him and not the floor and not another player so it’s not deemed a knock-on.”

Johnson: “I would have thought he’s lost control of the ball. Everyone who has ever played rugby will think that’s a knock-on.”

Warburton: “It went down and backwards. We’ve seen those given as knock-ons and they haven’t as well.”

What is the law?

Wales’ victories over Ireland and Scotland in the first two rounds came after their opponents were reduced to 14 men by red cards.

When asked if the decisions changed the course of Saturday’s game, Jones said: “Well, they get points maybe they don’t deserve and we have to fight to get back into the game.

England gave up 14 penalties to Wales’ nine, including four after pulling back level at 24-24 just after the hour mark following tries by Anthony Watson and Ben Youngs.

“There were times we gave away penalties we shouldn’t have. It was just from the effort and sometimes you get in situations where emotionally you struggle because of the circumstances and you try too hard,” added Jones. “That happens.

“Whenever you get beaten and bettered by a penalty, then discipline is an issue. But there were bigger issues in the game than that.

“Wales were worthy winners. We take full responsibility and don’t blame the referee. But sometimes there are circumstances that happen that are difficult to handle and we weren’t good enough to handle them.”

Wales counterpart Wayne Pivac said the referee was lenient on England in some aspects with star second row Maro Itoje giving away five penalties in total, without being shown a yellow card.

Defeat in what Jones had labelled a “make-or-break” third-round fixture all but ended England’s hopes of a successful title defence.

Wales clinched the Triple Crown and stayed on course for an unexpected Grand Slam.

They take on Italy in two weeks and then France in the final round, while England take on France at home before travelling away to Ireland.

Brian, Newport: Total professionalism from Owen Farrell in the post match interview. We all know how bad the ref was, let’s hope somebody in authority challenges this refereeing performance.

Chance Hooper: We can blame the ref for two dodgy Welsh tries… but Ford, Farrell, Youngs and Daly did nothing but aimlessly kick. Our tactics are still one dimensional.

Andrew Norreys: Substitute all the officials at half-time please.

CH, Warwick: Well, the gods are smiling on Wales in this Six Nations. Sendings-off, weird tries, fine-margin decisions going their way. Make the most of it while you can, I suppose.