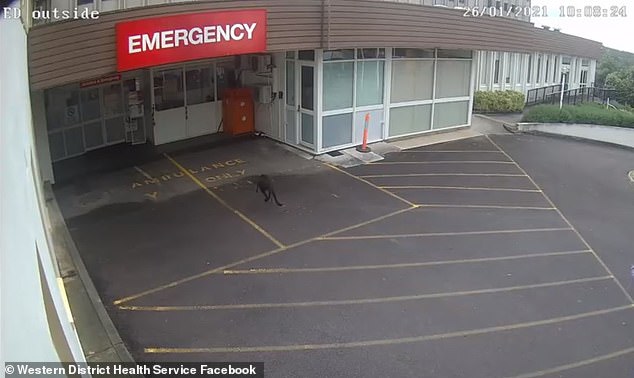 A curious wallaby bounced straight up to a hospital door and hops through the emergency department.

CCTV filmed the adorable marsupial named Wally making his way to Hamilton Base Hospital emergency department in Victoria on Australia Day about 10am.

Two surprised nurses at the front desk stood up to see Wally making his way around the emergency room without a care in the world.

One of them then begins recording the exciting encounter as curious Wally hops around.

Wally then heads back to the exit and appears to startle a visitor who steps back and peers inside to get a better view of him.

He takes one more tour around the emergency room before eventually hopping back out.

‘It’s wonderful to have such a close encounter with what is generally a very shy creature,’ he said.

‘We have had an incredible year in the context of the pandemic and it’s nice to have some lighthearted moments to reflect on.’

This is not the first time an animal has made its way to the Hamilton Base Hospital emergency eepartment.

Several years ago, a koala visited and delighted nurses and patients.