London through a little girl’s eyes: Child watches police and paramedics fight in vain to save life of 15-year-old boy who was stabbed to death

A toddler watched police and paramedics fight in vain to save the life of a 15-year-old boy who was stabbed to death in a double knife attack in south London earlier this week.

Joseph Marfini, 15, died in hospital after being knifed during the gang fight which broke out in front of horrified shoppers outside Wandsworth Sainsbury’s on Thursday afternoon.

The girl, who is thought to be aged around two years old, could be seen with her face pressed up against the glass inside the shopping centre as paramedics and police desperately tried to save Marfini’s life outside.

After some time, the girl’s mother realised what her daughter was looking at and moved her away from the window, the Evening Standard reported. 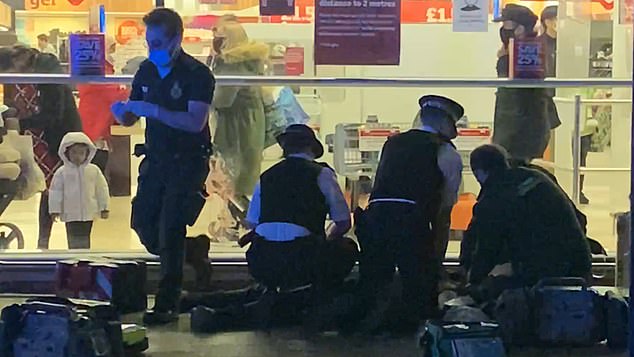 A supermarket worker told the Standard: ‘It was a horrible thing for that little girl to see. The boy injured outside Sainsbury’s was in a terrible way.

‘The paramedics worked so hard on him giving CPR. Loads of people were still shopping. Staff were trying to do whatever they could to help.’

Another witness said: ‘It was totally shocking. It was right outside the store. There was a group of other boys looking on and shoppers inside.’

A shopper said: ‘It was an awful thing for the little girl to see.’

Today Imran Boujdellal, 19, was charged with the murder of Marfini. Two other teenagers have also been arrested in connection with the investigation, police said.

A second 15-year-old boy was also taken to hospital with stab wounds which have been assessed as being non-life threatening.

Murder cops are carrying out enquiries and a post-mortem examination is due to take place, Scotland Yard said.

Joseph is the fourteenth teenager to be murdered in the capital this year.

Traumatised supermarket staff were sent home from work after many witnessed the incident.

Onlookers told how officers shouted, ‘this is a crime scene – get back, get back’, as horrified shoppers witnessed the bloody aftermath outside the shop as paramedics administered CPR.

Detective Chief Inspector Vicky Tunstall, of the Met’s Specialist Crime Command, told the Standard: ‘My deepest condolences are with the family of this young man.

‘I want to reassure them that my team and I are working to give them the answers they deserve.

‘While our investigation is still in its early days, it would appear that an altercation occurred between two groups of males in the Garratt Lane area, outside Sainsbury’s, at around 4.50pm on Thursday evening.

‘It was during this altercation that the victim was stabbed and sadly, later died.

‘This was a busy area, very near to the shopping centre within Wandsworth.

‘There will be people who saw or heard something suspicious that could help us to piece together the final moments for the victim and possibly identify who was responsible. It is these people we urgently need to speak to.’

She added: ‘All calls will be treated with sensitivity and confidentiality.’

Police appealed for anyone with information, video or images that could help the investigation to call 101 reference CAD 5042/29