A war memorial has been vandalised after thousands of revellers descended on a park to enjoy the hottest day of the year so far as lockdown restrictions eased.

Pensioner Tony Foulds, 83, who has tended the memorial for seven decades, made a desperate plea for vandals to stay away from the monument in Endcliffe Park, Sheffield, after it was targeted on Tuesday.

US flags were torn down from the memorial which is dedicated to ten American soldiers who died when the B-17 Flying Fortress, known as Mi Amigo, crashed in the park on February 22 1944.

Mr Foulds was eight when the badly-damaged bomber limped over the roofs of nearby houses and crashed into a wooded area, apparently to avoid him and his friends who were fighting on the grass.

In a video posted to Twitter by Sheffield councillor Shaffaq Mohammed, Mr Foulds said: ‘I’ve had a lot of damage done and my flags torn off and chucked onto the floor.

‘Please, whatever happens don’t come near the memorial. For my sake, as well as these lads.’

Mr Foulds has dedicated his life to the memory of the airmen he never met, spending up to six days a week tending the memorial since it was established in 1969.

Mr Foulds, who lives in Lowedges, Sheffield, said: ‘It’s more than bravery, what they did. They saved me.’

He discovered the damage when he made his visit to the memorial on Wednesday and ‘sat down on the floor and had a cry’, he told The Star.

The memorial’s two largest flags had been damaged beyond repair after being ripped off their poles, Mr Foulds said. 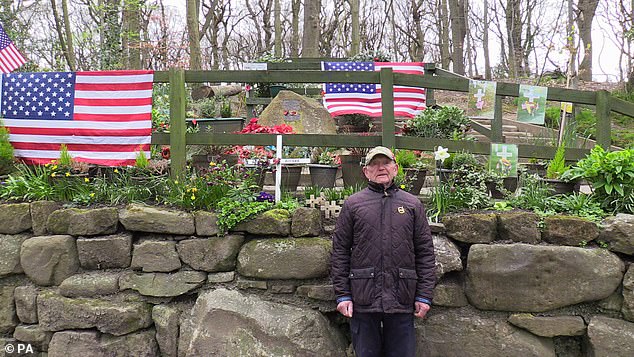 Pensioner Tony Foulds beside the war memorial to the victims of the B-17 Flying Fortress, which crashed in Endcliffe Park, Sheffield, on February 22 1944 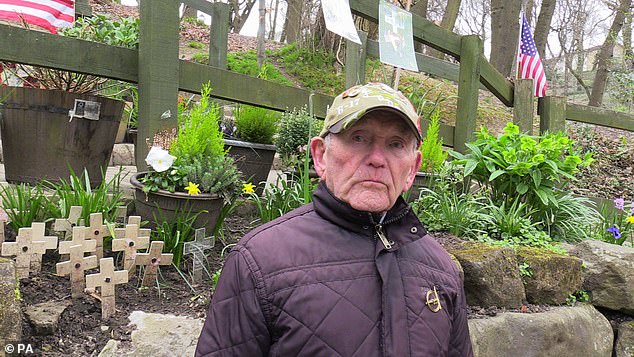 Mr Foulds was eight when the badly-damaged bomber limped over the roofs of nearby houses and crashed into a wooded area, apparently to avoid him and his friends who were on the grass 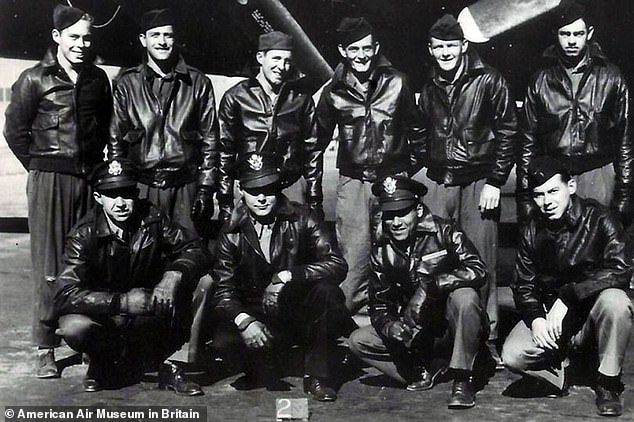 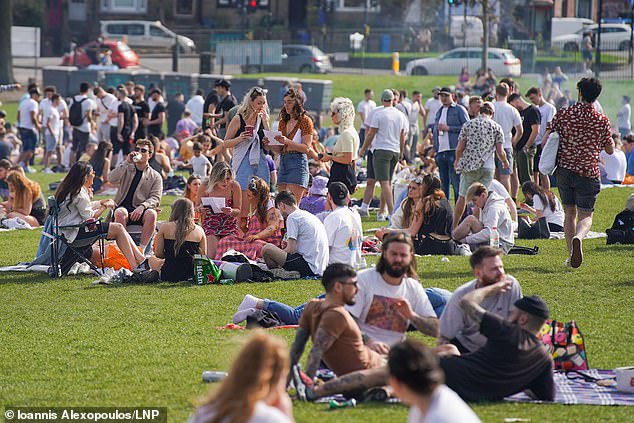 Police said it had been vandalised on Tuesday, when an estimated 7,000 revellers descended on Endcliffe Park in Sheffield to enjoy the warm weather

The ten US airmen killed in February 1944 crash 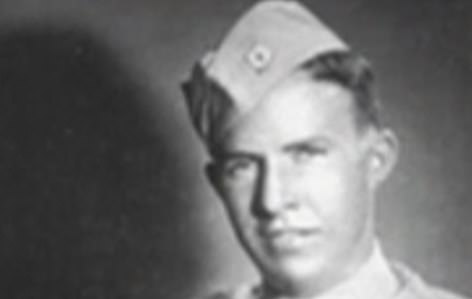 He told The Star: ‘I don’t know if they are people who don’t like America but I am really upset about it. First the council pulled one of the trees down and now someone has done this.’

The 83-year-old told the publication that he will not be beaten by the mindless vandals and plans to fly new flags today.

Police said it had been vandalised on Tuesday, when an estimated 7,000 revellers descended on the park as temperatures soared beyond 75F (24C) and socialising was permitted under the rule of six in England.

CCTV footage from the park is being reviewed by South Yorkshire Police.

In response to councillor Mohammed sharing a video of Mr Foulds plea one social media user kindly offered to send the pensioner replacement flags from the U.S.

The Twitter user, by the name of Geoff, wrote: ‘Any idea how I can get a hold of Tony? I’m English living in the states and i’d love to send him some replacement flags including a US Air Force one.’

It comes two years after thousands attended a flypast arranged to mark the 75th anniversary of the crash, following a campaign by BBC Breakfast’s Dan Walker, who bumped into Mr Foulds while walking his dog in the park in 2019.

Walker used the hashtag #GetTonyAFlyPast, which also caught the attention of the Americans – and soon after Mr Foulds was told on live TV that his dream would come true – changing the hashtag to #TonyGotHisFlyPast.

The pensioner broke down in tears as huge crowds applauded and cheered for him as they gathered at Endcliffe Park in Sheffield to watch the aircraft – including F-15E Strike Eagles from the USAF and an RAF Typhoon – pay tribute to the American crew.

South Yorkshire Police superintendent Simon Verrall said in a statement: ‘Throughout the afternoon and evening of March 30, officers were required to respond to a number of reports of anti-social behaviour and damage being caused to the park.

‘Sadly, one of the park’s memorials was also damaged during the evening, which has left volunteers deeply distressed.

‘This activity is not acceptable and will not be tolerated in our open spaces.

‘We are currently reviewing CCTV and mobile phone footage to identify those involved with a view to taking further action.’

Speaking following the flypast at Endcliffe Park, Mr Foulds said of the airmen: ‘They’ve done this, and they’re as happy as anything now.’ 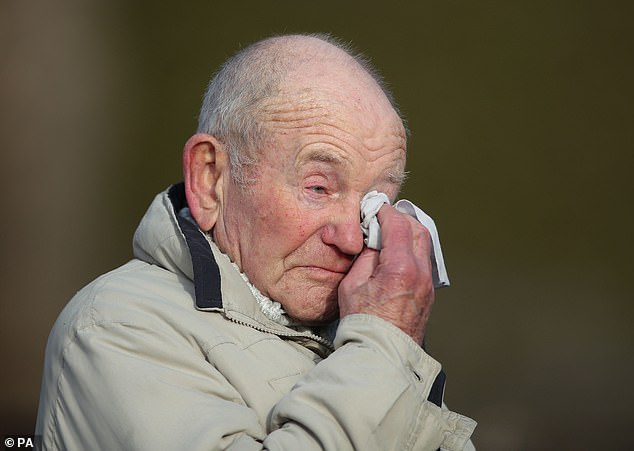 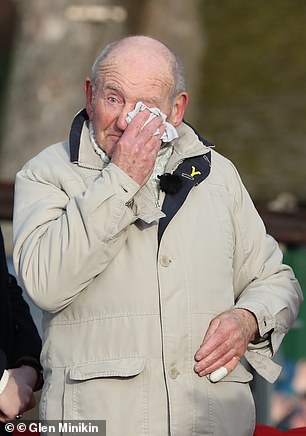 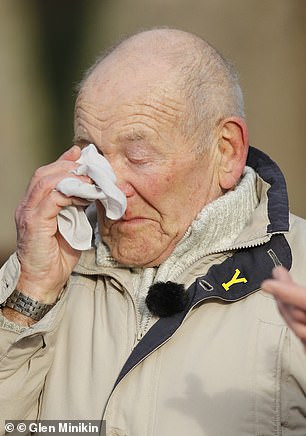 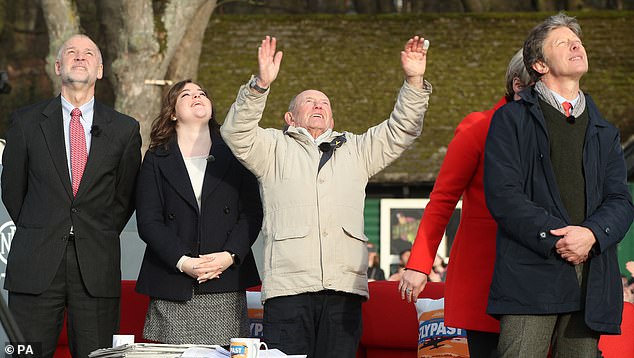 Mr Foulds watches from Endcliffe Park in Sheffield, as warplanes from Britain and the US stage a flypast tribute on February 22 2019 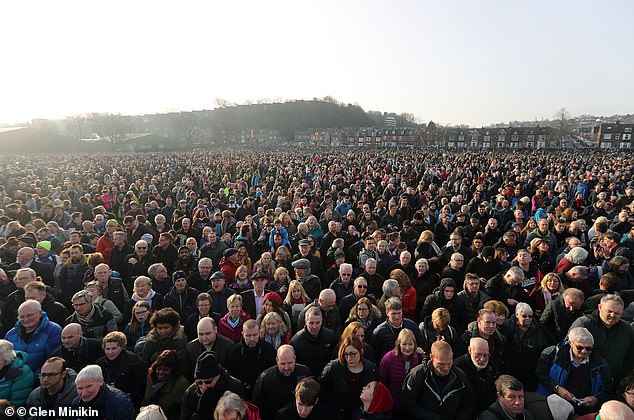 He added: ‘It’s taken 75 years for them to be remembered and what a day, what a day to remember them.’

Mr Foulds said that his only wish now is to travel to the United States to meet some of the crew’s families.

Three of the ten crew of the B-17 Flying Fortress, Mi Amigo, are interred at Cambridge American Cemetery. The seven other crew members who died have been repatriated. 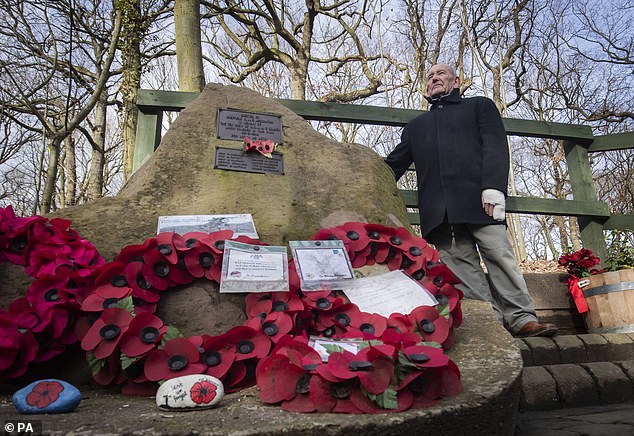 Tony Foulds, 82, is pictured on Wednesday ahead of the Mi Amigo memorial flypast over Endcliffe Park in Sheffield, February 13, 2019 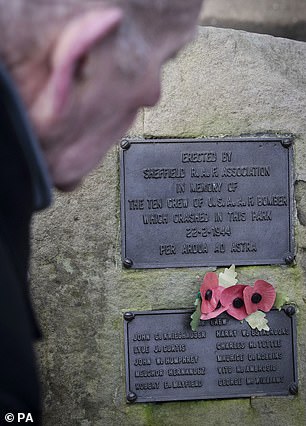 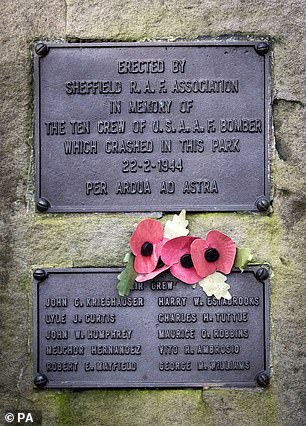 How US pilot saved Tony and his friends from death

Lieutenant John Kriegshauser, a 23-year-old pilot from St Louis, Missouri, was on his 15th mission on February 22, 1944 – and on board with him were nine young men from every corner of America.

The mission was a daring daylight raid on the Aalborg airfield in occupied Denmark, a key fighter base that protected Germany from Allied bombers. Mi Amigo was hit in the attack and limped back across the North Sea, trying to get to a base in Chelveston, Northamptonshire.

But the weather was poor. When the plane broke through the clouds looking for somewhere to land, it was over Sheffield, 80 miles north west.

Tony Foulds was eight years old and had gathered with other children for a schoolyard brawl at Endcliffe Park, an oasis of green surrounded by terraced houses.

After five years of war, including German attacks on Sheffield’s steel and armaments plants, the boys were accustomed to hearing planes. But the sound of this aircraft wasn’t right – with one engine working, spitting oil and daylight visible through the tail.

The pilot circled when he saw the stretch of green, and waved his arms at the children. They waved back. Years later, Mr Foulds realised he was trying to get them to run out of the way.

The plane circled three times, the last time coming in so low it was just above the houses’ chimneys. The pilot could have tried to land on the green, but he didn’t. He turned his plane into the nearby woods, tried to rev up his only working engine and failed to gain altitude. The plane crashed and there were no survivors.

Mr Foulds has been wracked by guilt ever since, over why he could go on with his life, to have children and grandchildren, when the men on that plane were not.

What happened was not the fault of children in the park, crash airman’s relative says 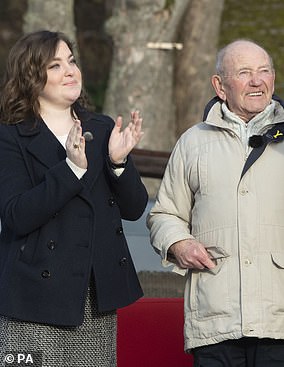 The family of one of the ten airmen who died on the Mi Amigo said they do not want Tony Foulds to blame himself for the tragedy.

Mr Foulds has always said he feels deep guilt for the bomber crash as he believes the pilot crashed into a wooded area as he was trying to avoid him and his young friends on the large expanse of grass in Endcliffe Park.

Today, talking about how his ashes will eventually be placed at the monument to the ten men, Mr Foulds said: ‘Then I shall be able to apologise for killing them. Which is what I did, no matter what everybody says. If it hadn’t been for me being on there they would have had happy lives.’

‘Everyone did the best that they could. Tony has been amazing and loved this park and loved the crew in ways we didn’t even know about.’

The American student, who is studying in London, said: ‘We have nothing but absolute love in our hearts for Tony and view him as an amazing man and part of our extended family as well.’

The 23-year-old said she is the same age as her cousin, who was a bombardier on the Mi Amigo and gave the aircraft its nickname. She said he was originally from Texas but his family moved to Los Angeles in the Great Depression.

He was drafted in the USAF during the war and was extremely proud to be promoted to second lieutenant when he was just 21.

Miss Leo said: ‘Never in my wildest dreams did I imagine that today would be as big as it actually was. Ten thousand people. Being able to be here and to meet Tony and thank him for his service to the memorial.

‘And to be here in the park where it happened and my cousin died, there aren’t the words for it. I’m so grateful to be able to represent my family on this really important day.’

McDonald's Spicy Chicken McNuggets are back: Here's how to get a free order on delivery orders of $20