Warrington will move into Tier 3 ‘next week’ after local bosses agreed to a £6million support package for businesses that will be forced to close.

Discussions concluded this morning with restrictions including the closure of pubs set to come into force by Thursday – though the exact date is to be confirmed.

Hospital capacity is beginning to creak, which councillors said was the trigger point for moving into the ‘high alert’ level. As of today, there are 102 Covid-19 patients across Warrington and Halton Hospitals NHS Trust.

The Cheshire town, home to some 210,000 people, diagnosed 347 cases per 100,000 people in the week to October 18. Data shows 730 people tested positive, and health chiefs say cases are climbing in older age groups.

It comes as a potential Tier 3 lockdown in Nottinghamshire looms after ‘successful’ talks between local leaders and the Government last night about tighter restrictions.

The city, Gedling, Broxtowe and Rushcliffe are expected to go into Tier 3 from next Wednesday, while Mansfield will be excluded.

Nottingham city has had one of the most consistently high infection rates – 610.1 cases per 100,000 people were diagnosed in the week to October 18, second only to Knowsley. But it has dropped sharply since last week (926.7). 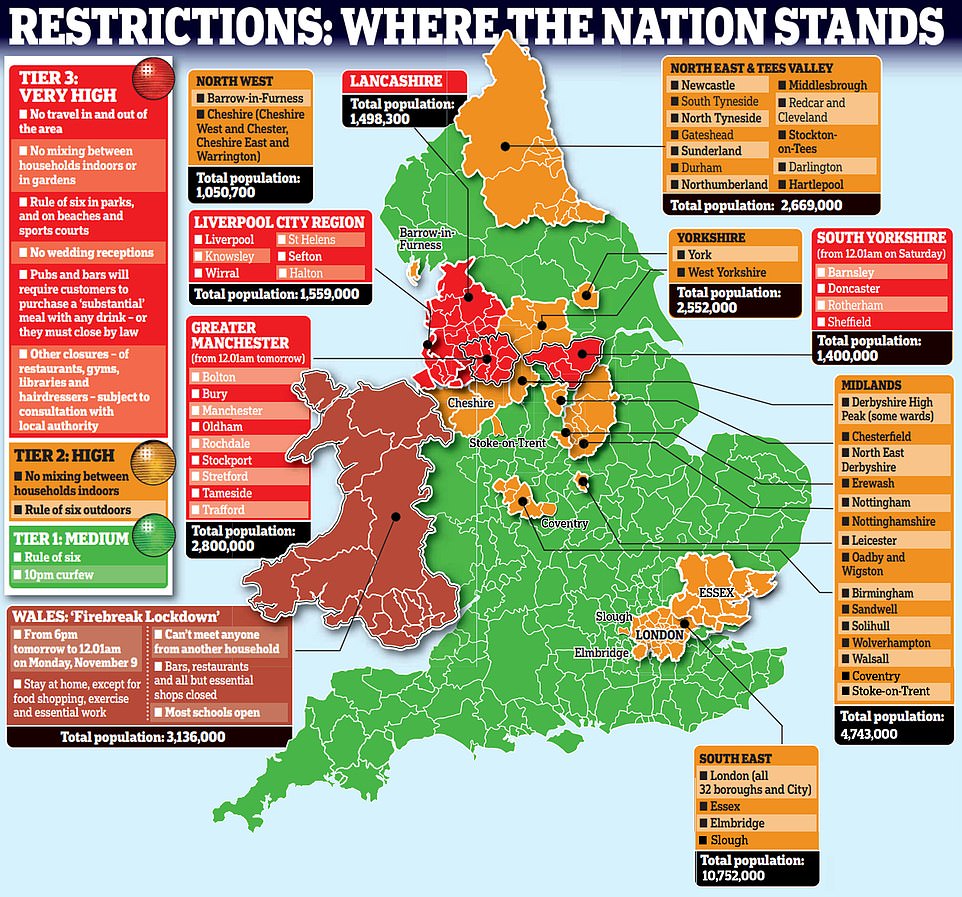 The Health Secretary told MPs yesterday that Warrington may be moved into the Tier 3 ‘very high’ alert level after announcing Stoke-on-Trent, Coventry and Slough are the latest areas to be put into Tier 2.

Matt Hancock told the House of Commons: ‘We are also formally beginning discussions with Warrington about moving into the ‘very high alert’ level due to the continuing rise of cases there.’

The council has now agreed a deal the Government to move into the highest lockdown tier of restrictions.

Tier 3 restrictions mean restaurants can open, but only until 10pm, and pubs and bars will be ordered to close unless they also operate as a restaurant. Betting shops and adult gaming centres will also be closed.

The new rules will mirror those in neighbouring authorities Liverpool and Manchester, which were plunged into Tier 3 lockdowns in the past two weeks.

The council said it has secured £5.9million in coronavirus support from the Government. Around £1.68million of this funding package will be allocated to supporting the council’s public health response – including for public protection, testing and enforcement services – with £4.2million to be used for business and employment support, the council said.

The deal was agreed during a call with government this morning, which involved council chief executive Steven Broomhead and Cllr Bowden, as well as Jenny Harries, the deputy chief medical officer for England, and Downing Street advisor Sir Ed Lister.

Council leader Russ Bowden said discussions with Government had been ‘honest and realistic’ and emphasised that if restrictions increased he would ‘do all I can to ensure there is an acceptable level of financial support made available for our businesses and their staff’.

He said: ‘We have got an issue in Warrington where the number of cases is stuck at a high level.

‘We have seen the propagation of those cases into the older population.

‘So the decision comes down to capacity in our hospital as well and we had to do what is right for Warrington.

‘It is a tough decision to make but we have got to that point where we need to move into tier 3.’

Today there are 102 Covid-19 positive inpatients at Warrington and Halton Hospitals NHS Trust, of which 13 are in intensive care. It runs two hospitals; Warrington Hospital whilst Halton General Hospital.

Andy Carter, Conservative MP for Warrington South, asked Mr Hancock yesterday to comment on the rapid rise in the over 60’s infection rate in Warrington.

Mr Hancock said: ‘I am worried about the rising cases especially amongst the over 60’s in Warrington. We’ve seen that case rate continue to rise despite the hard work of people locally since Warrington was moved into local alert level two.

‘There’s an excellent, excellent local hospital in Warrington but it is dealing with a very high number of cases and working actually with other local hospitals to ensure everyone gets the treatment they need.’

He added: ‘I do have concerns about the impact on local businesses and jobs if Warrington goes into Tier 3, and I’m particularly worried for our hospitality sector and those whose businesses are connected to the industry.’

It comes as talks over the city of Nottingham and other parts of the county entering Tier 3 restrictions are expected to continue today.

Gedling, Broxtowe and Rushcliffe are expected to go into Tier 3 despite currently being in Tier 1. Other areas such as Mansfield will be excluded, it is reported.

It was revealed that new rules could come into place by Wednesday, announced in Parliament on Monday.

Yesterday, a source familiar with the talks told Nottinghamshire Live that talks were ‘productive and successful’. They said council leaders and chief executives will meet again today at noon, before meeting with the minister again later on.

After the meeting, Nottingham City Council tweeted: ‘Update: Talks are ongoing between Council Leaders and Government about the current Covid-19 situation.

‘Leaders continue to stress the need to protect the health and wellbeing of the population as well as local businesses. Further updates will be provided as the talks progress.’

MPs in Broxtowe, Gedling and Rushcliffe attended a meeting with health minister Nadine Dorries this morning after they voiced concerns they were not being involved in the decision-making process, according to ITV.

Nottingham city has had one of the most consistently high infection rates – 610.1 cases per 100,000 people were diagnosed in the week to October 18, second only to Knowsley.

A whopping 2,031 cases were diagnosed in one week. It is understood to not have gone into higher alert already because its hospitals are not overwhelmed.

But this looks to be changing – Nottingham University Hospitals NHS Trust’s chief executive Tracy Taylor said the city’s Queen’s Medical Centre (QMC) has exceeded 200 patients with Covid-19 over the past few days and numbers were  ‘increasing by nearly another full ward of people’ every day.

The Chief Executive of Nottingham University Hospitals NHS Trust announced that the trust would be postponing non-urgent surgery until November 6 following a ‘dramatic increase’ of Covid patients in hospital.

In a statement, she said: ‘We have made the difficult decision to postpone some of our non-urgent surgery and appointments until November 6 following a dramatic increase in the number of patients with Covid-19 in our hospital.

‘Over the last few days we have exceeded 200 patients with the virus in the hospital, and every day this is increasing by nearly another full ward of people.

‘This surge is now at levels similar to April and is combining with our normal winter emergency pressures. Unfortunately this means that we’ve had to make this difficult decision to pause some of the treatment we offer.’

David Mellen, leader of Nottingham City Council, said local leaders were ‘keen to robustly discuss and understand any impact of Tier 3 given the approximate two-week time lag before we see any potential impact’.

He said cases had started to dwindle while in the current Tier 2 level; it’s infection rate went down sharply from 926.7 to 610.1 in one week.

‘As part of what we expect will be ongoing discussions starting today, we will be focused on negotiating a financial support package that will help protect the health of local people, save lives and also the livelihoods of local people and businesses in the city,’ Mr Mellen added.

It comes Mr Hancock announced Stoke-on-Trent, Coventry and Slough will move into a Tier 2 lockdown on Saturday, meaning another 745,000 people will be stung by tighter restrictions.

Nearly 40million people across Britain will be living under lockdowns, once these measures are fully enforced.

Abi Brown, Stoke-on-Trent’s city council leader, revealed she had written, with the support of the city’s three MPs, to the Health Secretary on Wednesday asking for the city to be moved up to Tier 2 restrictions.

She said the main reason for rising infections was community transmission and ‘people not being careful enough’ in homes, and smaller indoor spaces.

But she said: ‘Let me be clear, without decisive action, Tier 3 is where we are heading and that would mean bars and other facilities closing, as well as other very tough measures we do not want to see in the city.’

It came after it was revealed that the NHS Nightingale Hospital in Manchester will reopen in the next week as the city heads into Tier 3. A local NHS boss today announced the temporary hospital, set up in the Manchester Central Conference Centre, will be brought back into use before the end of next week. It will become the first one in England to reopen.

It had closed in June when the first wave of the UK’s outbreak burned out, but there are now fears that local hospitals will be inundated with Covid patients again. The Nightingale will not be used to treat people seriously ill with coronavirus but instead opened to add capacity for ‘additional rehabilitation’.

The city is entering Tier Three lockdown rules from midnight on Friday after a week of wrangling between the Government and the mayor, Andy Burnham, because the city has one of the highest infection rates in England.