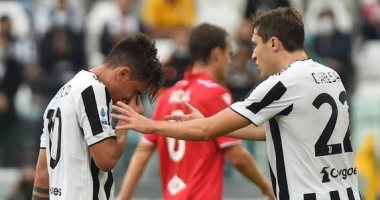 Argentine striker Paulo Dybala, Juventus striker, broke down in tears after being injured in the Sampdoria match and his exit from the meeting, which brings the two sides together this afternoon, at the Allianz Stadium.

Paulo Dybala suffered a severe injury while trying to cut the ball from the Sampdoria player, without the latter’s intervention, which led to his injury in the 21st minute of the match.

Paulo Dybala broke down in tears the moment he left the stadium for the Juventus match against Sampdoria, due to an injury that threatens to catch up with Chelsea in the Champions League, which is scheduled to be held next Wednesday.

Juventus beat Sampdoria with two goals in the first half of the match that brings them together today, Sunday, in the sixth round of the Italian Serie A competition, at the Allianz Stadium.

Juve dominated the events of the first half, and outperformed its rival Sampdoria in attack.

Argentine Paulo Dybala surprised Sampdoria, with a first goal in the 10th minute of the first half, to put Juventus in the lead.

The first half witnessed the injury of Argentine star Paulo Dybala, injured, in the 21st minute, and he left the field in tears.

Sampdoria reduced the difference with Juventus, with a surprise goal in the 44th minute of the first half.

Juventus started the Sampdoria match with a formation consisting of:

Juve had achieved their first victory in Calcio during the current season, at the expense of its host, Spezia, with a score of 3-2, in the meeting that brought the two teams together last Wednesday night.

Juventus occupies the twelfth place in the Italian league table with 5 points, before facing Sampdoria, who is thirteenth with the same number of points, and leads Napoli with 15 points.