Wayne Gretzky set another hockey record this week, as his 1979 rookie card was sold at auction for $1.3 million.

This marks the first time a hockey card has sold for seven figures. Heritage Auctions handled the sale of the card, which was printed by O-Pee-Chee (OPC), the Canadian card company that went defunct in 1996.

The buyer was not identified publicly.

‘Having recently passed its fortieth birthday, the Wayne Gretzky rookie finds itself balanced between the venerable old and spanking new, though we’re still inclined to carve its likeness into the Mount Rushmore of the modern era,’ read the description on the Heritage Auctions website.

‘Its status as the most recognizable hockey card in the hobby is uncontested, though it could hardly be characterized as ubiquitous, particularly in the listed format produced in Gretzky’s native Canada.’ 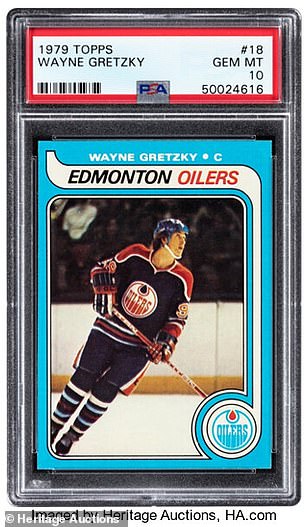 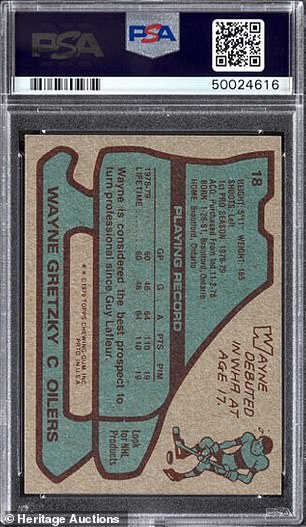 This marks the first time a hockey card has sold for seven figures. Heritage Auctions handled the sale of the card, which was made by O-Pee-Chee, a now-defunct Canadian card company 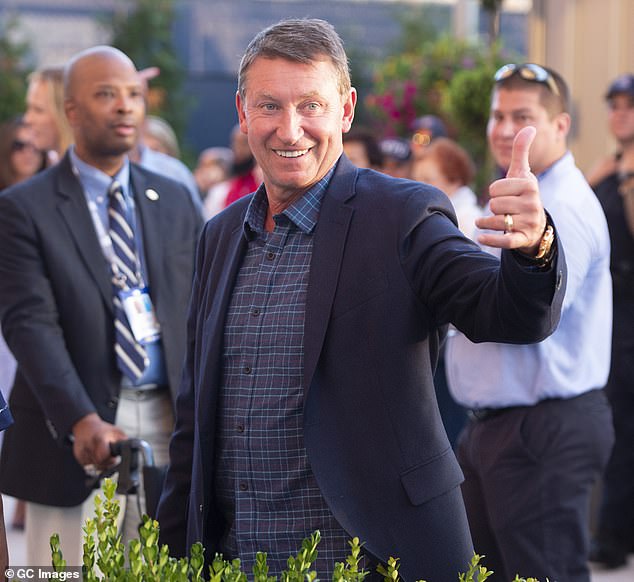 Wayne Gretzky, the NHL’s all-time top scorer, pictured at the US Open on September 4, 2019

Due to scarcity, Gretzky cards could ultimately overtake those of his NBA counterpart, Michael Jordan, as the sports memorabilia market continues to soar.

‘Jordan rookies outnumber the Gretzky by a factor of three-to-one in the full population, and the divide explodes to cavernous dimensions at the top of the grading spectrum,’ read the Heritage Auctions description.

‘At the time this text is written, the PSA website indicates a population of 316 Gem Mint 10 examples of the Fleer Jordan rookie, while the offered Gretzky card is one of only two to achieve that top-tier assessment.’

One reason for the Gretzky card’s high value is that it didn’t suffer the same issues with the cutting process that many OPC cards have.

‘The Canadians used wire rather than blades to segregate individual cards from their printed sheets, creating a problem that was progressively compounded as the wire dulled from use,’ read the Heritage Auction description. 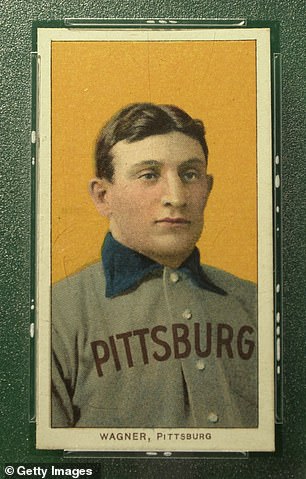 For a period of time in the 1990s, Gretzky owned the notorious T206 Honus Wagner baseball card, which was later sold at auction in 2007 fo a record $2.8 million

‘Eventually, the cards would suffer cuts as jagged as those on [former Detroit Red Wings goaltender] Terry Sawchuk’s face.’

Gretzky was not the seller, who wasn’t identified, but he is familiar with trading cards.

For a period of time in the 1990s, he owned the famed T206 Honus Wagner baseball card, which was later sold at auction in 2007 fo a record $2.8 million. The card now belongs to Arizona Diamondbacks owner Ken Kendrick.

Another version of the card sold at auction in 2016 for $3.1 million, which would have been a record, were it not for the soaring trading card market in 2020.

Since May, the sales record for modern cards has been broken by a Mike Trout rookie ($900,000) and a LeBron James rookie ($1.8 million). Then in August, another autographed Trout rookie sold for $3.9 million, eclipsing the record for all cards.

‘The market’s just on fire,’ Jesse Craig, the director of business development for trading card website and auction house PWCC, told DailyMail.com in October. ‘We’re very fortunate to be in the business that we’re in right now during a pandemic and still be thriving.’ 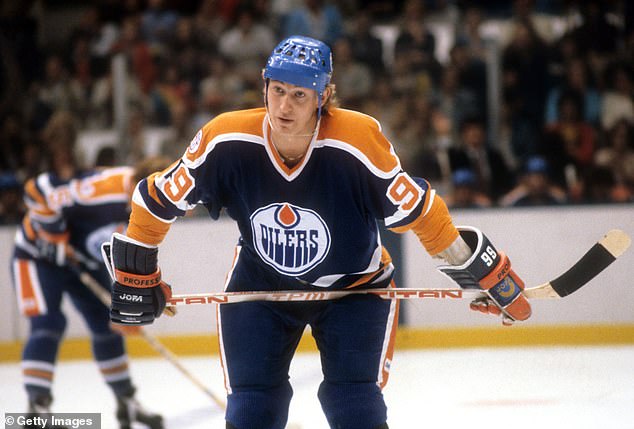 Covid and Christmas are to blame for this chaos - NOT Brexit, writes ROSS CLARK

US buys ANOTHER 100 million doses of Moderna's COVID-19 vaccine

MINNEAPOLIS (WCCO) — The Minnesota OSHA is investigating after a employee was killed within the lumberyard...