WBBL: What can The Hundred learn from Australia’s Big Bash? 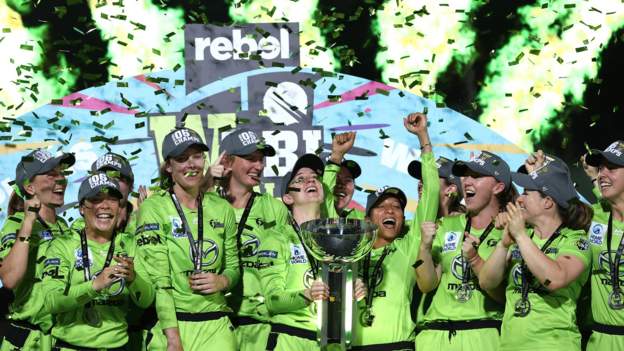 
The sixth edition of the Women’s Big Bash League was the best yet for skill and spectacle from non-international players.

It is a sign of how the sport is maturing in Australia. The final itself didn’t possess the quality and excitement witnessed at earlier stages of the competition, including two pulsating semi-finals, but the talent on show throughout the tournament – including from a clutch of fearless teenagers – made for compelling viewing peppered with awe-inspiring moments.

The good news for fans in the UK is that the England and Wales Cricket Board’s own version, The Hundred, launches next season, with the biggest names in the game expected to take part.

There aren’t any tournaments in the world that rival the WBBL for profile, depth of talent and exposure.

The ECB’s now-defunct Kia Super League was the most well established outside of the Big Bash but never enjoyed the same promotion and free-to-air television coverage that has seen the WBBL entrenched as a staple of the Australian summer.

Last year, in its fifth season, the Big Bash moved to its own standalone slot, devoid of clash or compromise with the men’s competition.

TV ratings suggest the audience has approved, with an average audience of 428,801 for the final – 12% up on last year. Media coverage was even more important this year given the pandemic condensed the tournament into just two venues with limited spectators.

The Big Bash is underpinned by four years of professional domestic contracts, the likes of which have only just been established in the UK through new regional teams.

As a result, while blistering batting has long been a feature of women’s T20 cricket (and if you didn’t see Alyssa Healy’s 48-ball hundred in this year’s semi-final, look it up), it seems this season that more bowlers – and more young bowlers – have been bowling quicker and with a greater command of their skills than ever before.

Who are these talented teenagers?

Sydney Thunder’s Hannah Darlington was Young Player of the Year last season, aged 17. At 18, she followed it up with 19 wickets at 13.68 this year, including 3-19 in the semi-final, executing perfect yorkers under pressure at the death.

Only experienced team mate Sammy-Jo Johnson took more wickets in the tournament. Darlington bowls with no fear, and no small amount of skill, citing having the chance to do a first full pre-season with state side New South Wales as key to improving her fitness and bowling speed, and developing variations in pace.

This year’s Young Gun award went to Adelaide Strikers fast bowler Darcie Brown, who is already bowling at 116km/h (72mph) at the age of 17. The fastest bowlers in the world in the women’s game currently hit the low- to mid-120s.

The strokeplay and shot placement of Darlington’s Thunder team-mate Phoebe Litchfield showed a maturity beyond her 17 years. She’s a gun fielder too. The victorious Thunder squad featured eight players aged 20 or younger.

Who else shone this year?

During the semi-final, England’s Nat Sciver was described by her Melbourne Stars coach Trent Woodhill as the best all-rounder in the world.

Her 19 tournament wickets, and 252 runs at an average of 36 and strike-rate of 122.93, played a huge part in Stars’ dominance of the competition up to the final.

Where can I see the stars in The Hundred?

Keep up to speed with all the signings here, but an eye-catching partnership is Knight teaming up again with victorious Thunder coach Trevor Griffin at London Spirit. The pair won two KSL titles together with Western Storm.

Six-hitting supremo Devine is locked in with Birmingham Phoenix, while Sciver and England team-mate and fast bowler Katherine Brunt are confirmed at Trent Rockets.

If those who signed in 2020 carry forward their contracts, Northern Superchargers will be treated to the world’s most exciting wicketkeeper-batter Healy, while T20 World Cup-winning captain Lanning will be setting Sophia Gardens alight with Welsh Fire.

Can The Hundred live up to the Big Bash?

The Hundred is a whole new format, so players will have to get to grips with new rules and new tactics.

The big difference between the two competitions will be the strength of the domestic players, with the professional set-up being well established in Australia.

There is already a strong following among youngsters and families developed through England women and the KSL.

The broadcast schedule is not fully known yet, but visibility on television (including the BBC) and social media will be key to building the names and personalities of the lesser-known players.

I believe The Hundred, coupled with the new professional regional set-up, will see an acceleration in skills and fitness faster than this country has seen before.

Barbour’s Christmas campaign is a heart-warming tale on sustainability

Barbour's Christmas campaign is a heart-warming tale on sustainability