‘We played well with fantastic spirit’: Carlo Ancelotti praises his Everton side’s display after they secured hard-fought victory over Chelsea

Carlo Ancelotti has heaped praise on on his Everton side following their hard-fought victory over Chelsea.

Chelsea’s 17-match unbeaten run was ended by an Edouard Mendy error at Goodison Park as a patched-up Everton side won 1-0 to deny their visitors the chance of going top of the table.

‘Really pleased,’ Ancelotti said following the game. ‘In front of our supporters, we are really happy for them. We played well with fantastic spirit. 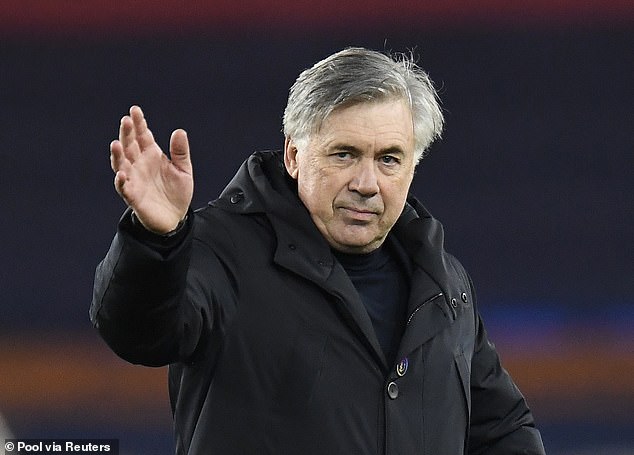 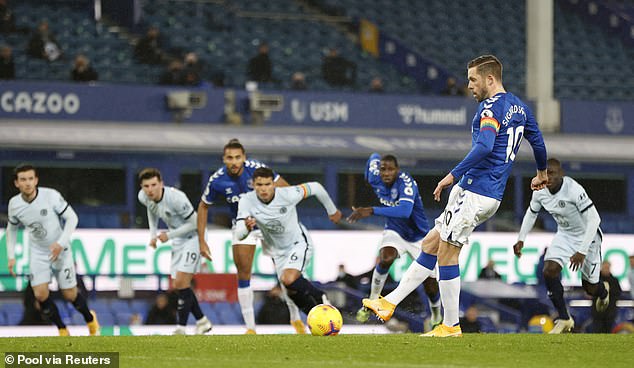 ‘The fans were really strong, we were really pleased. It is really important to have the support. It’s a totally different environment.

‘Defensively we did really well. Allan, Doucoure, Sigurdsson and Iwobi worked really hard. The team sacrificed. Our counter-attacks we were dangerous, we didn’t concede a lot of opportunities.

Mendy’s rush of blood came after he saw the Toffees striker get the better of the experienced Thiago Silva in the air, but when Calvert-Lewin poked the ball past him there was nowhere to go but clatter into the England international.

It was the ideal scenario for Carlo Ancelotti’s team, who due to injuries lined up with a quartet of centre-halves across the back four and without their influential playmaker James Rodriguez, subsequently defended resolutely and counter-attacked sporadically to secure a welcome three points after one victory in their previous six outings. 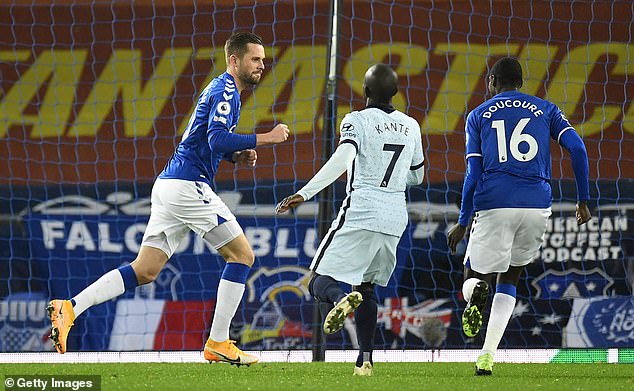 That tactic almost helped them double their lead but a second penalty, awarded after the excellent Calvert-Lewin was tugged back by Ben Chilwell, was chalked off for offside.

Chelsea, who went into the weekend the Premier League’s second-highest scorers behind Liverpool, managed just 10 shots and hit a post through Reece James and Mason Mount as Frank Lampard’s 50th Premier League match in charge ended in defeat – their first since losing to Liverpool on September 20.

Centre-forward Olivier Giroud, who was attempting to become only the second Chelsea player to score in seven successive Premier League starts, barely had a chance.

All the focus had been on Everton’s makeshift full-backs but Mason Holgate, on the right, did an impressive job of keeping Timo Werner quiet, although Ben Godfrey found a marauding James a different prospect.

The plus side of having four central defenders was they were not inclined to go too far over the halfway line and once Everton got in front they stuck to their task of stopping Chelsea’s attackers and it worked with a first clean sheet since the opening game of the season.

Chelsea’s control of early possession barely benefited them and they went behind midway through the first half thanks to some route one football and classic centre-forward play.

Calvert-Lewin outjumped Silva from goalkeeper Jordan Pickford’s long pass and then poked the ball past Mendy as he charged out, with the goalkeeper’s momentum taking out the Everton striker.

Richarlison, without a Premier League goal since September, wanted the penalty but compatriot Allan and Abdoulaye Doucoure persuaded him to relinquish the ball and Sigurdsson coolly sent Mendy the wrong way.

It did little for the Brazil international’s confidence and, having earlier shot weakly at Mendy when well-placed, he made it too easy for the goalkeeper to save with his legs when Silva gave away possession and Alex Iwobi and Sigurdsson sprang the counter. 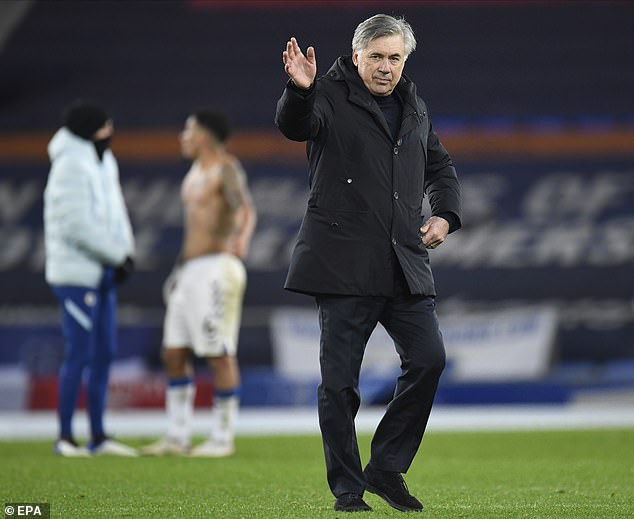 In between the goal and that last chance of the half, Pickford’s good form from last week’s draw at Burnley continued as he twice saved well from James, tipping one shot onto a post at full stretch.

When Pickford came to the edge of his area to punch early in the second half, Mount dropped a lob onto the roof of the net, with the same player later beating Pickford but not the woodwork with a free-kick.

Everton’s chances were infrequent, with Yerry Mina taking a cross right off the head of Calvert-Lewin and Richarlison’s first decent shot forcing a good, low save from Mendy before Sigurdsson – only in the side because of Rodriguez’s calf injury – was denied the chance to double his penalty tally by VAR.

Tammy Abraham replaced the ineffectual Kai Havertz for the last 22 minutes but it had little effect on the outcome as the first 2,000 fans inside Goodison since March celebrated a welcome victory.

Israel records 1,288 cases of the new Corona virus within 24 hours

The Washington Post: Biden faces the risk of being installed without any proven ministers by Congress

Team USA superstar gymnast Simone Biles has thanked her fans for their 'love and support' after...