The Volkswagen Up! is the car has the lowest first year car insurance costs, costing drivers £1,483 on average, new research has revealed.

Motorists will have to shell out just £20 in road tax per year, for pre-2017 vehicles, and pay an average monthly lease of £67, according to data from Local Driving School.

It found the second cheapest model to insure is a Citroen C1, costing an average of £1,623 per year.

At the other end of the scale, a BMW 1 Series was found to be the most expensive to insure at £3,552 per year on average. 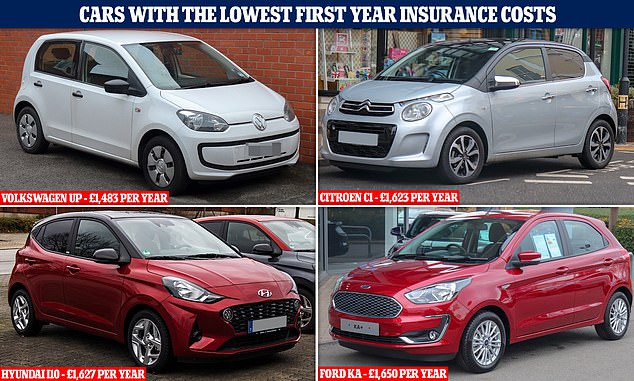 The Volkswagen Up! is the car has the lowest first year car insurance costs, costing £1,483 on average, according to quote data collated by a comparison website

The average insurance costs are based on insurance quotes for first-time drivers within a year of passing their driving test.

All results have been pulled from the lowest quotes given by a popular insurance comparison site.

It found the Hyundai i10 and the Ford Ka were also two of the cheapest models to insure costing just £1,627 and £1,650 per year, respectively.

However, while the Volkswagen Polo regularly ranks at the top of many hatchback roundups, the insurance costs are the second most expensive.

Drivers could be looking at paying £3,077 for the first year of driving in this popular car.

Meanwhile, the UK’s most popular car, the Ford Fiesta, sits at an average of £2,354 to insure for a driver’s first year on the road.

However, if you opt for a pre-2017 EcoBoost model, £0 road tax and high fuel efficiency reduce this car’s costs.

Claire Davies, marketing manager at Local Driving School, said: ‘Car insurance is all about risk – with the popularity of the VW Polo, insurers also see lots of accidents and claims for this model, which result in higher insurance costs.

‘Certain trim levels and specifications can also change the insurance group of a car dramatically.

‘To avoid any costly surprises, check insurance quotes on the exact model you’re looking at before buying, and compare this to similar models with different specifications. The smallest details can massively change the quoted price from these averages.

‘We also recommend checking the safety ratings of the cars you’re comparing – a high safety rating should be an important consideration in any purchase.’

Pricey: The BMW Series 1 was named the car with the highest insurance costs for the first year

The average annual car insurance premium has dipped slightly to £602 in March 2021, separate research from Compare the Market shows.

This is a marginal decline of just £1.14 from the previous month suggesting the end of the big price falls.

However, the average premium is still £110 cheaper than the same month last year.

Some areas such as East Anglia, the West Midlands and Northern Ireland have already seen minor increases in premium costs month on month.

However, motorists will be glad that premiums are still at a six-year low, having plunged by more than £100 from March 2020.

Dan Hutson, head of motor insurance at Compare the Market, said: ‘The rapid fall in car insurance premiums, seen during the winter, appears to have come to a halt at the start of spring.

‘This could mean that premiums will start to rise through the next few months, with more cars on the road as businesses reopen and the economy gets back into gear, although big savings can still be made by shopping around.’

‘Drivers should remember to shop around when their policy comes to an end to ensure they get the best possible deal.

‘Now that lockdown is being lifted, households thinking about buying a new or used car might want to consider their insurance options.

‘Insurers can change an existing policy but may charge an administration fee, or drivers can pay a cancellation fee and shop around for a new policy while premiums are still low – but bear in mind this can impact the no claims discounts for the year.’