‘We will fight!’ Reps. Gaetz and Greene protest in California after third venue canceled their rally


Matt Gaetz and Marjorie Taylor Greene held an impromptu protest in Southern California on Saturday after a third venue canceled their ‘America First’ rally just hours before they were set to take stage.

As an alternative to the rally, the duo convened a ‘Free Speech Peaceful Protest’ with about 100 supporters outside the Riverside City Hall.

Gaetz, who represents Florida‘s 1st congressional district, warned conservatives are getting ready to fight in the streets for their First Amendment rights.

Later Saturday night, Greene posted a video of her and Gaetz walking barefoot on the beach where they were also surrounded by an entourage of supporters holding signs, cheering and yelling ‘Freedom’ and ‘We love you!’

‘[Matt Gaetz] and I are proud to fight for America in the halls of Congress,’ Greene tweeted just after 11 p.m. pacific time on Saturday. ‘Thank you, Southern California for showing up even though the communists tried to cancel us!!’

The protest in Riverside, a city about 55 miles east of Los Angeles, came after a third California venue canceled Greene and Gaetz’s rally. 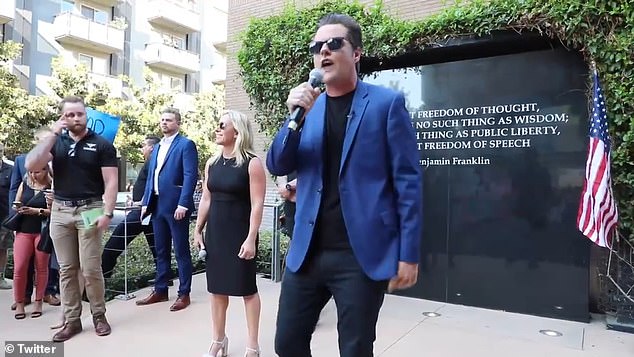 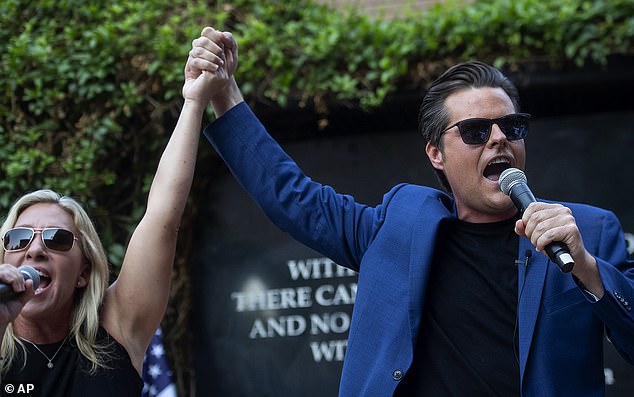 ‘They may try to cancel us online, they may try to pursue us in real life, they may try to shut down our venues, but we will take this fight to them in the courts, in the halls of Congress and, if necessary, in the streets,’ Gaetz yelled to a crowd of about 100 supporters

The city of Anaheim announced Saturday morning that the venue, Pacific Hills Banquet & Event Center, had to cancel the events only 10 hours before it’s start time.

The cancelation, the city said, was due to concerns over safety, especially amid rising cases of the Delta COVID-19 variant, but more importantly it was nixed due to the ‘divisiveness’ of the two far-right lawmakers.

The venue’s general manager Javad Mirtavoosi told the Orange County Register on Friday that when the event was first booked the center just expected it to be a ‘gathering.’

‘As soon as we found out who the speakers were we immediately canceled it,’ Mirtavoosi said.

‘We just thought it would be best for our facility to cancel,’ he added. ‘We just want to stay clear of that.’

Greene has been bashed for backing Q-Anon conspiracy theories before and during her time in Congress and was stripped of her committee assignments in February after endorsing these theories. Gaetz is embattled himself as he faces an investigation into whether he sexually trafficked a minor by allegedly paying a 17-year-old for sex.

The two lawmakers from Florida and Georgia are also staunch supporters and allies of former President Donald Trump. They frequently tout his claims the 2020 presidential election was stolen and rigged due to widespread voter fraud made possible by the circumstances surrounding the election in the midst of the pandemic – including expanded mail-in voting. 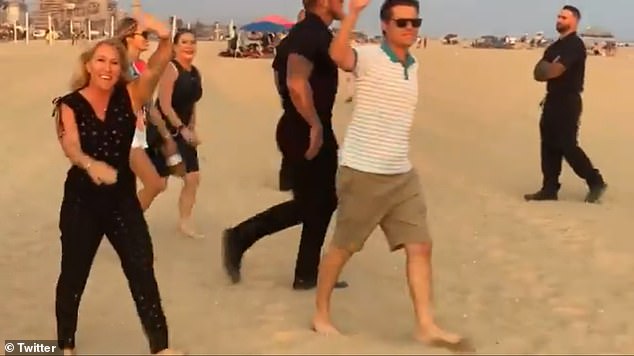 Greene, of Georgia, also posted a video of her and Gaetz, of Florida, walking barefoot on a Southern California beach on Saturday evening 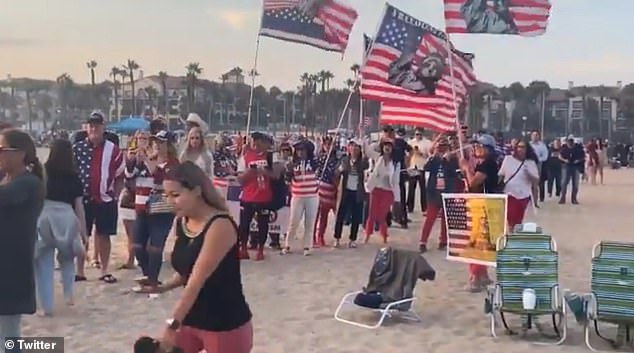 Supporters gathered on the beach as Greene and Gaetz walked on the sand, they were holding signs and yelling ‘Freedom!’ and ‘We love you!’ to the lawmakers

After the third venue canceled the rally, which is part of Gaetz and Greene’s cross-country ‘America First’ tour, the two blamed cancel culture and attempts to suppress conserative voices.

‘They may try to cancel us online, they may try to pursue us in real life, they may try to shut down our venues, but we will take this fight to them in the courts, in the halls of Congress and, if necessary, in the streets,’ Gaetz screamed into a microphone during the demonstration outside Riverside City Hall.

He also likened leftist progressive thought in America to the violent clashes between protestors in Cuba with their socialist unitarian government.

‘I know many of us are concerned about what is happening in Cuba, but I am far more concerned that the United States is becoming Cuba,’ Gaetz said as Greene stood by his side.

‘Do you know why they’re so afraid of Matt Gaetz and Marjorie Taylor Greene?’ he questioned the crowd. ‘Because we fight for you, not them.’

Green assured during the protest: ‘We won’t back down.’

‘And here’s what we’re going to do, America,’ the Georgia congresswoman continued. ‘You’ve got two members of Congress right here, and we refuse to be canceled because we won’t let you be canceled.’

In new media appearances, Sam Bankman-Fried brazenly mused about his culpability in FTX's crash. He denied hoping to defraud stakeholders, but conceded the lax oversight of FTX's pitfalls. ...

The Princess of Wales put on a stylish show for US royal fans today as she stepped out for her first solo engagement of her and William's whirlwind...