The eyes of the public and followers are always related to celebrities around the world, to quote their style, in choosing their outfits, which are characterized by extreme elegance and attractiveness as well, and in recent years, fashion makers have relied on reviving a number of trends of the eighties and nineties, including the leopard or tiger print, as you know among the public. 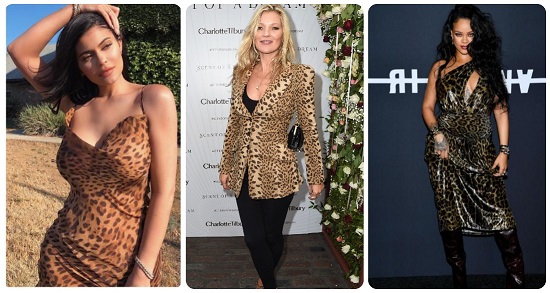 In fact, the tiger or leopard print is one of the favorite prints of Hollywood and Bollywood celebrities as well. A number of world stars such as Kim Kardashian, Rihanna, and Kylie Jenner wore it, but each of them wore it in a different style than the other, which increased the space of inspiration for followers.

In this report, we monitor a number of celebrity looks in the leopard or tiger print, to be a source of inspiration for many around the world, according to a report published on the website people.

Rihanna in a special tiger dress

Rihanna is no stranger to bold outfits. The singer and businesswoman wowed everyone in a leopard print dress from Saint Laurent. The one-shoulder dress featured a signature plunging neckline. She paired it with leather boots, and completed her look with messy curls and brown lipstick.

The Kardashian family has a great love for clothes printed with animal prints, which appeared strongly on social media, as Kylie Jenner wore a maxi dress with a leopard print, with a low neckline, and distinctive bronze makeup, under the sun.

Kendall Jenner also wore a head-to-toe leopard print that looked so chic, the key was to wear prints in similar shades.

Model Kate Moss re-introduced the leopard print in a distinctive look, when she wore an elegant leopard-print jacket, with skinny black pants.

Nora Fatehi in a tiger dress from Roberto Cavalli

Bollywood star Nora is the queen of printed dresses from suits to bikinis, and she thrilled her followers with the leopard dress from designer Roberto Cavalli.

Jacqueline Fernandez in a chic blazer

Jacqueline also wore a leopard print but as a jacket, with black pants and black shoes, tightly tied hair, and soft makeup.

Watch... the moment Dybala cried after being injured in the Juventus match against Sampdoria