At least it wasn’t the groom! Mortifying moment wedding photographer calls the bride by her new husband’s EX’S name TWICE – leaving him cringing in horror

A wedding photographer made the ultimate faux pas when she called a bride by her groom’s ex’s name not once, but twice.

Katelyn and Corey Love’s videographer, John Pattyson Videography, captured the awkward moment at the Michigan couple’s wedding on May 31 and posted the footage on TikTok, Insider reported. 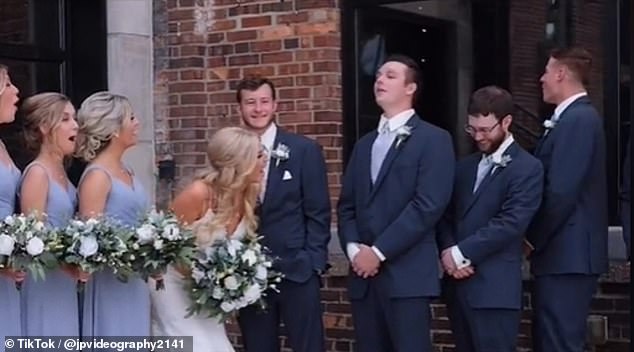 Horrifying: A viral video has captured the mortifying moment a wedding photographer called the bride by her groom’s ex’s name 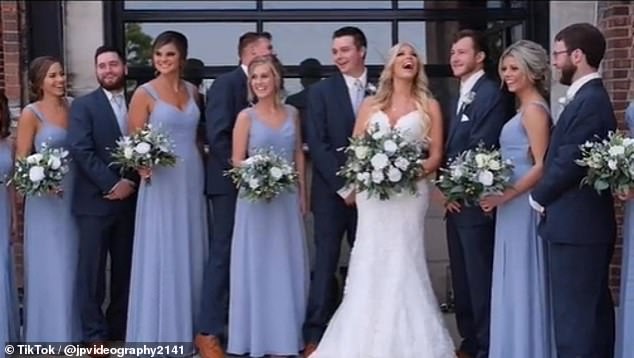 Second time not so lucky! Video taken at Katelyn and Corey Love’s May 31 wedding showed the photographer making the mistake twice in a row – leaving the groom horrified

The video shows the newlyweds posing with their wedding party when the photographer says, ‘Corey and Taylor look at each other.’

Katelyn freezes for a second and then gives Corey a tense look with a smile plastered on her face as the TikTok ‘Oh No’ song plays in the background.

The photographer realizes her mistake and says, ‘Sorry, Katylen,’ which elicits shocked laughter and hoots from their bridesmaids and groomsmen.

‘That’s his ex,’ Katelyn explains, laughing it off.

‘Are you serious?’ the photographer asks.

Oh no: In the clip, newlywed Corey is seen cringing in horror when the photographer called his bride ‘Taylor’ instead of Katelyn 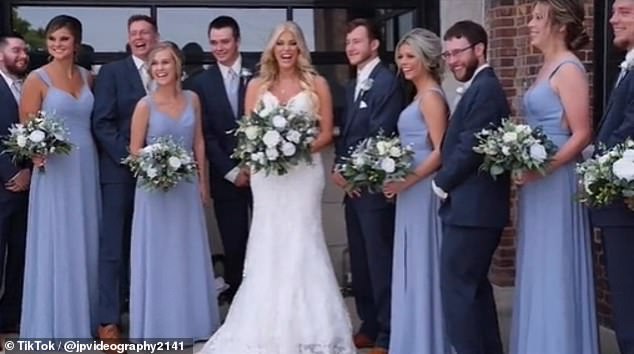 Making light: Luckily the bride laughed off the error on both occasions, although the bridal party quickly suggested that the photographer refer to them simply as ‘the couple’

The video then skips to the moment when the photographer calls Katelyn the wrong name for a second time during the session, saying: ‘Corey and Taylor look at each other.’

The wedding party doesn’t hold back their reactions this time, with one groomsman, saying, ‘Oh my God!’ in response to the snafu.

‘Katelyn!’ yells the frustrated bride, while another groomsman jokes: ‘Just say the couple’ —  a comedic effort to get the photographer to stop calling her Taylor.

The video has been viewed more than 3.7 million times since it was posted last week and has received thousands of responses from amused TikTokers.

The videographer explained in the comments that a bride the photographer had worked with the week before was named Taylor, hence the confusion.

Viral: TikTok users were horrified by the mistake, with some joking that the photographer must have been friends with Corey’s ex

However, many admitted that they would be furious, with some claiming it would have ruined their wedding day.

‘Oh nah if this happened to me I would’ve been sooo mad the whole wedding,’ one person wrote, while another added: ‘She did not understand the assignment.’

‘This is giving me Ross, Rachel, and Emily vibes,’ someone else shared, referring to the Friends episode in which Ross called Emily ‘Rachel’ at the altar.

Other viewers joked that the photographer knows Taylor and called Katelyn the wrong name on purpose.

‘Plot twist: the photographer’s the friend of the groom’s ex,’ one TikToker deduced.

‘The second time was definitely on purpose,’ someone else shared.

And another commented: ‘She’s probably friends with Taylor.’

IGN Fan Fest: Everything Announced and Revealed So Far

Are YOU a perfectionist? Satisfying snaps present the acute lengths individuals go to with their organising...