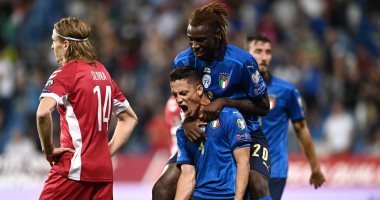 Yesterday, Wednesday, a large number of matches were held in various stadiums of the world, most notably the qualifiers for the 2022 World Cup Qatar, which were marked by scoring a number of distinguished goals.

The Polish team snatched a 1-1 draw against its guest England, in the match that brought the two teams together, on Wednesday evening, at the “Slaskie International Stadium”, as part of the sixth round of Group I in the European qualifiers for the 2022 World Cup..

Harry Kane scored the England national team’s goal in the 72nd minute with a superb shot from outside the penalty area, which landed to the left of Juventus goalkeeper Chesney.

Kane raised his score to 41 international goals with the England national team, to be ranked fifth in the historical top scorer, with a goal difference from Michael Owen.

In the second minute of stoppage time, Damien Szymanski scored the equalizer for Poland with an assist from Robert Lewandowski.

The German national team won a big victory over its Icelandic counterpart, 4-0, in the meeting that brought the two teams together, on Wednesday evening, at the “Lawardesvolor Stadium” in Iceland, as part of the sixth round of the tenth group in the European qualifiers for the 2022 World Cup in Qatar.

Italy defeated Lithuania 5-0 in the match between the two teams on Wednesday evening at the Mapei Stadium, as part of the sixth round of Group C of the European qualifiers for the 2022 World Cup in Qatar.

Spain won a difficult victory over its host Kosovo, with a clean double, in the meeting that brought them together on Wednesday evening, at the “Vadil Vokri Stadium”, in the sixth round of Group B of the European qualifiers for the 2022 World Cup in Qatar.

The Spanish team ended the first half of the match with a clean goal, scored by Pablo Fornals of West Ham, in the 32nd minute of the match.

In the second half, Manchester City’s Ferran Torres scored the second goal of the La Roja team in the 88th minute of the match.

Belgium won a valuable victory over its host Belarus, with a goal free of charge, in the match that was held at the “Dynamo Stadium”, as part of the sixth round of Group E of the European qualifiers for the 2022 World Cup..

Denis Praet of Leicester City scored the winning goal for Belgium in the 33rd minute with a powerful shot from inside the penalty area.