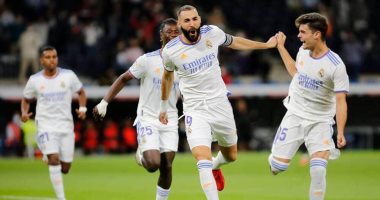 Yesterday, Wednesday, a large number of matches were held in various stadiums of the world, most notably the confrontations of the five major European leagues, in addition to the English League Cup matches, which were marked by scoring a large number of wonderful goals.

Real Madrid beat Mallorca 6-1 in the match that brought the two teams together at the “Santiago Bernabeu” stadium, as part of the sixth round of the Spanish League championship for the current season 2021/22.

The goals of the Italian League matches Spezia 2-3 Juventus Juventus snatched their first victory in the Italian League during the current season 2021-2022, after beating its host Spezia team 3-2, in the exciting match that brought the two teams together on Wednesday evening, at the “Alberto Bico” stadium, Within the competitions of the fifth round of Calcio. The positive tie was settled with a score of 1-1 in the first half of the match, and Juventus was the first to score through young striker Moise Kean, in the 28th minute, with a shot to the right of the Spezia goalkeeper. Ghanaian Emmanuel Gyasi scored the equalizer for the home team in the 33rd minute, with a wonderful shot that landed to the left of the Juve goalkeeper Chesney. And the “Opta” network, which specializes in monitoring statistics, stated that Juventus scored goals in 19 consecutive matches in Calcio, for the first time since 1955, when it was received and at the beginning of the second half, Spezia succeeded in adding the second goal in the 49th minute, through the player Yannis Antisti. , From a shot lived to the right of the goalkeeper Juve. Federico Chiesa scored the equalizer for the old lady’s team in the 66th minute, and Dutch defender Matthias de Ligt added the third goal for Juventus in the 72nd minute.

Milan 2 – 0 Venezia Milan won a valuable victory over its guest, the newly promoted Venezia, with a clean double, in the meeting that brought the two teams together on Wednesday evening, at the “San Siro” stadium, in the fifth round of the Italian League. The Spaniard Brahim Diaz opened Milan’s goals in the 68th minute of the match, after following the cross of his French colleague Theo Hernandez. Theo Hernandez added the second goal of the Rossoneri in the 82nd minute of the match, with a powerful shot to the left of the Venezia goalkeeper.

The goals of the English League Cup matches Manchester United 0-1 West Ham The West Ham United team achieved a great surprise and ousted the giant Manchester United from the 32nd round of the League Cup, after winning it 1-0, in the confrontation that brought the two teams together on Wednesday evening at the stadium. Old Trafford”, in the 32nd round of the tournament. West Ham’s only goal came in the 9th minute through Manuel Lanzini.

Chelsea 1 – 1 Aston Villa “4-3 on penalties” Chelsea qualified for the round of 16 of the English League Cup, at the expense of Aston Villa on penalties 4-3, after the end of the original time of the match with a 1-1 draw, in the meeting that brought them together in the evening Wednesday, at Stamford Bridge, in the third round. Chelsea took the lead in the 54th minute of the match, with a header from German striker Timo Werner, which landed to the right of the Aston Villa goalkeeper. The Villains managed to equalize in the 64th minute of the match, through Cameron Archer, so the two teams resorted to penalty kicks. The Blues won the penalty shootout 4-3, after Ben Chilwell wasted by Chelsea, on the other hand, Aston Villa missed Ashley Young and Nakamba.

Arsenal 3-0 Wimbledon The Arsenal team beat Wimbledon 3-0, one of the second-tier clubs, during the match that brought them together on Wednesday evening at the Emirates Stadium, as part of the third round of the League Cup for the current season 2021-2022. Arsenal’s goals were scored by Lacazette, Emile Smith-Roy, and Edward Nikita in the 11th, 77th and 80th minutes, respectively. Mohamed Elneny was on the bench in his first appearance after the injury he sustained during one of Arsenal’s friendly matches during the last international calendar.

Wolverhampton 2 – 2 Tottenham “3-2 on penalties” Tottenham qualified for the round of 16 of the English League Cup, after they overcame its host Wolverhampton on penalties 3-2, after the end of the match in a positive 2-2 draw, which brought the two teams together at the stadium. Molyneux”. Tottenham ended the first half of the match with a 2-1 lead. Tangi Ndombele and Harry Kane scored twice in the 14th and 23rd minutes, and Wolverhampton Leander Dendoncker scored the goal in the 38th minute. In the second half, Wolverhampton scored the equalizer in the minute Daniel Bodensee in the 58th minute. The match went to a penalty shootout, which Tottenham won 3-2.

The goals of the French league matches, Metz 1 – 2 Paris Saint-Germain, Ashraf Hakimi, the star of Paris Saint-Germain, led his team to achieve a fatal victory at the expense of Metz, after beating Metz 2-1 in the match that took place between them on Wednesday evening at the “Saint-Symphorian” stadium, as part of the seventh round of matches. French League Championship. Paris Saint-Germain’s goal came in the fifth minute of the match, at an early goal-scoring start in the meeting, which contributed to a state of relief among the Parisian players. Boubacar Kiki Koyati equalized the score in favor of Metz in the 39th minute of the first half and the match before Achraf Hakimi scored the winning goal in the fifth minute of stoppage time with a magical pass he received from the Brazilian Neymar da Silva.