Clover Health shares soared 86 percent Tuesday, wiping out five months of losses in just two days as the healthcare company found itself swept up in the latest round of ‘meme stock’ mania.

The Medicare-backed insurance seller closed the trading day at $22.15, almost triple its price of $7.64 at the end of May, as a record 718 million shares in the firm changed hands.

At its peak, shares were up a staggering 109 percent, driven by small retail traders on the Reddit discussion board WallStreetBets who spied at as the next short squeeze.

The forum also pushed shares in Wendy’s fast food joint up 26 percent Tuesday, at $28.87, after individual traders snapped up shares in a buying frenzy.

The two companies are the latest ‘meme stocks’ to capture the imagination of amateur investors following the recent rallies in GameStop and AMC. 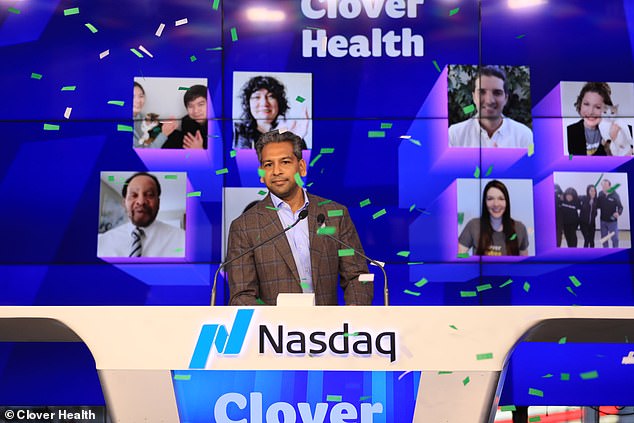 Clover Health shares soared 86 percent Tuesday, wiping out five months of losses in just two days as the healthcare company found itself swept up in the latest round of ‘meme stock’ mania. Cofounder and CEO Vivek Garipalli above

Clover’s record share price came on a second day of huge gains for the company which is backed by serial dealmaker Chamath Palihapitiya.

On Monday, the stock jumped 32 percent and the company now has a market value of $9 billion.

The company had posted losses for the last three months, which led eagle-eyed Reddit users to see an opportunity to punish short-sellers betting against the company and create a short squeeze.

Short interest in Clover Health is at 49.10 million shares, or 43.5 percent of the float, Ihor Dusaniwsky, managing director of predictive analytics at S3 said on Tuesday.

Short sellers were down $465 million in mark-to-market losses on Tuesday, based on a more than 80 percent price gain, which raised year-to-date losses to $517 million, he said.

Shorts have been building their position in Clover Health as its stock price has been rallying, Dusaniwsky said.

Following two days of wild gains, his shares are now worth $682 million, bagging him a paper profit of more than 4,000 percent. 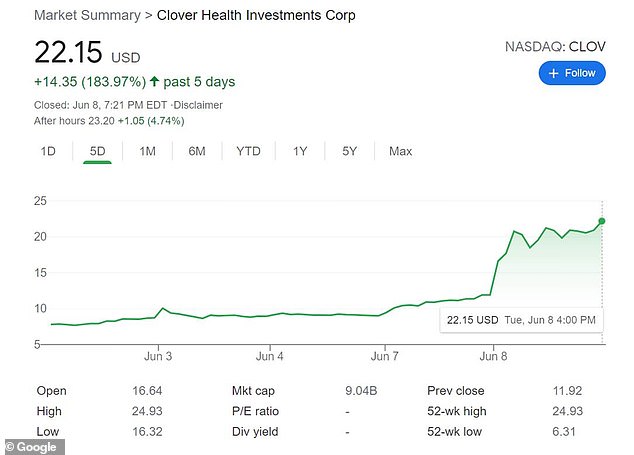 The Medicare-backed insurance seller closed the trading day at $22.15, almost triple its price of $7.64 at the end of May, as a record 718 million shares in the firm changed hands

Since February, the shares had deeply underperformed the wider market and traded below the SPAC’s IPO price, when short-selling firm Hindenburg Research accused Clover of concealing from investors a US Department of Justice enquiry into its business.

Clover has said the enquiry was routine and not financially material to disclose.

The US Securities and Exchange Commission has launched an investigation into Hindenburg’s claims.

Short selling is when large investors or hedge funds borrow shares in a company and sell them short, betting that they will go down and the company might go out of business.

To create a short squeeze, huge numbers of small traders buy up stocks to push the price up.

This then forces large investors to buy the stocks back at hugely increased amounts.

This is what happened with GameStop and AMC stocks, earning these companies the nickname ‘meme stocks.’

Clover joined this group Tuesday along with Wendy’s after small traders cheered the stock. 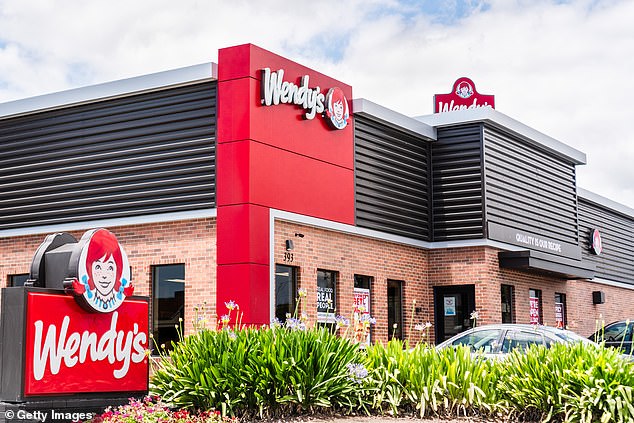 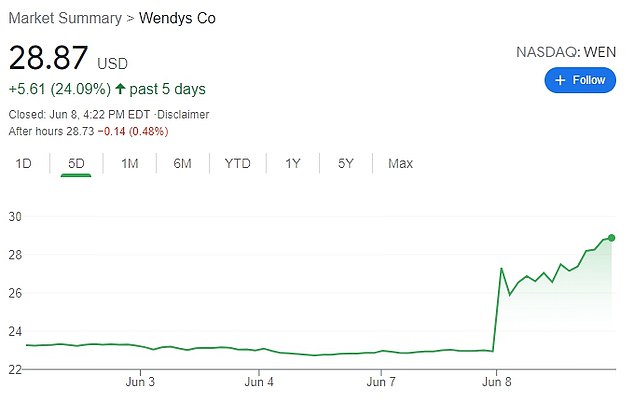 The rally of the fast food chain appears to have been spurred by a post late last week that crudely joked about paid sex acts occurring behind a dumpster at the fast-food chain, in remarks that spread widely on the board and spurred a wave of interest.

Other Reddit users raved that Wendy’s witty social media presence gives the company an edge, and speculated that the new ‘summer salad’ it announced on Monday would drive profits higher.

One user, who goes by the name Chillznday wrote: ‘they just came out with their new summer salad. Experts are already stating that this salad is the salad of the summer.’

The person also tied Wendy’s into the prior ‘meme stock’ frenzy in GameStop shares, noting that the two companies had interacted with jokes on Twitter.

Reddit users also praised Wendy’s for their ‘tendies,’ or fried chicken tenders, a longstanding inside joke in the community.

AMC shares ended the session roughly flat on Tuesday, but remained up 47 percent from a week ago. 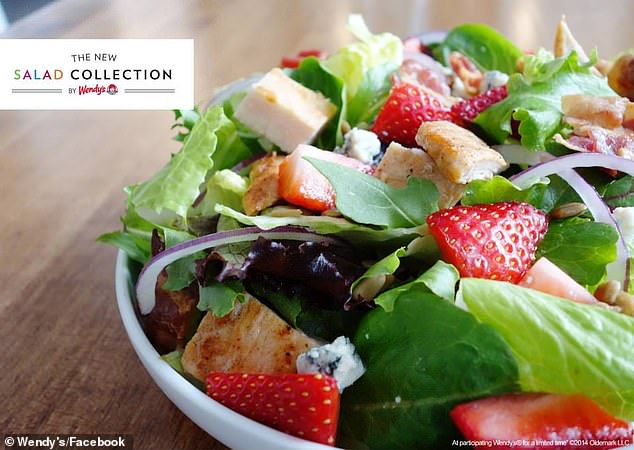 GameStop, which holds its annual shareholder meeting and reports quarterly results on Wednesday, was up 7 percent.

The video game retailer kicked off the meme stock phenomenon in January.

GameStop shares rose more than 1,600 percent that month as WallStreetBets urged members of the forum to buy and hold stock, forcing desperate hedge funds to bid higher and higher to cover their shorts.

Some small investors lost hundreds of thousands when they poured their savings into GameStop shares, only to see the bubble burst in February.

Struggling cinema chain AMC carried on the trend in May as amateur traders pushed stocks to record highs and forced trading to be suspended multiple times per day.

The ‘meme stock’ phenomenon has prompted the U.S. Securities and Exchange Commission to say it was looking into signs of market manipulation.

What are meme stocks? How Reddit users set out to punish short selling hedge funds

Meme stocks are companies popular with a new generation of social media centric amateur traders on Reddit’s WallStreetBets and other online forums.

The users have been using apps such as Robinhood to buy up shares in failing our outdated companies as a way to punish hedge funds that had bet massively against them.

GameStop was one of the most heavily shorted stocks on the market, with more contracts to sell the stock short than there were shares available.

‘Short selling’ is a tool often used by hedge funds. It allows an investor to profit when the price of a share drops. Short sellers borrow a stock, sell the stock, and then buy the stock back to return it to the lender.

Reddit users saw an opportunity for what is known as a ‘short squeeze’, in which rising share prices force short sellers to buy more of the stock to cover their losses.

Users of the Reddit group WallStreetBets urged members to buy and hold GameStop stock, locking up the supply of shares and forcing desperate hedge funds to bid higher and higher to cover their shorts.

Meme stocks are inherently very risky because the huge inflation pushes the value of the company well over what it is actually worth.

Some small investors lost hundreds of thousands when they poured their savings into GameStop shares, only to see the bubble burst in February.

Other popular meme stocks are AMC, which has seen a massive surge in June, as well as Bed Bath & Beyond, Blackberry and Koss Corp.

How His House turns refugee lives into horror film

How the Brisbane Lions are pulling together to prove a point

The CEO of Tunnel to Towers will observe the 20th anniversary of the attack on Sept....