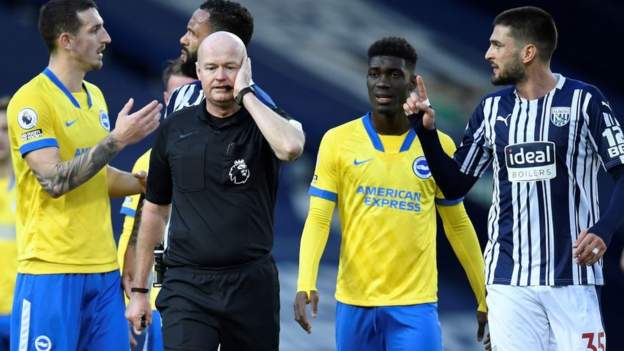 Brighton lost 1-0 at West Brom – but the scoreline does not even begin to tell the story of a match in which the visitors had a goal ruled out after referee Lee Mason blew his whistle twice, and also missed two penalties.

Lewis Dunk’s quick free-kick in the first half sparked a chaotic few minutes as the goal was disallowed, then allowed, then eventually ruled out for good after Mason had viewed the incident on the pitchside monitor following an intervention by the video assistant referee (VAR).

West Brom defender Kyle Bartley had given his side an early lead and Brighton were unable to respond, with Pascal Gross hitting the crossbar and Danny Welbeck smashing the left post from the penalty spot.

Brighton, who dominated possession again, had numerous chances to score either side of the break – Neal Maupay skewing a shot wide and Aaron Connolly firing over the bar from close range.

But West Brom, who had a few chances of their own, hung on to pick up a potentially vital three points in their attempt to avoid relegation.

Brighton searched for a first-half equaliser and thought they had found one – only for it to be taken away almost immediately in remarkable and bizarre circumstances.

Dunk quickly slotted a free-kick into the bottom right corner after Mason blew his whistle while West Brom were still setting up their wall.

But almost as soon as he had blown, Mason did so again – then Dunk and his team-mates began celebrating the goal.

It was ruled out by the referee – but Mason quickly overturned his decision as Brighton’s players strongly appealed against it, arguing Dunk’s free-kick had been taken after the first whistle was blown.

VAR then intervened, prompting Mason to run over to the pitchside monitor to review a potential offside and also whether his second whistle had come before the ball had crossed the goalline.

The referee tried to communicate what was going on with the two managers. Sam Allardyce looked confused – the West Brom boss standing with his hands on his head in disbelief – while Brighton’s Graham Potter responded with a blank expression.

Eventually the goal was disallowed because it was deemed Mason’s second whistle had been blown before the ball crossed the line.

The flurry of chances from both sides in the immediate aftermath was a fitting end to a bizarre and enthralling half of football – and officiating.

Allardyce said before the match he felt West Brom needed to pick up two wins from their three successive home games, including this one against Brighton at The Hawthorns.

They started off on the front foot, forcing two early corners which they were unable to take advantage of.

But their bright opening did lead to them going in front on 11 minutes when Bartley drifted away from his marker at the back post to nod in Conor Gallagher’s perfect delivery.

The Baggies dropped off after taking the lead, allowing Brighton to dominate possession, and on another day could easily have conceded three or four goals.

The two missed penalties and several other clear-cut chances not being converted was a huge slice of luck for West Brom, but they defended resiliently nonetheless – Bartley’s last-ditch tackle on Jakub Moder in the 86th minute typifying this.

The result means the hosts are now eight points from safety in the Premier League table, after a first win at home for three months.

After last week’s defeat by Crystal Palace – when Brighton had 25 shots on goal only for Christian Benteke to volley a dramatic winner deep into added time with Palace’s second effort on target – it felt like a repeated nightmare for the Seagulls.

Okay Yokuslu’s handball gifted Brighton a penalty shortly after Bartley’s opener, but Gross stuttered in his run-up before smacking the ball against the crossbar.

The confusion over Dunk’s free-kick followed, before Connolly forced a save from Sam Johnstone, Maupay skewed Gross’ cut-back wide and then the Frenchman was denied again by the Baggies keeper in a frantic few minutes of stoppage time at the end of the first half.

Connolly then missed again from a few yards out when Johnstone parried Maupay’s shot after the restart, and Joel Veltman nodded over from an unmarked position.

Brighton seemed incapable of scoring and when they were awarded a second penalty, for a foul on Gross by Conor Townsend, Welbeck thumped it against the post.

It summed up a frustrating afternoon.