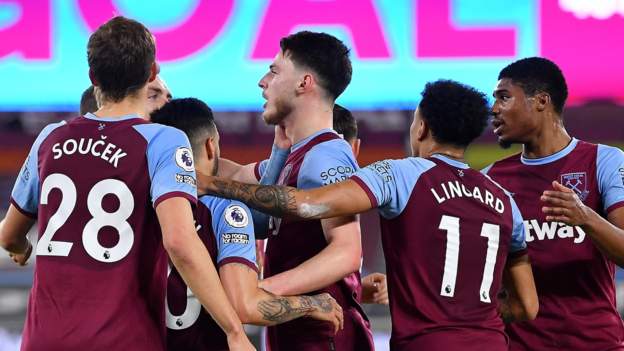 Chris Basham’s lunge on Jesse Lingard helped gift the Hammers, who climb above Liverpool and Chelsea, a sixth win in 10 top-flight matches.

Rice made no mistake from the spot before Diop, who was forced off with a head injury in his previous game, doubled the lead from Aaron Cresswell’s corner.

Sheffield United, 14 points from safety with 14 games left, went close to equalising at 1-0 when Lukasz Fabianski produced an outstanding save to keep out David McGoldrick’s deflected header.

West Ham had been awarded an early penalty when Craig Dawson was fouled by Enda Stevens and referee Simon Hooper pointed to the spot, but after a VAR consultation the decision was overturned.

Chelsea will move back above West Ham if they beat Newcastle in the 20:00 GMT kick-off, but this was another accomplished performance from David Moyes’ side.

West Ham’s phenomenal form after last season’s struggle shows no sign of going off the boil.

Having spent last term locked in a relegation battle, the Hammers are now in a Champions League spot, two points clear of champions Liverpool with 14 games remaining.

Victory over the Blades moved Moyes’ team to 42 points with another 42 to play for, and they have to be considered serious contenders for Europe next season.

Their latest win was down to one moment of madness and one moment of brilliance – Basham’s clumsy foul on Lingard and Fabianski’s save to deny McGoldrick at 1-0.

Fabianski had a busier game than he would have liked while at the other end Aaron Ramsdale denied West Ham after Vladimir Coufal found himself with just the keeper to beat.

But Fredericks sealed another polished team display with the third after a lovely assist from fellow substitute Said Benrahma.

With forward Michail Antonio due back from injury, West Ham look in decent shape with the business end of the season looming.