Suggestions that Western Australia could survive if it seceded from the rest of the nation have been mocked as ‘comic nonsense’ by a legal expert.

Premier Mark McGowan’s coronavirus border closures have reignited debate over whether the should become independent from the rest of the country.

Proponents argue huge iron ore and gold deposits make it not only self-sufficient, but regularly subsidising other parts of Australia.

But constitutional lawyer Professor Greg Craven argued the WA economy waxes and wanes with the iron ore price but never takes responsibility for its lean years. 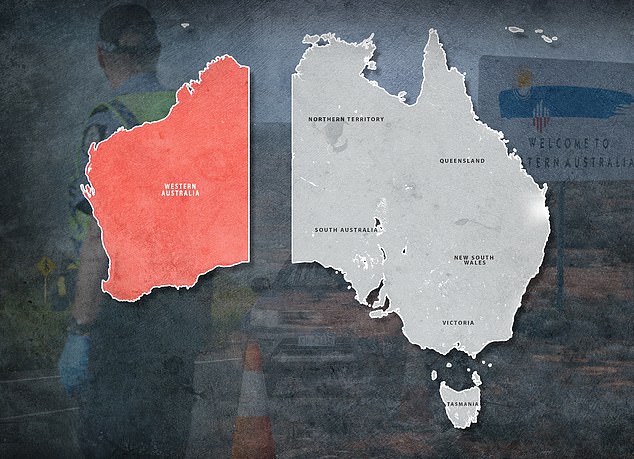 ‘With its stop-start economy, WA mutters secession during every boom. When there is a bust, it blames the east,’ he write in an opinion piece in The Australian.

Professor Craven slammed Mr McGowan’s record of closing the WA border to anywhere with even a few coronavirus cases as ‘deeply authoritarian’.

However, he noted WA residents overwhelmingly supported it – with polls showing more than 90 per cent approved – due to their secessionist streak.

‘Undoubtedly, Premier Mark McGowan is milking Covid separatism for political advantage before the March 13 election. The sandgropers love excluding their fellow citizens, and love McGowan as doorman,’ he wrote.

Professor Craven admitted WA was more independent today than at any time since Federation, when it was dragged kicking and screaming into joining the other states.

‘In a normal world, secession of an Australian state is nonsense. But this is not a normal world. It is a Covid world, where travel is banned, communications disrupted and economies shattered,’ he wrote. 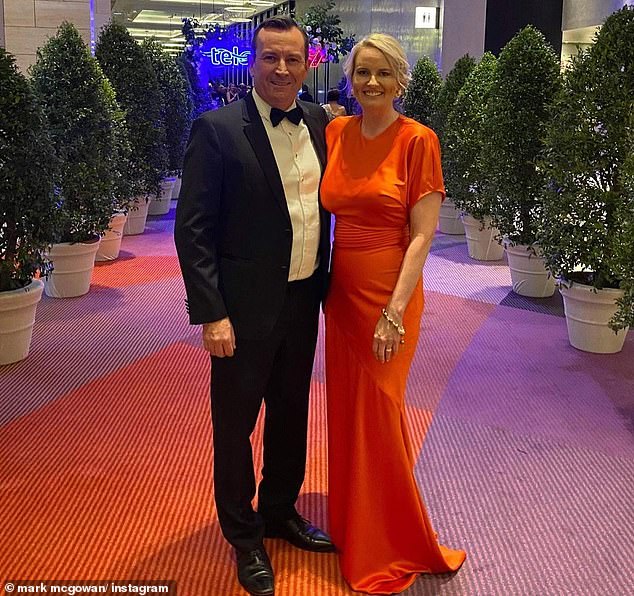 However, the idea that WA could find better friends than the eastern states was ‘inconceivable’ and there was no viable ‘endgame’ to Mr McGowan’s rhetoric.

WA has a long history with secessionist movements, dating to before 1933 when two thirds of residents voted to become a ‘self-governing dominion of the British Empire’ – only for the Commonwealth and the UK parliament to dismiss the idea.

But the move has gathered traction over the past year in which the premier has closed off his state to most of the nation –  and is still keeping it closed to New South Wales and Queensland due to outbreaks.

A poll in October by Utting Research found 28 per cent of 3,500 Western Australians surveyed want their own country.

Should Western Australia be independent?

In December a new separatist political party called the WAxit Party was formed and it will field six candidates at the state election in March.

‘I think Covid and the border closures has heightened people’s sense of what it would be like to have a separate Western Australia,’ he said.

‘There have always been secessionists, but the movement has certainly moved up a notch. Covid played a significant part in relighting that fuse.’

Mr Sewell said his party was gaining members by the day and 30 people joined within two hours of its official launch last week.

He said that criticism of Western Australia’s border closures only favoured the separatists.

‘I think when people saw the interference of other state governments and the federal government they thought ”why? We’re not going to take it”,’ he said. 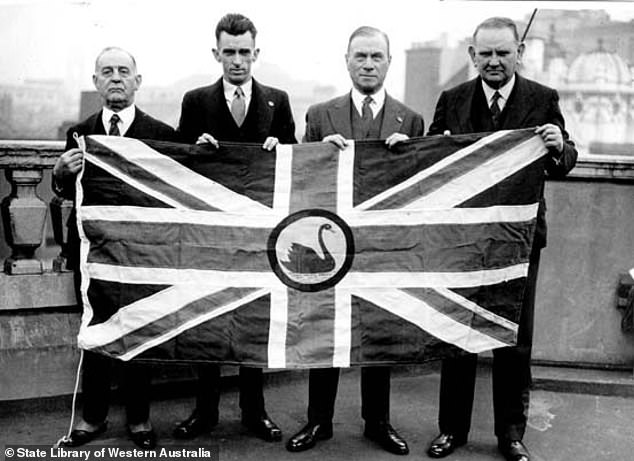 The four secessionist delegates holding the proposed flag for Western Australia, on the roof of the Savoy House in London in October 1934 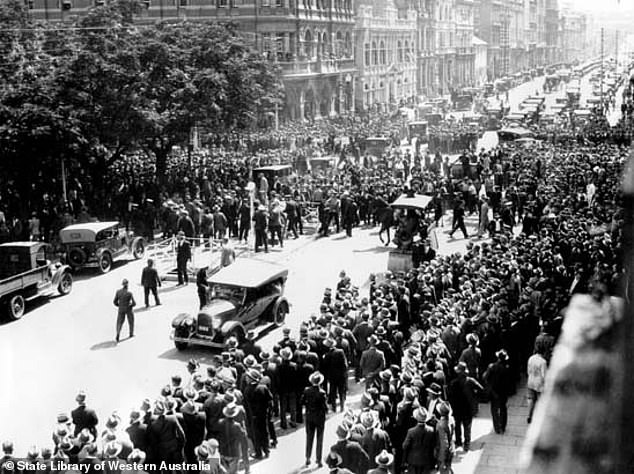 Despite two-thirds of West Australians voting for independence in 1933, the British Parliament said no after receiving a petition from the state. Pictured are unemployed men in Perth during the early 1930s marching to see their premier Sir James Mitchell 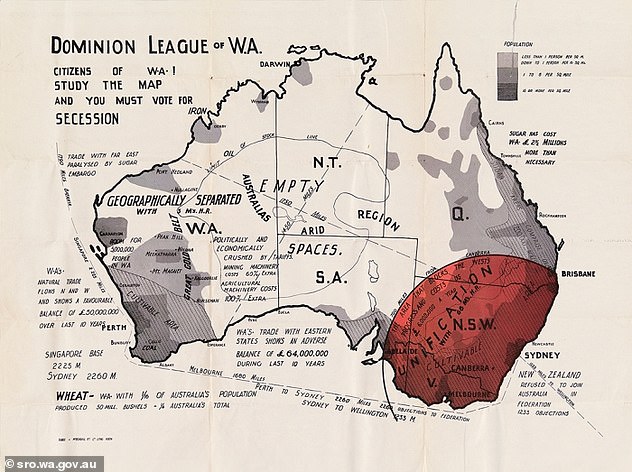 In April 1933, at the height of the Great Depression, 66 per cent of West Australians voted yes in a referendum to secede from the rest of Australia. Pictured is a pamphlet from the time making the case for secession

NSW Premier Gladys Berejiklian has recently tried to pressure Mr McGowan into opening the border, accusing him of ‘inflicting pain and suffering’ on hundreds of thousands of people who are blocked from seeing family or taking holidays in WA.

But Mr Sewell said she was ‘just reacting to her constituents like FIFO workers who want to come here to make money then fly home and spend it in the east which is in itself is not good enough.’

The WAxitparty believes WA has been marginalised by the more popular eastern states and relegated to a ‘mining centre’ with agriculture but little other industry.

Its members are also aggrieved that Western Australia – which is wealthy through exporting iron ore, oil, gas and gold – subsidises poorer states such as the Northern Territory via the general sales tax which is collected and re-distributed by the federal government.

Mr Sewell said he was angry that Western Australia also subsidises schemes such as the management of the Murray Darling Basin which has ‘nothing to do with us’.

‘When we look at what we pay to the federal government and what we get back, there is a $13billion shortfall,’ he said.

How Western Australia voted to secede in 1933

On April 8, 1933, West Australians were asked: ‘Are you in favour of the State of Western Australia withdrawing from the Federal Commonwealth established under the Commonwealth of Australia Constitution Act’

Western Australia can trace the origins of its separatist movement back to just five years after the 1901 federation when the state’s Legislative Assembly resolved that federation had ‘proved detrimental to the interest’ of the state.

In April 1933, at the height of the Great Depression, 66 per cent of West Australians voted yes in a referendum to separate from the rest of Australia.

The Nationalist premier Sir James Mitchell was elected three years earlier on a platform of breaking away from the rest of the country to form a new nation, Westralia.

Despite two-thirds of West Australians voting yes to becoming an independent part of the British Empire, the UK Parliament said no after receiving a petition from the state.

The petition was ruled as being out of order because it didn’t come from the federal government.

‘The Commonwealth opposed secession, and so the matter ended when it became clear that Western Australia would not resort to force or illegal action in the hope of having its way,’ Constitutional law expert Professor George Williams told Daily Mail Australia.

Even if WA voted yes again to become an independent nation, it couldn’t become a separate country unless a majority of voters in a majority of states voted yes.

‘Secession is no more likely to succeed today. Australia’s Constitution simply does not contemplate any part of the nation breaking away, with no state having the right to unilaterally leave the Federation,’ Professor Williams said.

‘Any attempt to do so could provoke legal or even military intervention from a Commonwealth charged with ensuring that the law is upheld.’

While Victoria and NSW cross subsidised Western Australia for most of its history as a state, in recent decades the federal government has considered WA to be so self sufficient it diluted its share of GST proceeds. 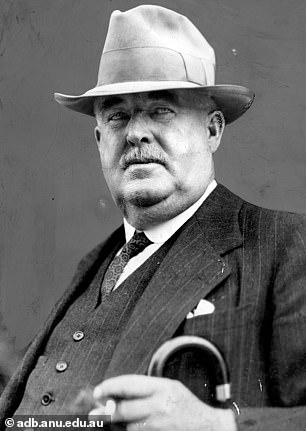 WA’s Nationalist premier Sir James Mitchell was elected in 1930 on a platform of breaking away from the rest of the country to form a new nation, Westralia

In 2015-16, the Commonwealth Grants Commission allocated just 30 cents from every dollar of the Goods and Services Tax collected.

WA may well need more GST funds in coming years, when the Simandou iron ore mine in the west African nation of Guinea possibly begins production in as little as five years, providing competition for Australia’s iron ore.

Brazil could also ramp up iron ore production, as it recovers from the Vale tailings dam disaster in January 2019 that killed 270 people.

University of Sydney constitutional law expert Professor Anne Twomey said WA was likely to need the rest of Australia when China no longer needed so much of its iron ore.

‘Now that it has become a contributor, rather than a recipient, it has complained,’ she told Daily Mail Australia.

‘Perhaps once it has contributed to the other states for around a century, as New South Wales and Victoria have done, it might be justified in its complaints.

‘It is more likely, however, that when the minerals boom ceases, Western Australia will become a recipient again. It should therefore be careful about what it wishes.’ 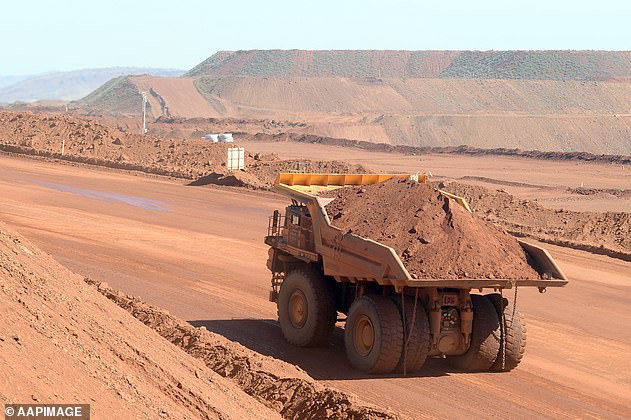 WA, the home of 2.6million people, is the key producer of Australia’s biggest export iron ore, the commodity used to make steel. Pictured is an iron ore dump truck in the Pilbara region

The World Health Organization is studying requests to register 14 vaccines against Corona, including two Russians