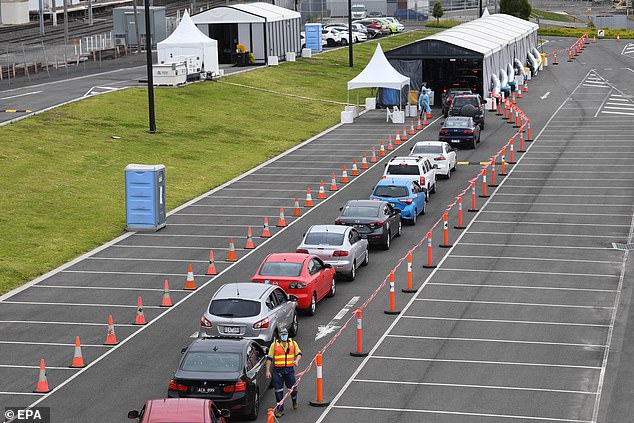 Western Australia has shut its border to Victorians from 12.01am on Friday after the state recorded eight new coronavirus cases.

WA residents will be allowed to return home but must go into self-isolation for 14 days and take a test on day 11.

These rules will apply to arrivals from Victoria who landed on or after 21 December.

They must immediately quarantine at home until 14 days after they landed.

There are now eight active locally acquired cases in Victoria, breaking a 61 day streak of no community infections. Pictured: Testing on New Year’s Eve at Dandenong

Members of the public queue outside a Covid-19 testing centre at Sir Charles Gairdner Hospital in Perth, Australia December 18, 2020

Western Australia has reintroduced quarantine restrictions for those entering the state from Victoria (pictured: Elizabeth Quay in Perth)

‘The timing is terrible, but COVID-19 doesn’t respect dates,’ he said.

‘It doesn’t respect celebrations. What it means is people who are here from Victoria cannot go out tonight on New Year’s Eve. It is really unfortunate, but it is necessary that they stay home. We just cannot afford to take the risk.’

WA has already shut its borders to New South Wales after a Sydney cluster emerged on 16 December.

There are now eight active locally acquired cases in Victoria, breaking a 61 day streak of no community infections after the state defeated its horror second wave.

Three cases identified on Wednesday night visited Melbourne’s Smile Buffalo Thai in Black Rock on December 21 at the same time as a Victorian who had returned from Sydney where there is an ongoing outbreak.

There are about 70 close contacts in isolation across Melbourne.

The first cases of the latest outbreak were two Melbourne women in their 40s and 70-year-old female relative. The returned traveller is awaiting test results.

Thousands of Victorians rushed to get tested on Thursday, haunted by the memory of a brutal four-month lockdown over the winter. Some testing sites had to turn people away because they were overwhelmed.

Acting Premier Jactina Allan apologised for the border restrictions but said they are necessary to stamp out the spread of the highly contagious virus.