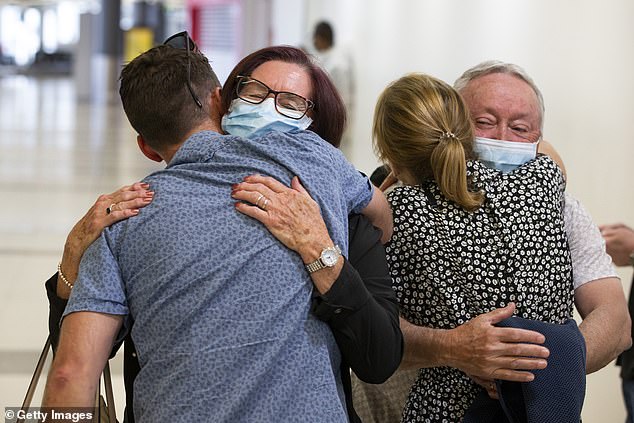 Western Australia will open its border to South Australia on Christmas Day despite the outbreak in New South Wales.

WA Premier Mark McGowan has confirmed anyone from South Australia will be allowed into the state without having to quarantine from 12.01am on December 25.

The news has come as a relief to many families who feared Sydney’s northern beaches cluster may ruin their Christmas plans.

Western Australia will open its borders to South Australia on Christmas Day, it was announced on Tuesday (relatives hug each other after landing at Perth Airport)

South Australia will reach 28 days without any local transmission of the virus on Christmas, meaning residents will be considered ‘very low risk’ to the western state.

The earliest direct flight leaving Adelaide will land in Perth just before 2pm on December 25, meaning families can still get together for a Christmas lunch.

It’s a different story for those living in NSW after an outbreak in cases on Sydney’s northern beaches led to WA closing its borders again on Saturday.

The cluster in the area grew to 91 on Tuesday with eight new infections from 44,000 tests.

Mr McGowan said that despite the low numbers of infections, WA would not lift its borders until NSW goes 28 days without community transmission.

‘I’m very pleased for NSW and very pleased for all the people who were at risk. I think the shutdown of the northern beaches … was a good decision and I think that will have helped. They’re not out of the woods yet but it’s really very, very positive,’ he told 6PR Radio.