Emotions run high on and off the field as rugby league players and fans remembered one of the game’s much loved characters during a tense NRL stand off on Sunday.

The Magpies draped a jersey emblazoned with the number seven on the first seat on their bench which was left vacant as a mark of respect for Raudonikis two days shy of what would have been his 71st birthday.

But tributes celebrating Raudonikis’ life were soon overshadowed as the Tigers’ poor first-half showing against the Cowboys sparked angry scenes.

Tigers coach Michael Maguire exploded in his box in a fury, far from impressed with his side’s lacklusture first-half efforts. 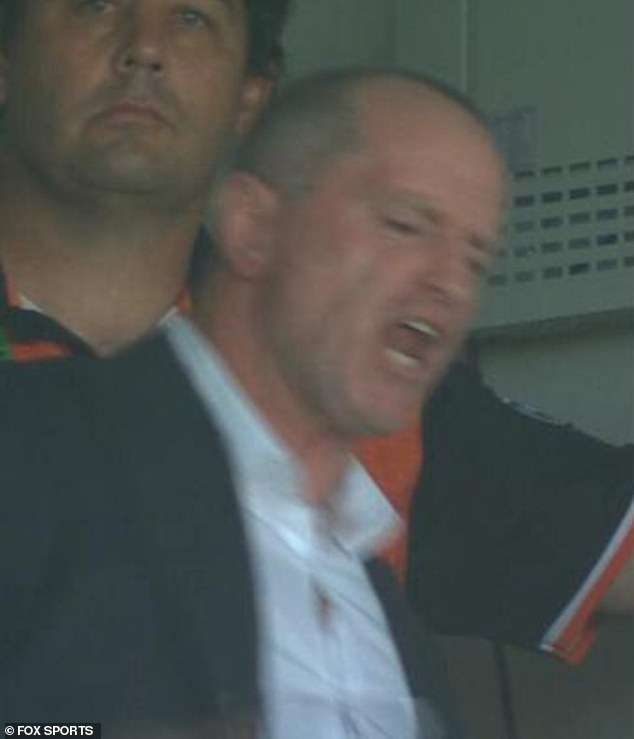 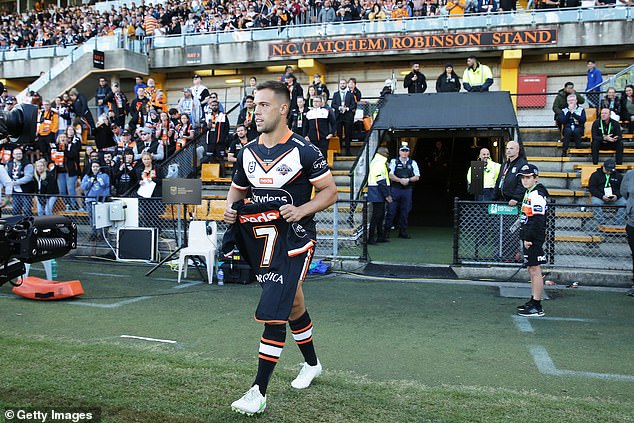 Television cameras captured Maguire throwing his pen down in disgust and storming out of the coaches box to head down the dressing sheds to give his side a half-time spray.

Trailing 28-6 at half-time Tigers were booed from their field by their own fans as rugby league greats and fans flocked to social media to express their disgust.

‘I am lost for words. It’s very hard to watch. Our players show no confidence. Where do we go from here?. How do we become a winning, confident club? This is heartbreaking,’ Blue Wiggle and Tigers tragic Anthony Field tweeted.

Another fan fumed: ‘What a joke of a club 10 years of no finals and we are versing the worst team in the comp missing half their players and in memory in of one of the greatest men to play the game and this is the performance you put in at home?” 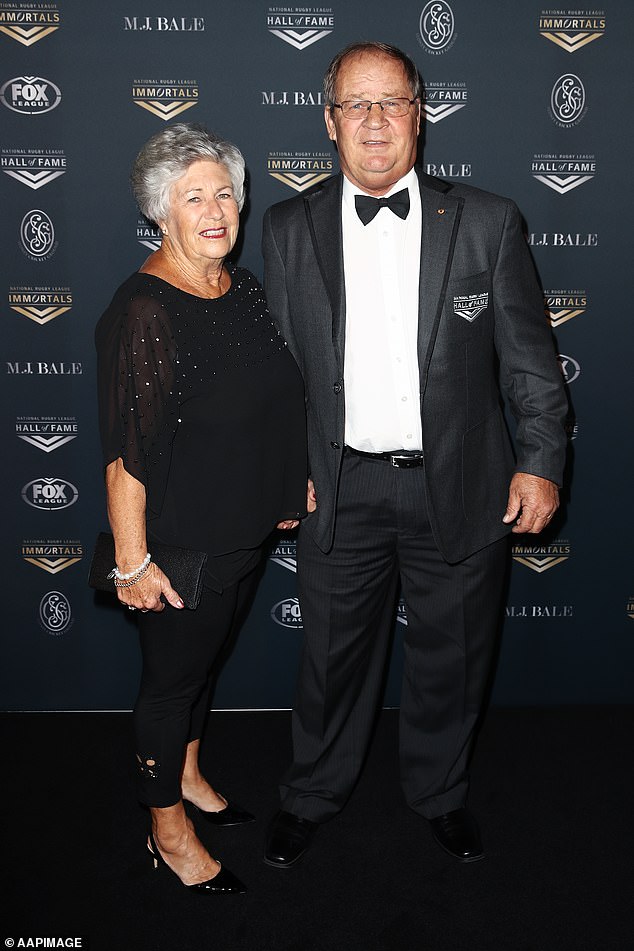 Tributes continue to flow for Tommy Raudonikis, who died on Wednesday. He’s pictured with his partner Trish Brown at an event in 2018

‘Madge (Maguire) will tear the paint off the walls,’ he tweeted.

The Tigers staged a spirited second half comeback before going down 34-30 against the Cowboys, who were winless in 2021 before the match.

The Western Suburbs Magpies fared much better in their NSWRL NSW Cup clash with a 34-14 win against Mounties.

The tributes continued into the NRL match where Tigers halfback Luke Brooks entered the field holding a number seven Tigers jersey before joining his side in a team huddle for a one minute silence. 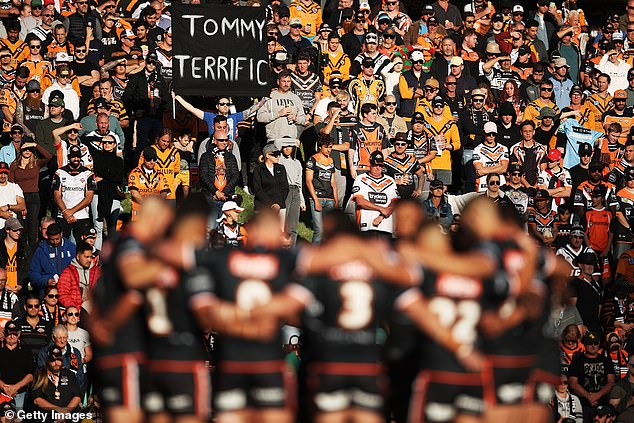 Players and fans stood united during a minute’s silence held prior to kick-off in memory of Tommy Raudonikis, who would have turned 71 on Tuesday 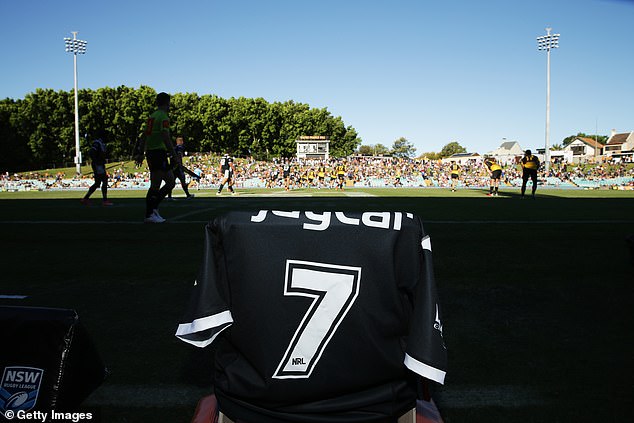 Raudonikis died just six days shy of his 71st birthday, and his partner Trish Brown was by his bedside when he passed.

Known for his toughness and uncompromising style of play, the halfback was a straight shooter who was much loved by fans.

One of the sport’s most cherished characters, the playmaker known as ‘Tommy Terrific’ played 239 first grade games for the Wests Magpies and Newtown Jets over the course of his long career.

His former Magpies coach Roy Masters was among the first to lead the outpouring of tributes. 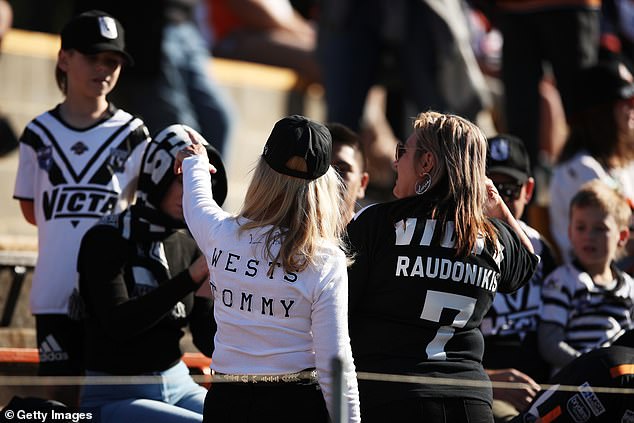 ‘He fought on until cancer finally did to him what a legion of English, French, and New Zealand players could not,’ Masters wrote for the Sydney Morning Herald.

Western Suburbs has remembered one of its greatest to don the Magpies jersey.

‘As both player & coach, Tommy has been at the heart & soul of the Magpies and their supporters for 50 years. Our thoughts are with Tommy’s family,’ the club posted online.

Wests amalgamated with the Balmain Tigers at the end of 1999 season to form a joint NRL venture.

‘Tommy wore the black and white with fervour and passion like no other and is revered for his contribution to our club, our state and our country,’ Wests Tigers chairman Lee Hagipantelis said.

‘Tommy will always be remembered as a true legend and unequivocally crucial part of the fabric of Western Suburbs and, in turn, Wests Tigers, and his legacy in the game will certainly live on in the DNA of our club.’ 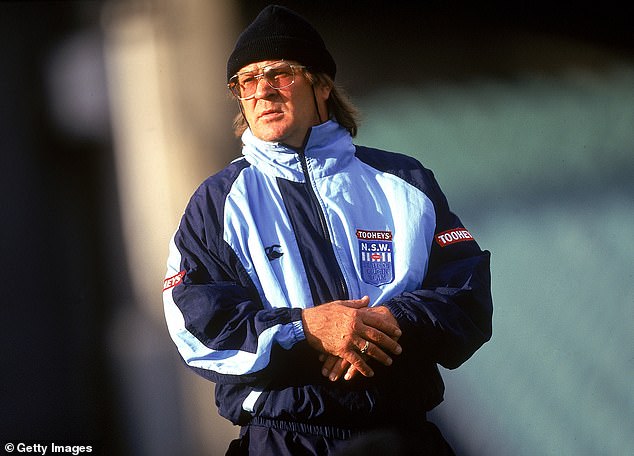 ‘There will never be another Tommy Raudonikis,’ V’landys said.

‘Tommy was everything that makes rugby league the greatest game of all. He grew up in a migrant camp in Cowra and went on to become NSW’s first Origin captain.

‘As a player there were none tougher. He was a brilliant halfback, what he lacked in stature he more than made up for in smarts and courage to become one of the best players of his era.’ Raudonikis was one of best to don the Western Suburbs Magpies jersey. He’s pictured scoring a try against South Sydney in 1979

Born in Bathurst in 1950, Raudonikis was the son of an immigrant Lithuanian father and a Swiss mother.

He  joined the RAAF as an Engineering Apprentice in 1967 and spent almost three years at the RAAF’s Wagga Wagga base in the NSW Riverina before moving to Sydney in 1969 to play the first of 201 games with Western Suburbs.

Raudonikis also played 29 Tests for Australia and captained the NSW Blues in the inaugural State of Origin game in 1980.

In 1972, he won the Rothmans Medal awarded to players voted by referees as the best and fairest for the season.

He coached the Magpies for the four seasons in the mid-1990s before they joined forces with the Tigers. 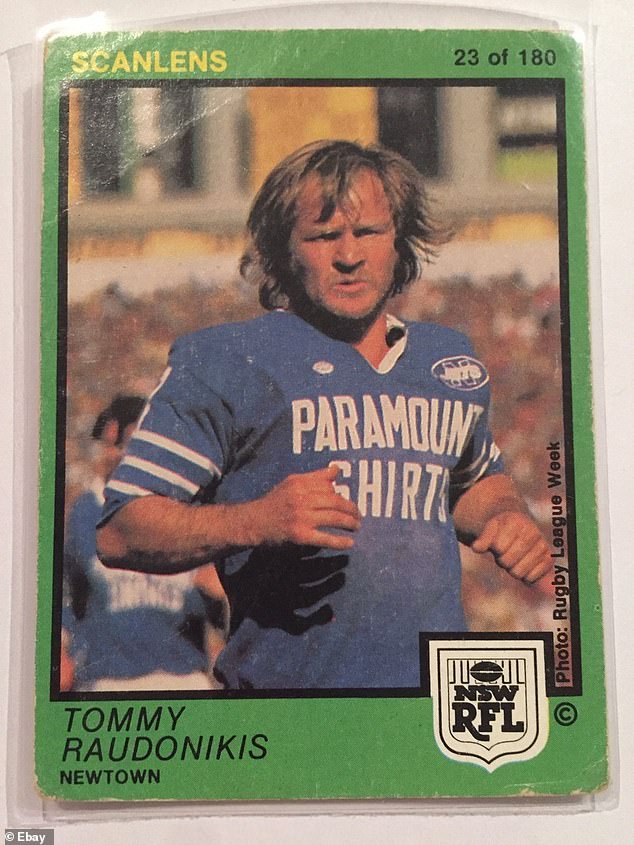 Raudonikis also led the NSW Blues to an Origin series win against Queensland in 1997, where he famously coined the ‘cattle dog’ cry which sparked two infamous all-in-brawls between the two teams.

Raudonikis battled through a series of health complications for almost three decades, including a quadruple bypass in 2006, along with testicular, throat and neck cancers.

Two years ago, Raudonikis was diagnosed with a cancer in his neck so close to his brain that doctors were unable to operate on him. 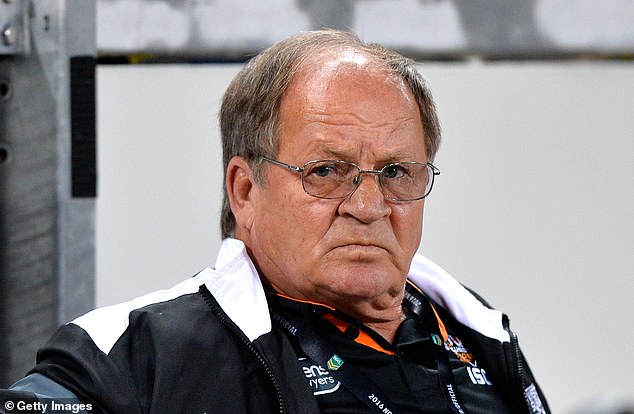 Tommy Raudonikis’ sad passing has sparked an outpouring of tributes. He’s pictured in 2016 at a Wests Tigers NRL game