What about the Summit of the Americas? 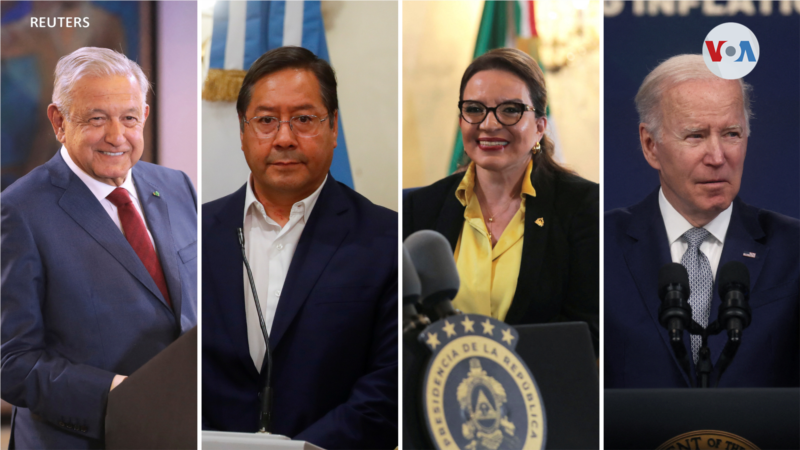 The possible exclusion of Cuba, Venezuela and Nicaragua from the IX Summit of the Americas has generated a high-level diplomatic dustup in Latin America.

A handful of nations in the region ideologically aligned with the left have criticized the fact that the United States, the host, excludes the governments of Havana, Caracas and Managua from the event, which will take place from June 6 to 10 in Los Angeles, California. The presidents of Mexico and Bolivia have said that in such a case, they would be absent from the continental meeting.

The White House of President Joe Biden, host of the event, is conducting consultations with multiple Latin American countries as a result of the positions of the dignitaries of Mexico and Bolivia not to attend the event if Venezuela, Nicaragua and Cuba were not invited, he was able to learn of the Thursday the Voice of America.

“The invitations have not been sent so far. We hope they will come out soon,” the spokesman said.

The Summit, which is held every three years, has been seen since its inception as an opportunity to unify regional efforts to deal with issues such as migration, democracy and economic development. Washington values ​​the meeting as a strategic priority to promote joint efforts in favor of democracy in America.

In this edition, the US insists on the need for a commitment to democracy in the region and seeks to discuss issues such as free elections, citizen participation and human rights, in which Cuba, Venezuela and Nicaragua have failed, according to reports from independent organizations.

The US has imposed sanctions on Cuba, Venezuela and Nicaragua for their anti-democratic practices and violations of the fundamental rights of their citizens.

The three countries are also the main continental allies of Russia, with whom the US, Europe and other allies maintain a diplomatic row, intensified after the invasion of Ukraine.

Cuba was excluded from the first six continental summits, but did participate in the 2015 meeting in Panama, where Presidents Raúl Castro and Barack Obama met while trying to improve their binational relations.

The first continental Summit was organized by the government of former US President Bill Clinton, in 1994, in Miami. The last one was in Lima, Peru, four years ago. This event would be the second to be held in the US.

Regional dust after position of the president of Mexico

The first Latin American president to publicly raise his tone due to the possibility that his colleagues from Cuba, Venezuela and Nicaragua were not invited was the Mexican Andrés Manuel López Obrador.

“We have a very good relationship with the government of President [Joe] Biden and we want everyone to be invited. That is the position of Mexico (…) if there is exclusion, if not everyone is invited, there will be a representation of the Mexican government, but I would not go,” López Obrador said on Tuesday, shortly after visiting Cuba and meeting with his counterpart Miguel Díaz-Canel and greet Raúl Castro.

Xiomara Castro, president of Honduras and wife of former Honduran president Manuel Zelaya, a longtime ally of Hugo Chávez and Nicolás Maduro, also said that a Summit of the Americas would not be such “if all the nations are not there.”

The president of Argentina, Alberto Fernández, confirmed during an official visit to Germany that he would participate in the continental meeting next month, but advocated that all the governments of the Americas be invited.

“I ask the organizers what López Obrador has asked for: to invite all Latin American countries,” said the temporary president of the Community of Latin American and Caribbean States (Celac).

The Mexican president responded on Thursday to a question from journalists that “no” he feared that the US would take its position as a boycott of the Summit.

“Our treatment is given on an equal footing and has always been very respectful,” López Obrador said, reported Millennium.

Invitations to the Summit have not been sent yet

Brian Nichols, assistant secretary of state for Western Hemisphere affairs, told the Spanish newspaper on Thursday The country that his government did not find it “convenient” to invite the governments of countries “that do not respect democracy” to the meeting.

The US State Department told the voice of america that the Summit is an event organized by the White House and directed any questions to it.

Jen Psaki, the White House press secretary, said Tuesday that no “final decision” had been made about the guests at this time.

State Department spokesman Ned Price clarified this week that the institution will have “more to say” on the matter as the summit draws closer.

“It will be an opportunity for countries throughout the hemisphere to come together to talk about our shared values, the shared interests that bind us together. The White House, as host of the IX Summit, will determine which countries it will invite,” Price told reporters on Tuesday.

Gregory Meeks, a congressman and president of the Foreign Relations Committee of the House of Representatives, explained to VOA that the possible invitations to the governments of these three countries was a subject still under debate.

“I am hearing from many friends in the Caribbean and in Central and South America. And I intend to be more involved (…) I intend to have some conversations about it, “Meeks said Thursday.

According to the US legislator, the government is holding talks on the matter with its “allies” and is aware of the different positions of other nations. “They’re trying to balance the two,” he added.

Although there is no specific date for sending the invitations, they are usually issued the month before the Summit.

A strategy before the elections?

Latin America has debated for decades between the pragmatic coexistence with dictatorships and their exclusion by democratic countries, points out the former Venezuelan ambassador and specialist in international relations, Emilio Figueredo.

“You cannot pretend to be right with God and with the devil,” he says, denying that the Summit can be classified as a failure if some governments decide not to attend.

“It would be a failure to have to give in inviting dictatorships to a summit. It is a game of chess. Is Mexico going to be able to create an ‘anti-summit’ with Argentina? Perhaps [México] Are you going to stop attending, with your particular and necessary relationship with the United States?” he asked.

The expert Emilio Figueredo does not consider that the controversy over the guests or those excluded from the Los Angeles event should be reduced to a conflict between the left and the right.

The idea of ​​excluding Cuba, Venezuela and Nicaragua from the continental summit may be an attempt by the Biden government to “lower the costs of a slightly freer foreign policy” than that proposed by the Republican party, says the Venezuelan specialist in relations international Luis Angarita.

“The conflict of the position of the United States derives from the campaign of the mid-term elections”, to be held in November, he tells VOA. The Republicans aspire to achieve a resounding victory within five months and will use Biden’s foreign policy mistakes as a spearhead, he predicts.

Influential Senators Robert Menéndez (Democrat) and Marco Rubio (Republican), of the Senate International Relations Committee, oppose the attendance of the presidents of Cuba, Venezuela and Nicaragua at the Summit.

“This is like inviting the fox to the hen’s house,” Menéndez told The Hillvaluing the Summit of the Americas as an opportunity for regional democracies, not for “authoritarian thugs.”

The possible exclusion of three nations from the Los Angeles event must imply “some pact” within the internal politics of Biden’s party in order to keep domestic waters in peace and achieve better electoral results next November, Angarita said.

The analyst warns that this rivals his attempts at “change” in regional politics, more prone to regional dialogue than that of the previous presidency.

He underlines the Venezuelan case as an additional complication to the controversy of who will be invited: Guaidó or Maduro.

“It is a contradiction to have two representations or to maintain an ambiguous position on Venezuela,” he said.

Figueredo, for his part, insists that the United States “cannot submit to a kind of blackmail” from governments close to the trio in question.

My Best Friend Unexpectedly Died. Here’s What I Learned About Unrelenting Grief.

Prince Harry and Meghan Markle have reportedly hired Michael Jackson's former bodyguard as the head of their security team as the Duke of Sussex was pictured with his...