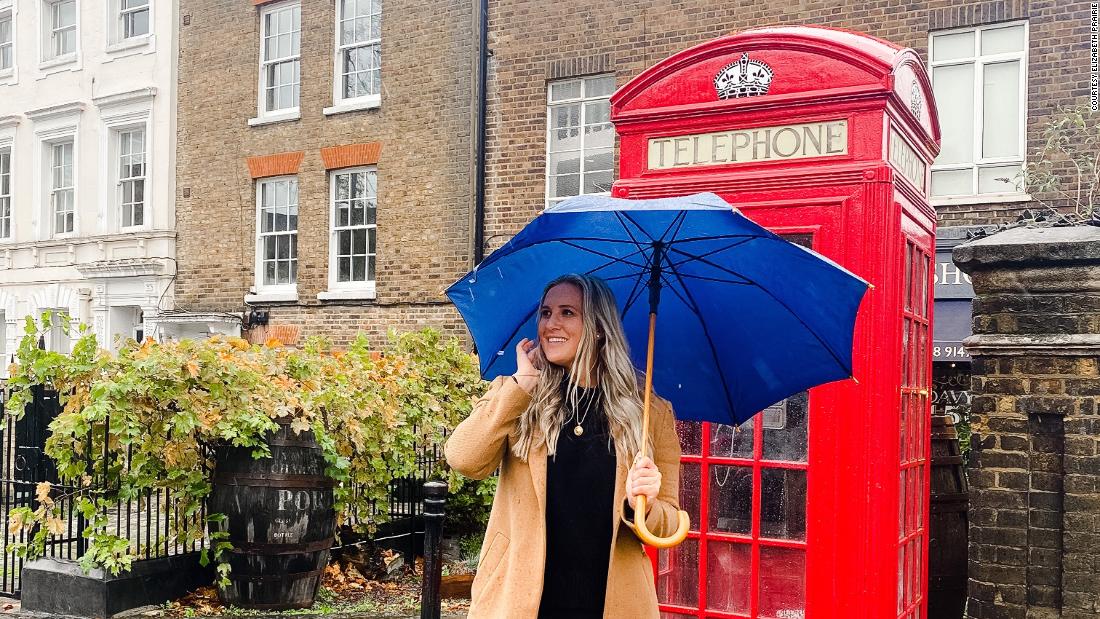 American traveler Elizabeth Prairie, recently landed in the UK for a four-week trip, watched the national address from her Airbnb in London’s Notting Hill neighborhood.

She’d arrived in the UK capital almost two weeks prior and was about to come out of her 14-day compulsory quarantine.

Prairie had planned a four-week vacation in London, accounting for quarantining while also allowing time to explore, work remotely and enjoy her break.

When she boarded her British Airways flight from JFK airport, Prairie knew England had instituted a 10 p.m. closing time on all bars and restaurants, and London was entering stricter “Tier 2” restrictions that limited access to them.

But the digital marketer figured she’d still be able to visit London’s landmarks and have a semi-normal time. She was daydreaming about her first-ever trip on the London Eye observation wheel — and shortlisting restaurants where she could enjoy al fresco dining.

But listening to Johnson’s Halloween announcement, Prairie realized she was going to spend the entirety of her four-week trip in lockdown.

“It’s that feeling of 2020, where you kind of have to roll with the punches — nothing’s a guarantee anymore. So I wasn’t that surprised about the lockdown, in the sense of — everything is so fluid in 2020 and nothing can really shock me anymore,” she tells CNN Travel.

The new England regulations — set to last until at least December 2 — aren’t as strict as the UK’s first lockdown, which also applied to Wales, Northern Ireland and Scotland (this time round, the different nations have their own rules).

In “lockdown 2,” people can leave home for exercise as often as they like. They can meet someone else from another household to exercise together. Plus, many cafes, bars and restaurants are open for takeout.

Still, many other businesses have been forced to shutter their doors. Museums, galleries and London landmarks are all closed, and it’s not permitted to go inside another person’s home.

And while London locals might be getting by on brisk morning runs and restaurant takeaway, it makes for a pretty limiting and unusual vacation experience.

Prairie, 29, is based in New York but is a longtime Anglophile. The founder of a marketing company called Social Static, she started spending a lot of her time traveling and working remotely a couple of years ago.

London’s her favorite destination — and she already visited once during the pandemic, back in July 2020. She has a couple of close friends in the UK and her goal is to split her time between London and New York.

A self-described “social media guru” Prairie has an active Instagram and TikTok, where she posts about her transatlantic travels to 10,000+ Instagram followers and 21,500 TikTok fans.

UK residents have largely been restricted from entering the United States since March, but Americans can still travel to England — as long as they quarantine upon arrival.

Still, not many US residents are taking advantage of this — or if they are, it’s for the purposes of visiting family, education or emergency travel.

After all, there aren’t that many flights available, there’s a compulsory quarantine at the other end and there’s not a whole lot to do in a country under lockdown.

But Prairie hasn’t been put off by the pandemic.

When she visited London in July, Covid cases were falling, not rising, and businesses were opening up for the first time in several months, as the UK’s first lockdown came to an end.

On both trips, Prairie stayed in the same Notting Hill flat she found on Airbnb.

The owner told her that this apartment — situated amid the pastel-colored streets of one of London’s most Instagrammable neighborhoods — was booked solid all through 2019. But in 2020, as travel grounded to a halt, it’s been a very different story, and the host was delighted to have some business.

On both trips, Prairie took a Covid test 72 hours before flying, via free resources available in New York state. This isn’t required by UK law, but Prairie says she did it for the peace of mind, and out of her commitment to be “a good global citizen.” She’ll take another test upon her return to the United States.

She also swots up on US Centers for Disease Control and Prevention rules and regulations at home and stays abreast of what the rules are in the UK too.

Her flights in the summer were eerily quiet, and so was her most recent hop across the Atlantic. “Typically, I’m the only one in the line for security and there are usually only under 20-25 passengers on my flight,” says Prairie.

On both trips, she slept, masked up, lying across empty seats on the Boeing 777.

During Prairie’s July trip, she was able to eat out at restaurants and cafes, as restrictions had been eased. They’ve since ramped up again.

Before departing for her October trip, Prairie was keeping close tabs on the situation in the UK. Covid cases were rising in England and more restrictions were being implemented, but it didn’t seem like a country-wide lockdown was on the cards, as the government instead categorized different regions into Tiers depending on Covid transmission levels.

“I was watching, and it seems like [Boris Johnson] was skewing to not doing another lockdown,” Prairie recalls.

But while the new rules may have taken by her surprise, Prairie says vacationing in a locked-down country isn’t all that bad.

“I’m close to Hyde Park, I’m able to explore, and to be outside and to be in fresh air, to explore the neighborhood,” she says. “I don’t mind this, being able to go out for walks, going to the parks, getting takeaway, none of this bothers me at all.”

It helps, acknowledges Prairie, that she’s been to London many times. Sure, she still had stuff on her city bucket list, but living as a (locked down) local for a few weeks is an easier pill to swallow when she’s enjoyed the city’s spoils in the past.

And it’s still relaxing, she says, getting to escape from New York for a bit.

“Because I have so many friends and clients and family there, I’m so busy seeing everybody. When I come here, I actually come here specifically because, for me, it’s a getaway. I’m relaxed, and I can be the most creative,” she says.

“The quarantine period and lockdown have been seen in my eyes as a positive time to focus on creative projects and myself while the city is quiet.”

Still, explaining this mindset to her parents — who are healthcare workers — and other US-based friends and loved ones has been tricky. She says they understand that she finds visiting the UK calming, but still worry.

“Would my mom prefer me to be home? Probably. But I’m not,” says Prairie.

Prairie has been enjoyed takeaway food and drink during her time in locked down London.

For one, there’s the small matter of the compulsory two-week quarantine — during which time she was forbidden to leave the house.

During her two weeks of confinement, Prairie says she used the local Sainsbury’s grocery store for food delivery, complemented by the occasional UberEats delivery.

Now she’s able to go out and about, she’s observed a different atmosphere from the London she visited in July.

“It definitely has a different feeling than the summertime, of course, when the promotion was to go out to eat and to gather with friends, you know, still in small groups, but that was the push. And then now, obviously, the tone has changed.”

Still, Prairie says the atmosphere in London doesn’t feel as “somber” as the original lockdowns and shelter-in-place orders that took place across the globe in March and April.

Prairie is passing the days with Autumnal walks in London’s parks, including Regent’s Park, pictured.

While the scope of her vacation has shrunk, Prairie still has some lockdown-approved activities on her to-do list.

Her vacation will be spent enjoying autumnal walks in London’s parks and ordering food from local Notting Hill businesses.

For Prairie, there’s a novelty in these everyday activities because they’re taking place in a different country.

She tells CNN Travel she’s planning a trip to Regent’s Park to admire the golden and russet colored leaves currently strewn across the pathways.

“It looks like it’s just so colorful and beautiful,” says Prairie.

She later sends through photos of a Saturday excursion to the park.

She also earmarked Notting Hill spots she wants to get takeout from, including Portobello Road bar Gold and Aussie cafe Farm Girl.

Prairie has also considered potentially traveling to Italy or Paris, but she’s hesitant. She does her research, she says, and recently declined a complimentary stay in Italy because she was worried she’d be turned away by border control.

Prairie says part of the reason she feels comfortable in London is because she’s confident there will always be flights to and from the United States, even if she might be one of the only people on them.

Chronicling her travels on Instagram has left Prairie open to criticism from some, who are angry that she’s traveling during the pandemic, and staying in a foreign country during a lockdown.

“That can be a bit frustrating, because I think it comes off that it’s a bit irresponsible, when I really take every extraordinary precaution to be a responsible global citizen when I’m coming here,” says Prairie. “London’s a place that I love. And if I can support the community here, while I’m here, I would like to do so.”

Forget the R rate, it’s the Covid-19 clusters we need to stop