SAGE‘s doomsday models which predicted more than a thousand coronavirus deaths at the peak of a third wave later in the year cherry-picked ‘very pessimistic assumptions’, scientists warned today.

Independent experts told MailOnline the data used by the Government’s scientific advisers ‘didn’t match’ how well the vaccine rollout is going and played down how effective the jabs are.

Yesterday a tranche of papers released by the Scientific Advisory Group on Emergencies (SAGE) suggested that lifting curbs fully in June could cause push the NHS to the brink again.

The expert group said social distancing, mask wearing and Covid vaccine passports will need to remain in place for at least another year to keep the virus in check even when the most brutal curbs are lifted.

It added that while the vaccines prevent the vast majority of people from falling ill and dying from coronavirus, they ‘are not good enough’ to see all curbs lifted ‘without a big epidemic’.

The gloomiest modelling was done by the London School of Tropical Hygiene and Medicine, which forecast ‘a resurgence in admissions and deaths comparable to the magnitude of the second wave in January’, when there  were more than 1,000 deaths a day.

The LSHTM research team warned a third wave could be even larger if there is a British outbreak of a new Covid variant which makes vaccines weaker.

But their pessimistic model assumed the AstraZeneca vaccine only reduced transmission – the number of people who continue to spread Covid – by 30 per cent, which is far more cautious than data from the real world suggests.

The Government’s own analysis of Britain’s vaccine rollout, carried out by Public Health England, found the jab slashes infections by about two thirds after just one dose and more than 70 per cent after both injections.

Professor Spector, who is running a major Covid symptom tracking study tracking a million Brits, slammed LSHTM’s modelling. He said that while there may be small outbreaks of Covid in the future, ‘we’re not going to see anything like we’ve seen previously’ now that half the adult population has been immunised. 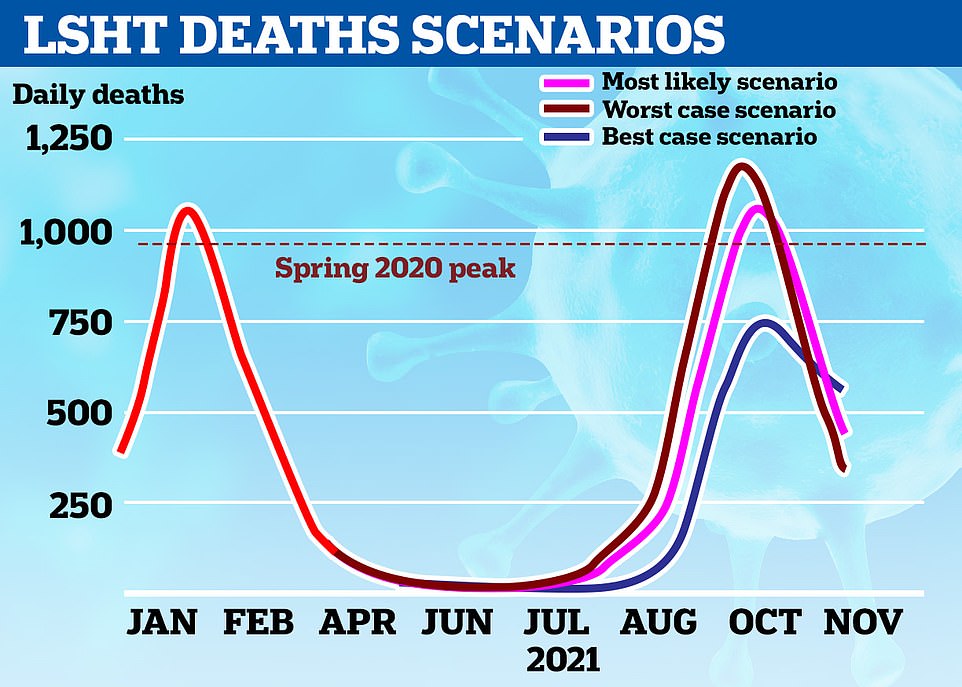 The gloomiest modelling was done by the London School of Tropical Hygiene and Medicine, which forecast ‘a resurgence in admissions and deaths comparable to the magnitude of the second wave in January’, when there were more than 1,000 deaths a day. Its pessimistic model assumed the AstraZeneca vaccine only reduced transmission – the number of people who continue to spread Covid – by 30 per cent, which is far more cautious than data from the real world suggests. 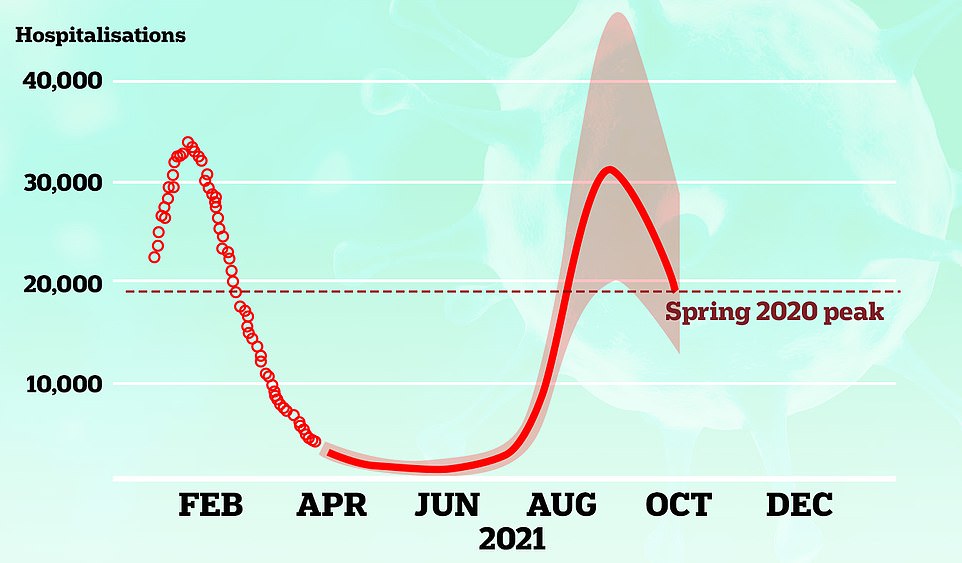 LSHTM’S HOSPITALISATIONS: The group has said that in a worst case scenario there could be more than 30,000 in Britain’s hospitals with the virus every day. It warned a third wave of admissions could be even larger if there is a British outbreak of a new Covid variant which makes vaccines weaker 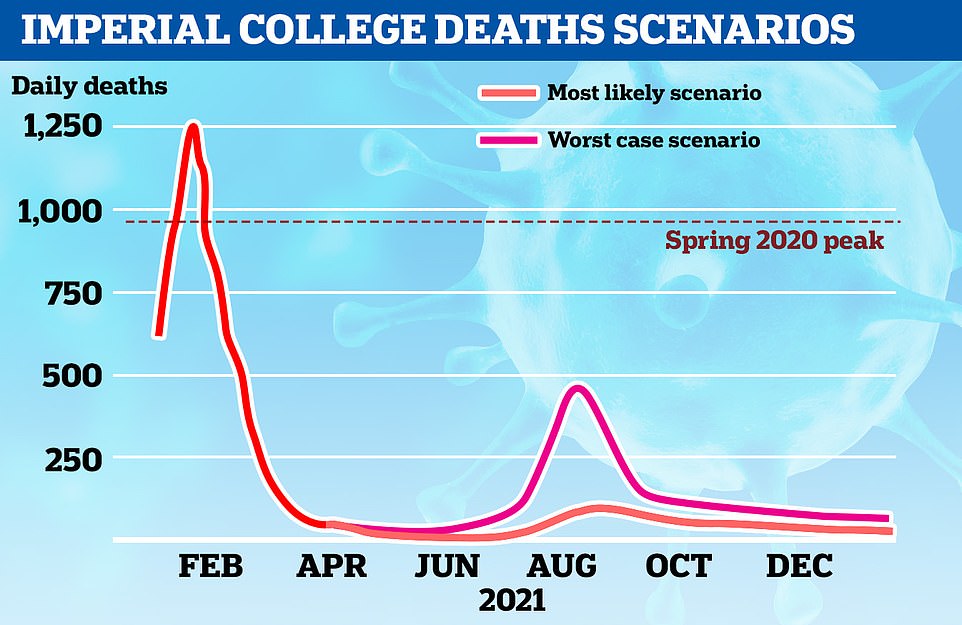 Modelling by Imperial College London shows how they expect daily deaths to stay below 100 in any third wave, if vaccine uptake is 90 per cent in under-50s and that jabs cause a significant reduction in transmission after the planned relaxation on June 21. The solid red line shows the actual number of daily deaths recorded, while the lighter line reflects the team’s best guess and the pink line is what could happen in the worst-case scenario 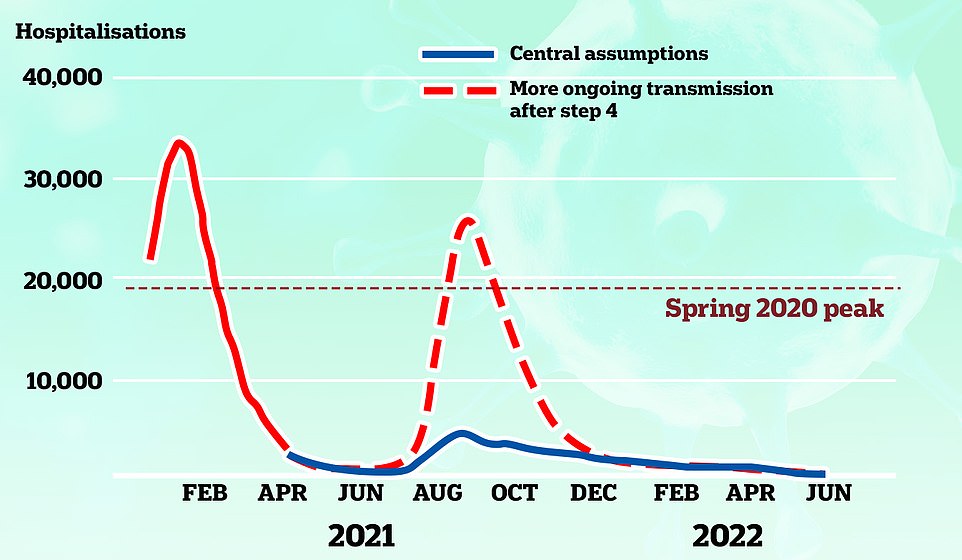 IMPERIAL’S HOSPITALISATIONS: Most scientists told MailOnline the most realistic assumptions were those made by the team at Imperial College London. The team’s most-likely scenario also estimated that coronavirus patients will take up 5,000 hospital beds during any future spike, far lower than the 30,000 occupied during the darkest days of January 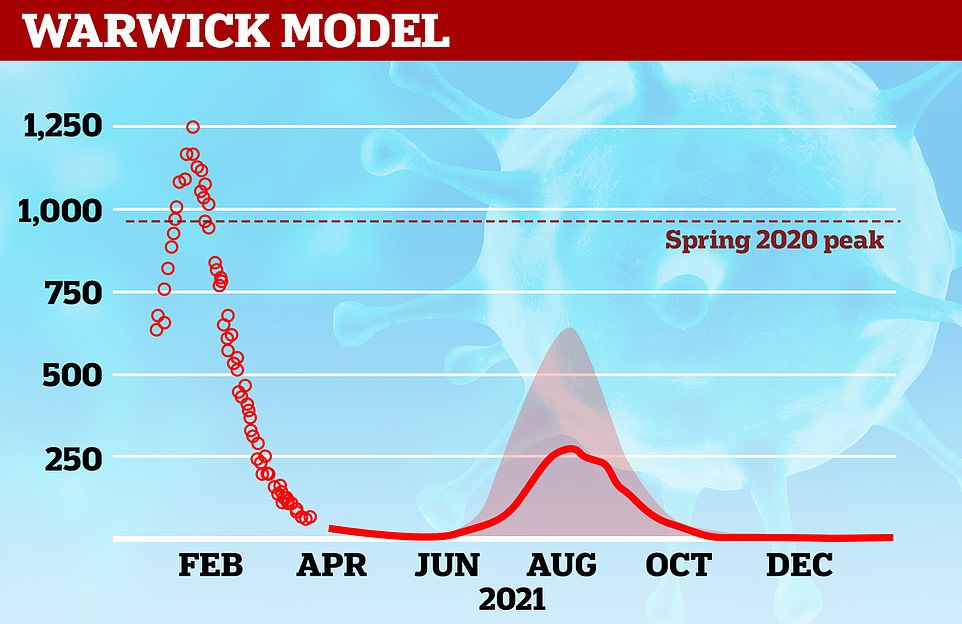 Modelling by Warwick University – which also feeds into SAGE – has deaths peaking at between 250 and 750 in August, but they have already been forced to radically revise their death toll downwards after their assumptions about vaccine efficacy proved too pessimistic. The model was based on an R rate of around 3 and vaccine coverage of 90 per cent of adults under-50 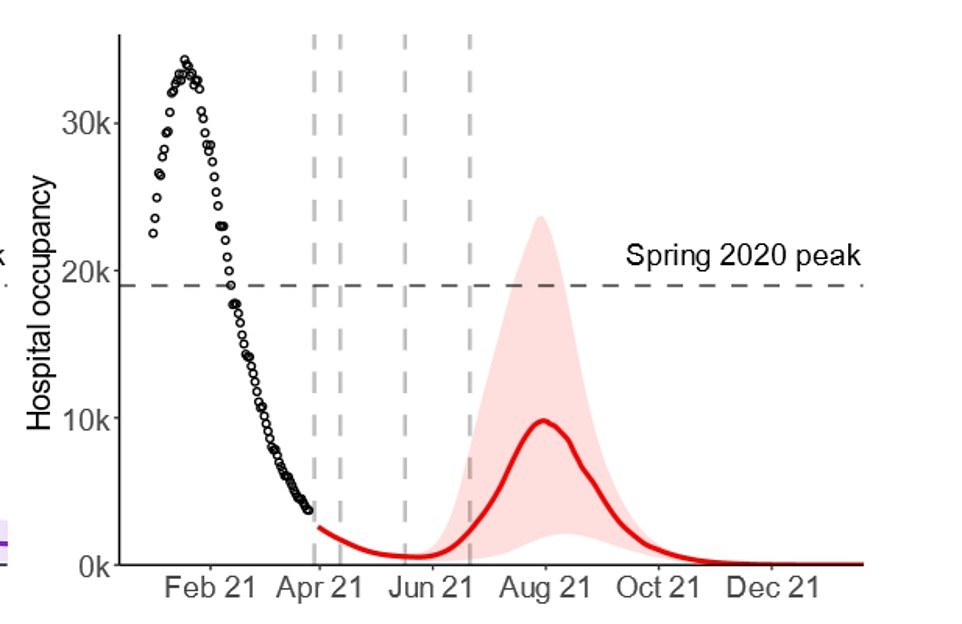 WARWICK’S HOSPITALISATIONS: Warwick’s modelling of hospital rates shows that the country can expect about 10,000 patients in beds by the autumn, a third of the levels at this winter’s peak and half of occupancy rates last spring

Professor Spector told MailOnline: ‘They seem to be picking the most pessimistic of the assumptions each time in order to come up with the worst case scenario, perhaps to avoid complacency.

‘They might want to warn people that if we just relax our guard this is what could happen, that’s why a lot of language is written like that [pessimistic].

‘I’m certainly not arguing we should totally relax right now but I think the vaccine is doing better than they are saying… and they are just painting a much bleaker scenario than the reality.’

‘I’m hoping we won’t need any further lockdowns. I think we’re going to have a very relaxed summer and I think we’ll see some outbreaks during the autumn, which will pick up at the end of year. But we’re not going to see anything like we’ve seen previously.’

Even SAGE’s own scientists are starting to backtrack on the pessimistic models released yesterday. LSHTM infectious diseases expert Professor Graham Medley, who is also a chief modeller at SAGE subgroup SPI-M, told MailOnline today: ‘As we unlock and contact rates increase, so the the virus has more chance to spread.

‘Three different models have been used to project forwards to see what impact this will have. Each of them show that there is likely to be another wave of the epidemic – the question is how big this wave will be.

‘There is real uncertainty in this largely because we do not know exactly how effective the vaccines will be in two or three months time.

‘If things go badly, then the wave could be large, but if things go well, it could be much smaller than we have seen before. It is not possible at this stage to say which is more likely.’

Earlier he told BBC Radio 4’s Today programme this morning: ‘It really just depends upon the impact of vaccination, particularly on transmission, so whether or not people can get infected and pass the virus on.

‘And we just don’t know that. The vaccine hasn’t been around in people in the real world… only in December it started… so we don’t know what effect it’s going to have in three, four months’ time and that’s the real unknown. So it’s a question of genuine uncertainty.

‘The only thing we can be sure of is that we don’t know exactly what is going to happen but we do know that, because the vaccine isn’t 100 per cent effective, there will be some transmission, and there will be some breakthrough of immunity.’

Asked if mask-wearing and social distancing will have to continue past the end of June 21, he said: ‘Yes, so the amount of infection and death is dependent upon not only the vaccine, but also what it is that people actually do.

‘And then that’s related to the policies that are put in place. Both of those are uncertain – both the policies but also then how people behave with the policies – so it’s quite likely that we will have to see some kind of measures to reduce transmission for a long time.’

It’s unclear whether LSHTM factored in people who are protected against Covid due to prior infection, which is thought to be up to 30 per cent of the population.

Dr Simon Clarke, a microbiologist at Reading University, took issue with the lack of transparency in the models, telling MailOnline: ‘They don’t fully explain how they got those numbers.

‘The problem with these SAGE documents, and I’ve been saying this for the past year, is that they are not actual evidence. Even in GCSE maths you’re taught to show your workings and we don’t get that from these papers.’

Modelling by Warwick University – which also feeds into SAGE – had deaths peaking at between 250 and 750 in August, depending on the impact of each major relaxation of lockdown on case numbers.

But the Warwick team has already been forced to radically revise its death toll downwards after earlier assumptions about vaccine efficacy and uptake in February proved too pessimistic.

Most scientists told MailOnline the most realistic assumptions were those made by the team at Imperial College London. The team, which includes the notoriously gloomy ‘Professor Lockdown’ Neil Ferguson, said daily deaths are most likely to stay below 100 even in the event of a resurgence.

And thanks to the effects of vaccines, the team’s most-likely scenario also estimated that coronavirus patients will take up 5,000 hospital beds during any future spike, far lower than the 30,000 occupied during the darkest days of January.

Imperial’s central assumptions project another 15,700 deaths from the disease from now until June 2022. For comparison, there have been at least 126,000 Covid fatalities during the pandemic so far.

GTA 5 Is Coming Back to Xbox Game Pass This Week