A five-year-old boy who was the sole survivor in a cable car crash which killed 14, including both his parents, asked: ‘Where are mum and dad?’ when he woke up in hospital.

Israeli Eitan Biran miraculously escaped alive from the tragedy in the Alps, but his mother and father, younger brother and great-grandparents were all killed.

The brave boy has been in intensive care for most of the week but is now breathing independently, though he still finds speaking to be difficult.

When he woke to see his aunt Aya, 41, by his bedside at the Regine Margherita Children’s Hospital in Turin, he first said: ‘I have a sore throat,’ before asking where he was and why she was there.

It is not clear if he has been told the heartbreaking news that mother Tal, 26, father Amit, 30, little brother Tom, two, and great grandparents Yitzhak Cohen, 81, and Barbara Koninsky, 71, are all dead.

The hospital’s general manager, Giovanni La Valle, told BILD: ‘Sometimes Eitan asks about his parents, but whatever: his aunt is always with him.’

It comes as it emerged that the Italian cable car boss, accused with two others of deactivating the braking system that could have saved 14 lives on Sunday, is facing 30 years in prison.

Luigi Nerini, 56, head of Ferrovie del Mottarone, the firm which manages the cable car, was arrested on Wednesday along with two colleagues Gabriele Tadini and Enrico Perocchio.

Nerini is awaiting indictment in a cell at Verbania prison but may face 14 manslaughter counts, which could see him jailed for 30 years, according to the German paper.

Tadini, a technician, meanwhile told magistrates on Thursday: ‘It’s all my fault,’ La Republicca reported, explaining that he had deliberately tampered with the brakes to avoid delays following a malfunction.

But investigators say this deactivation of the brakes – that could have stopped the car flying backwards when the cable snapped – was approved by his senior colleagues Nerini and Perocchio.

The investigators allege that the two managers ‘had been repeatedly informed and both Perocchio and Nerini endorsed this choice.’ 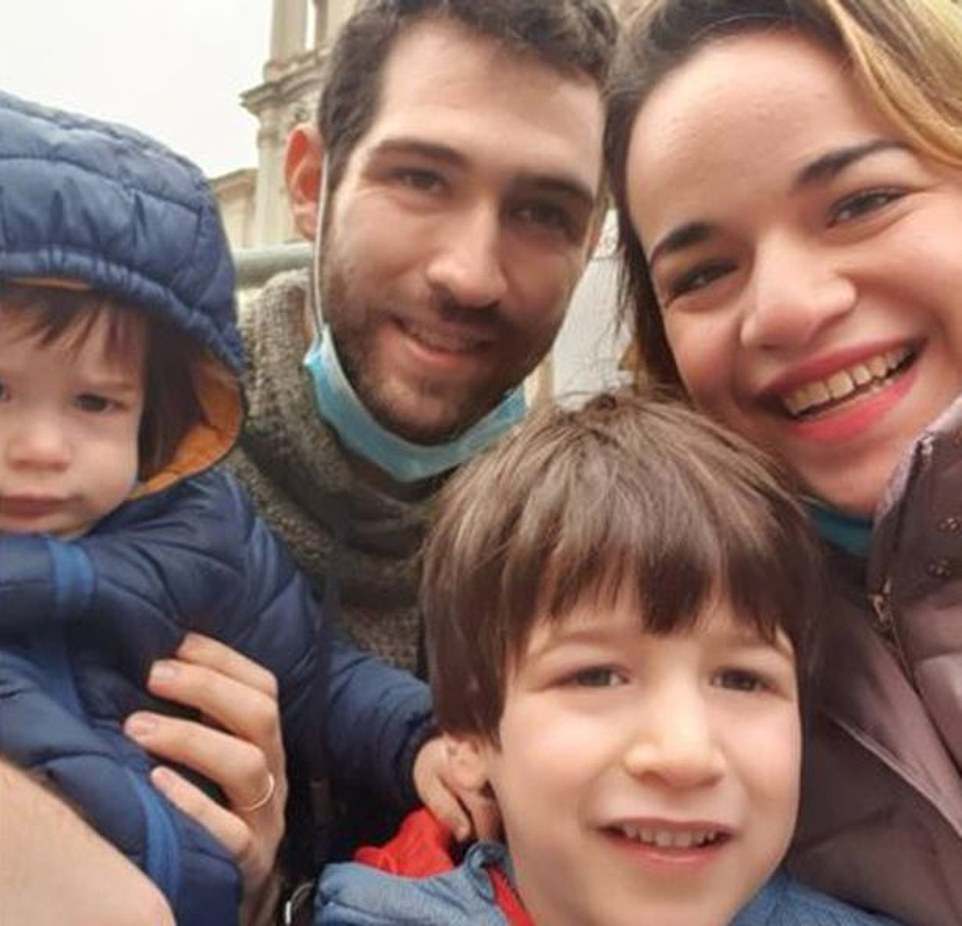 Israeli Eitan Biran miraculously escaped alive from the tragedy in the Alps, but his mother and father, younger brother and great-grandparents were all killed 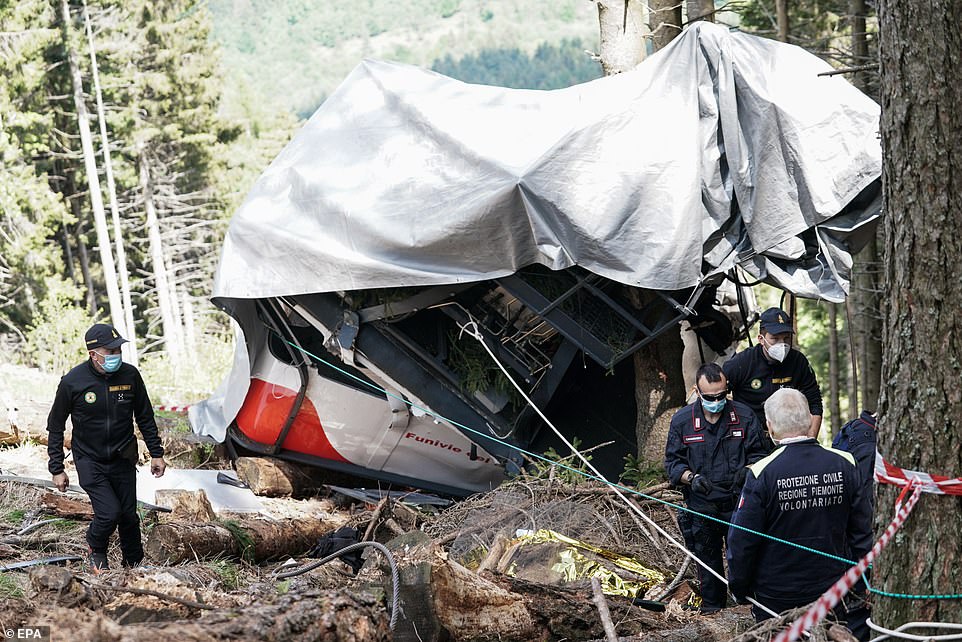 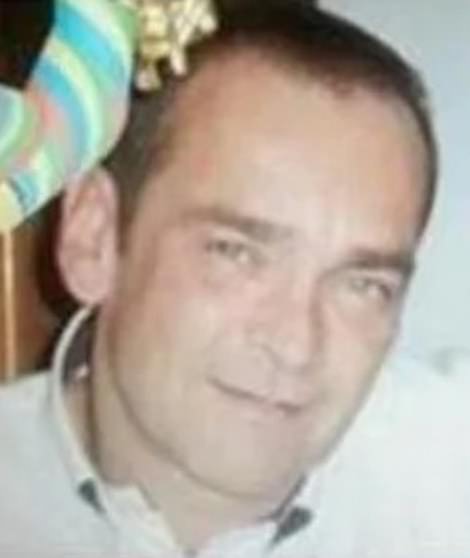 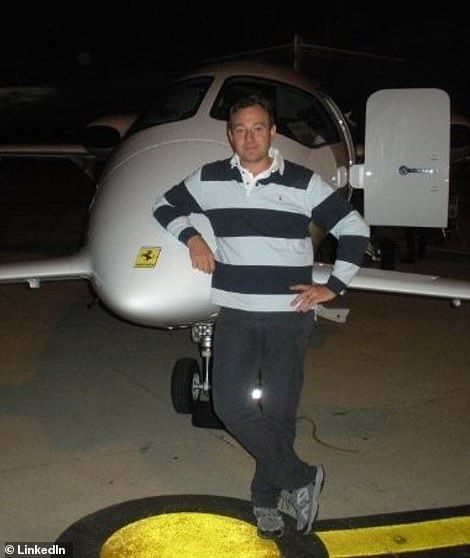 Luigi Nerini, 56, (left) head of Ferrovie del Mottarone, the firm which manages the cable car was arrested on Wednesday along with two colleagues Gabriele Tadini and Enrico Perocchio (right) 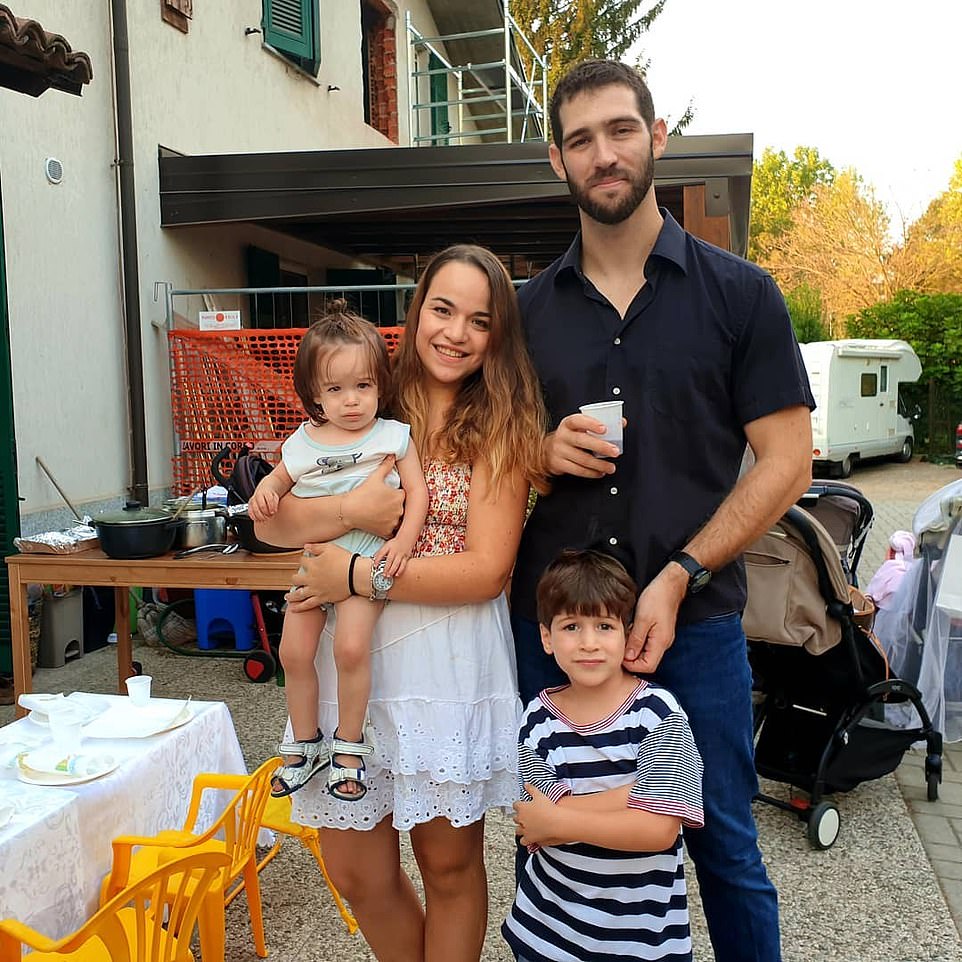 Amit Biran, 30 (left), his wife Tal, 26 (right), and their two-year-old son Tom were among those killed in the cable car crash in Italy. Eldest son Eitan (bottom right), five, is in hospital 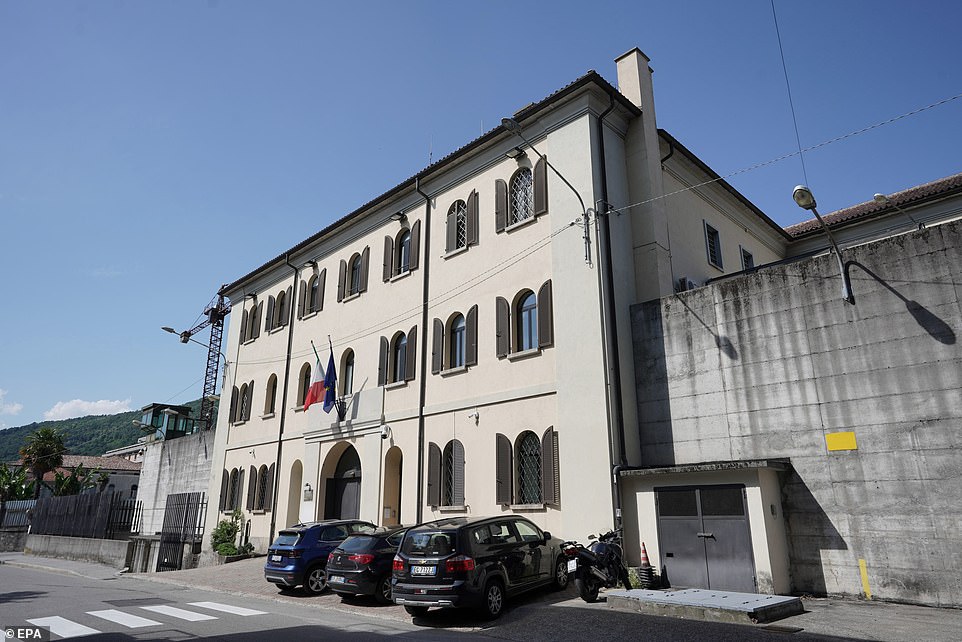 The prison where the three suspects are being held in Verbania 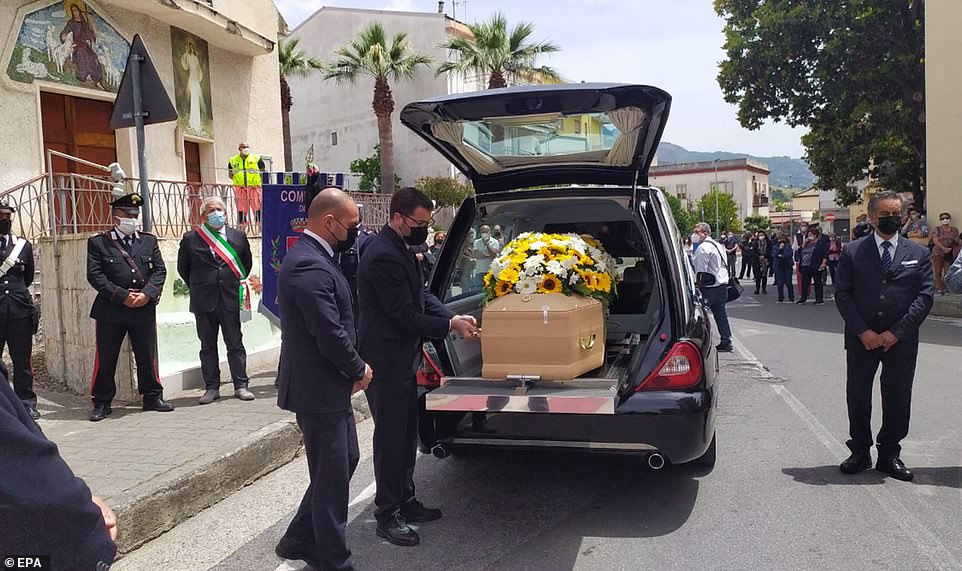 The coffin with the body of Serena Cosentino, one of the cable car accident victims, arrives on the hearse in the church of Gesu Buon Pastore where the funeral will be officiated in Diamante, Cosenza, on Thursday 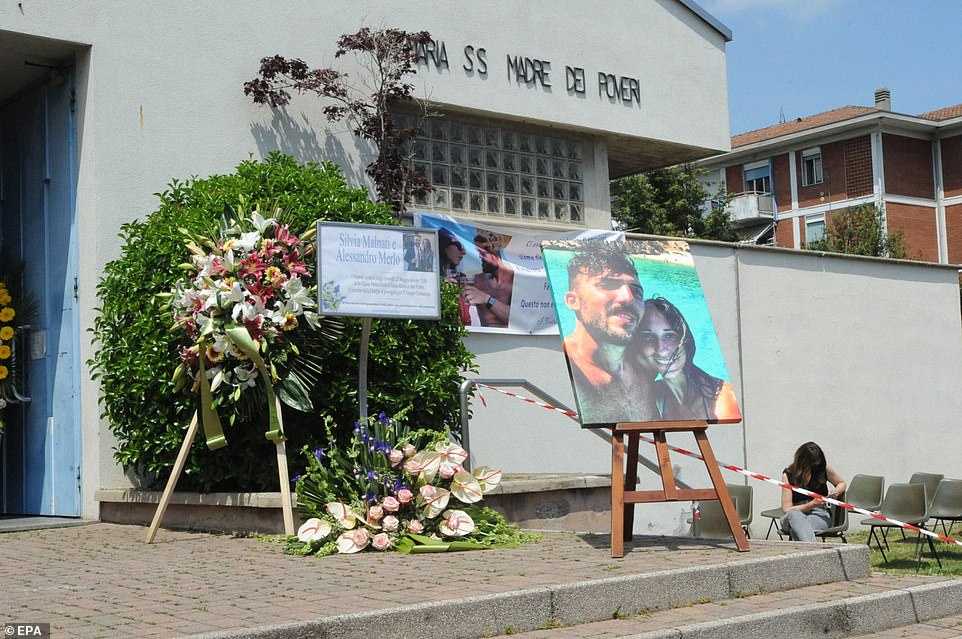 A picture of Alessandro Merlo and Silvia Malnati, a young engaged couple who died in the tragedy at the Mottarone cable car, during their funeral in Varese on Thursday

‘It was not an occasional omission or forgetfulness. It was a conscious decision to disarm… to deactivate this emergency system in order to remedy what we have been told were problems, technical problems that were occurring on the line,’ she added.

‘To avoid further interruptions in the service, they chose to leave in ‘the fork’, which prevents the emergency brake from working,’ said Cicognani.

He claimed all three men admitted what had happened.

The apparatus known as the fork had been inserted ‘several times’, said Bossi, suggesting the cable car had been unsafe for some time.

‘Certainly Sunday was not the first day and this has been admitted,’ Bossi told journalists.

Eitan suffered thoracic and abdominal trauma, as well as fractures to his limbs, during the tragic incident last week.

Today, his psychologist, Marina Bertolotti, explained the delicate nature of this stage of the tragedy.

She said: ‘We don’t ask, but we have to be able to respond to his questions. To find the right answers, we need to work with his family. If he screams, you have to intervene. But otherwise we have to first see what his psychological trauma is.’ 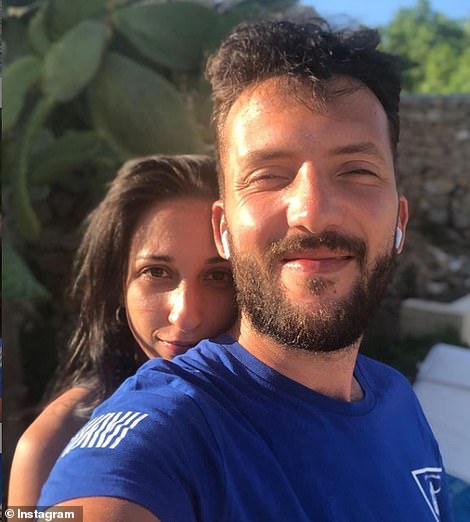 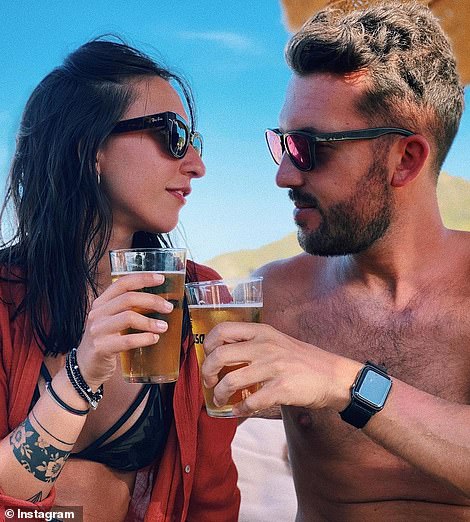 Alessandro Merlo and Silvia Malnati, 29 and 27, also died in the tragedy. Friends said the couple had been engaged for 10 years but were planning to marry – prompted by Silvia’s recent graduation from university 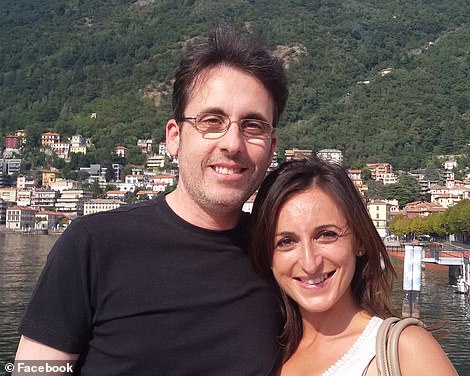 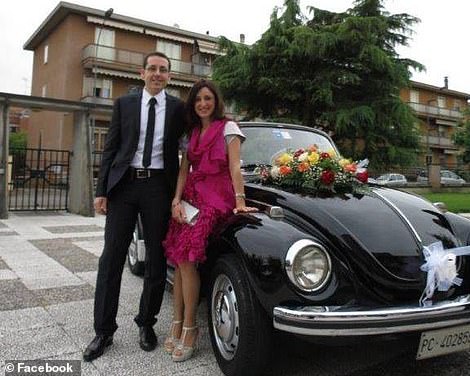 Angelo Vito Gasparro, 45, wife Roberta Pistolato (together left and right), died when the cable car plunged 65ft during a trip to the mountains to celebrate Roberta’s 40th birthday 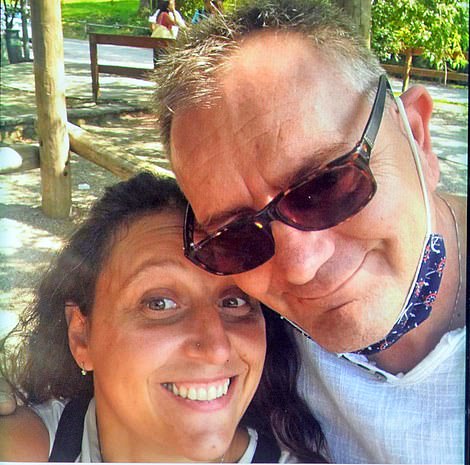 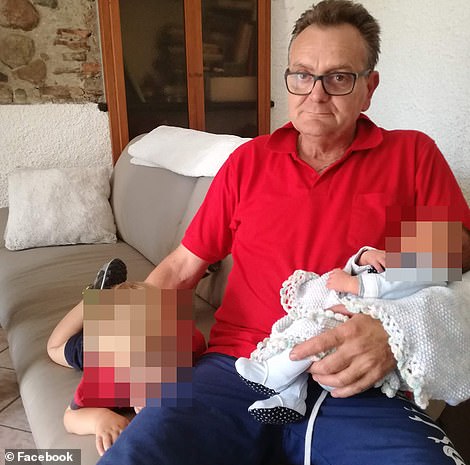 Vittorio Zorloni and Elisabetta Persanini (together left, and Vittorio pictured right) were also killed in the accident, along with their five-year-old son Mattia. The couple were engaged and due to be married next month, Italian media reported 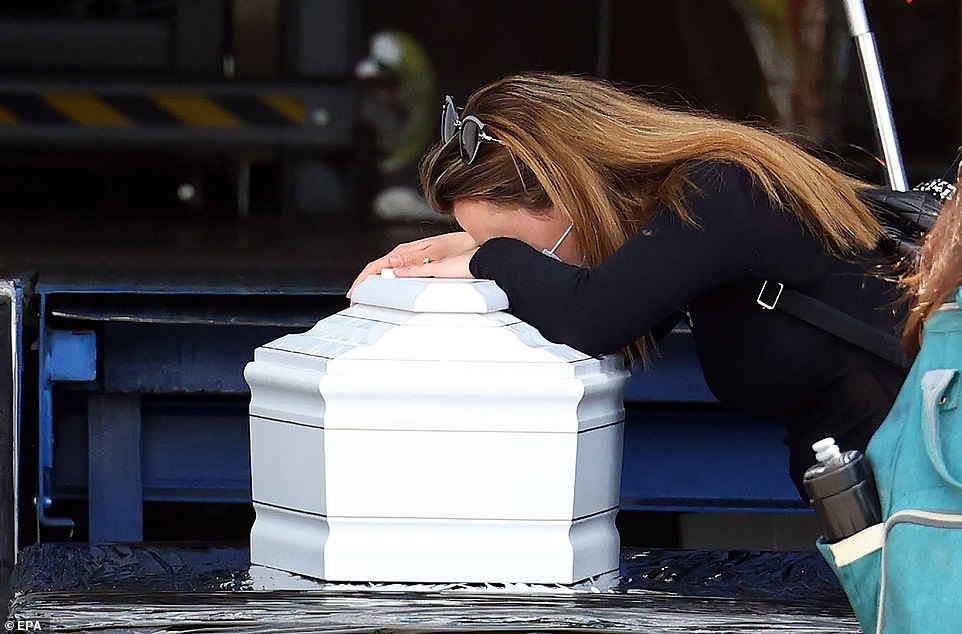 The bodies of his mother, Tal, father, Amit, younger brother Tom and his great-grandparents were lined up at the Milan Malpensa airport on Wednesday ahead of their repatriation to Israel.

He had earlier been visited by the Mayor of Stresa Marcella Severino who has called the crash her town’s 9/11.

‘This is September 11 for Stresa,’ the mayor said on Wednesday evening as a message from the Pope was relayed by the local priest during a service for the victims.

‘The Holy Father thinks with emotion of so many lives tragically broken … and sends his prayers to the victims and for little Eitan,’ Father Gianluca Villa told the congregation which included firefighters, nurses and carabinieri who rushed to the Mottarone mountain in the Alps after the cable car fell.

Rescuers found five bodies still inside the cable car, with the others strewn outside. 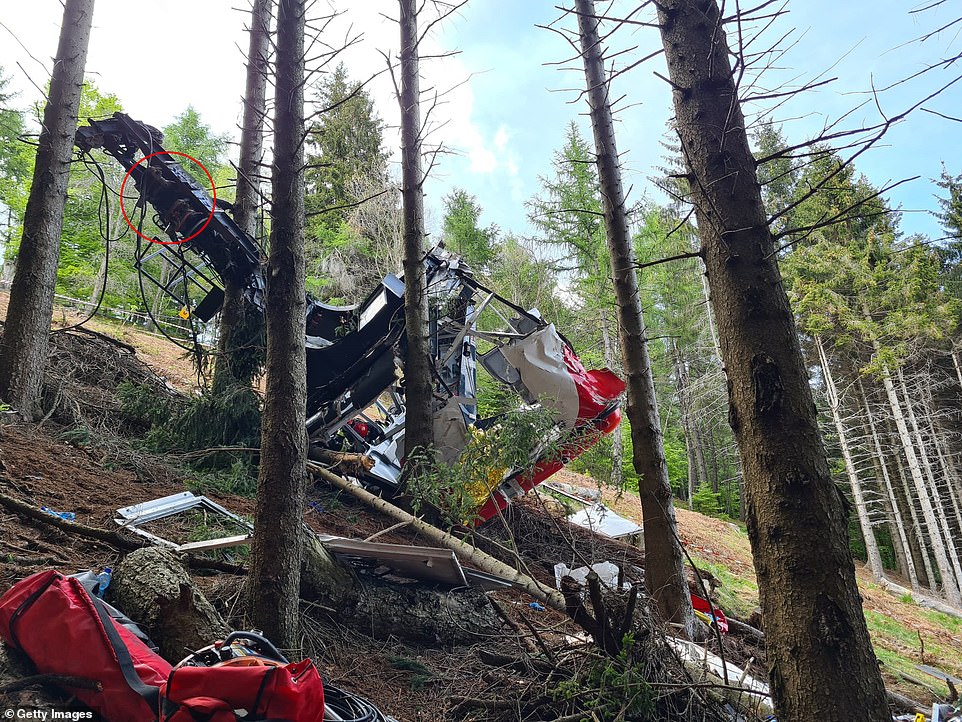 Engineers ‘tampered with’ the braking system (circled) on the Italian cable car as part of a botched fix in order to avoid delays, prosecutors said 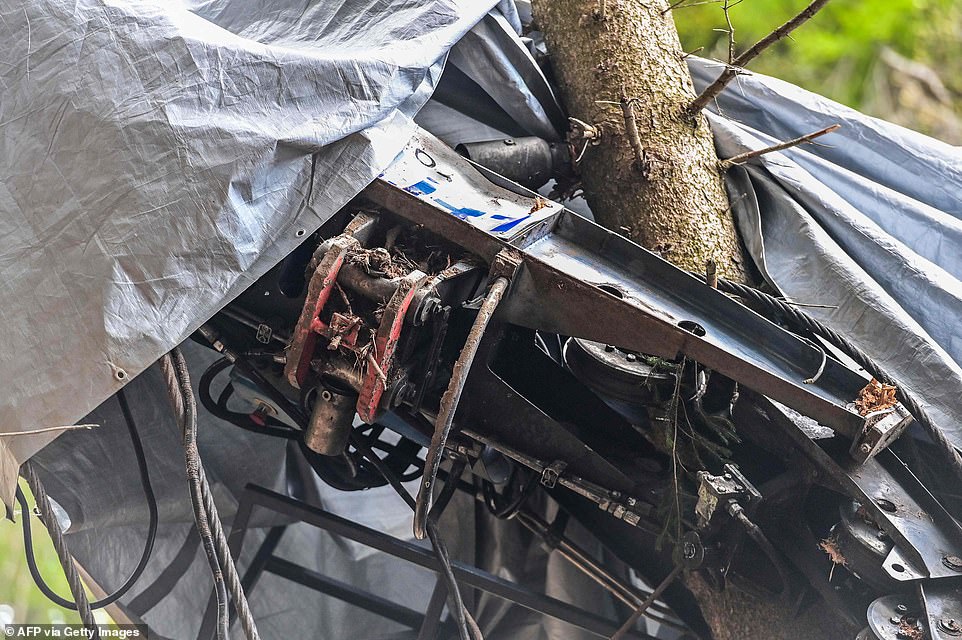 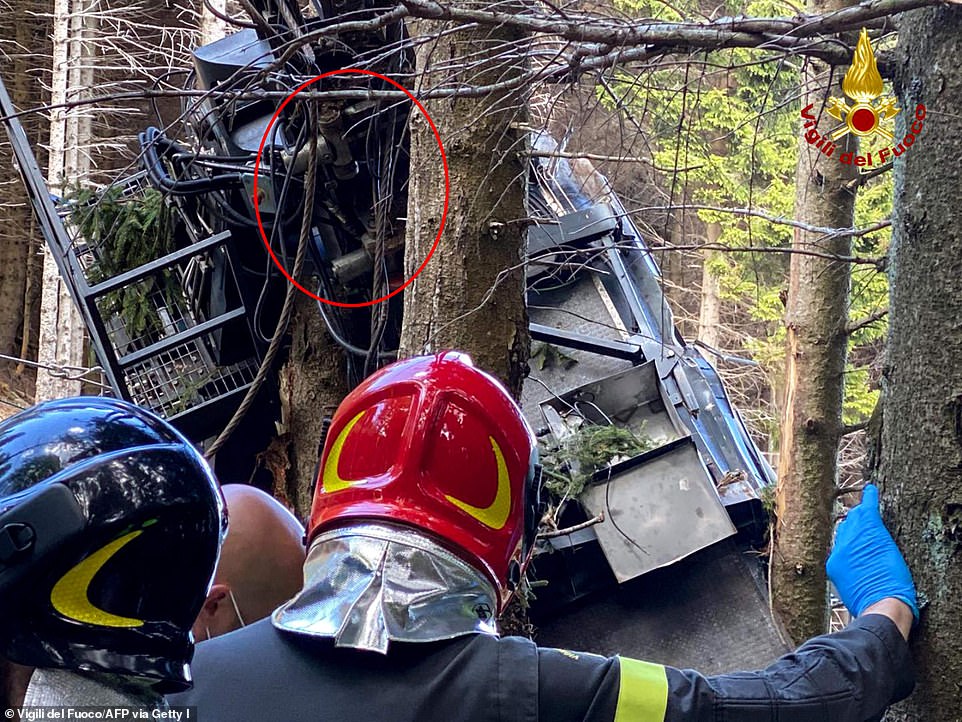 Since the cable car reopened on April 26 after lockdown, technicians on the Ferrovie del Mottarone had noticed faults on the braking system (circled) 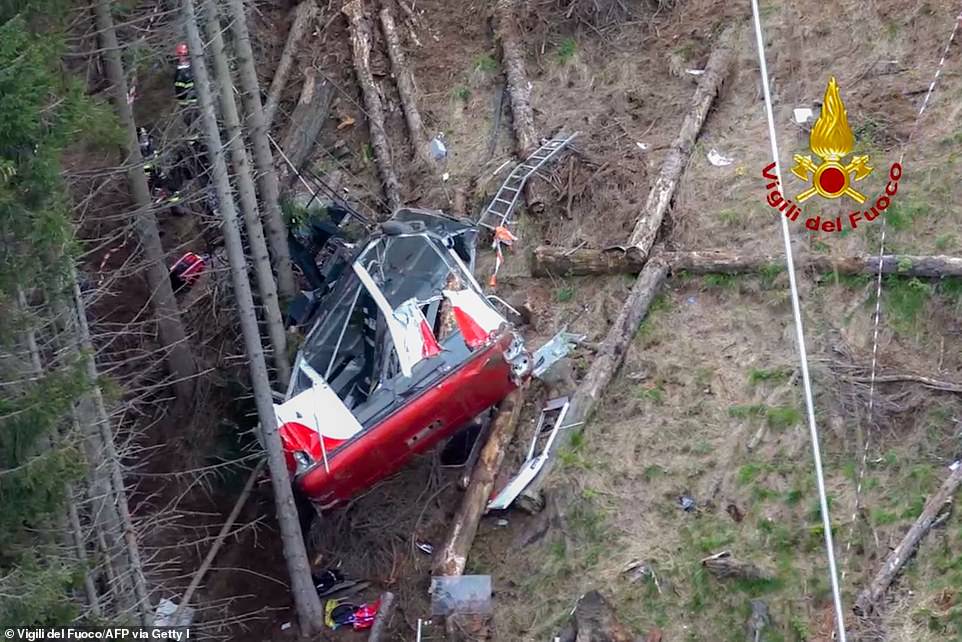 The cable car hit a pylon, then hit the ground, tumbling down the mountain for about 500 metres (1,600 feet), before coming to a stop, according to news reports 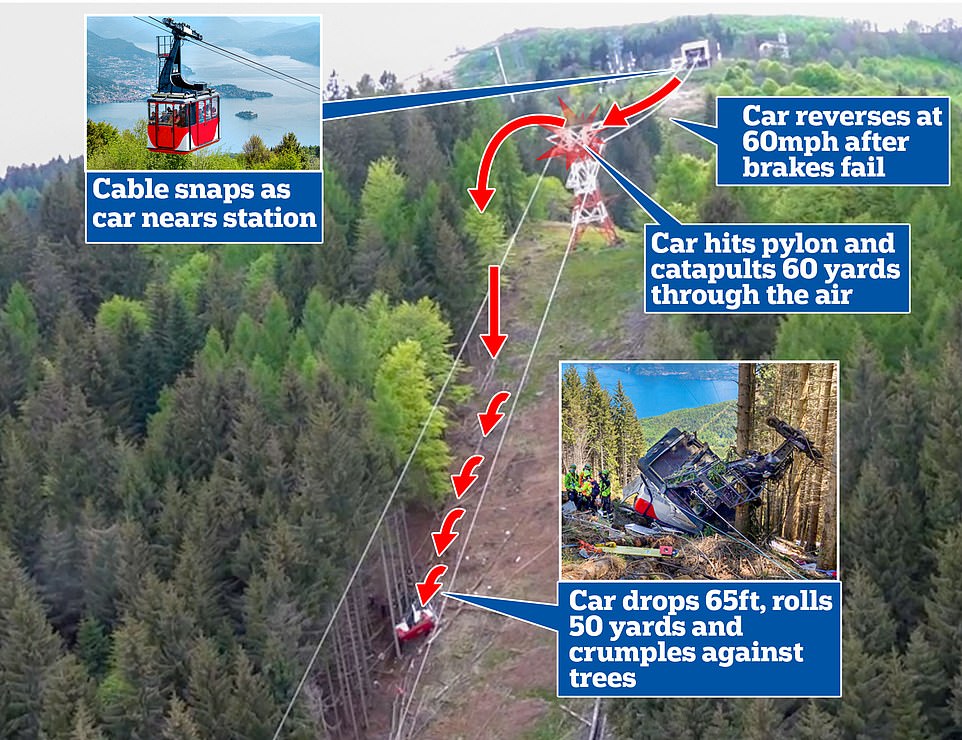 The first funerals of some of the victims took place in both Italy and Israel on Thursday.

Sunday’s crash was the first fatal incident involving a cable car in Italy since 1998, when a low-flying US military jet severed a cable at a ski resort, killing 20 people.

It came at the start of the country’s much-anticipated reopening to tourists after coronavirus closures.

Car shopping this Memorial Day? The chip shortage is pushing up prices, limiting some models

SARAH VINE: How laughable for them to lecture the Queen on duty. She wrote the book

The primary reserving pictures of Derek Chauvin, the disgraced Minneapolis police officer sentenced to greater than...