The White House wouldn’t say when President Joe Biden will get his physical, but press secretary Jen Psaki said that ‘absolutely’ a comprehensive health report would be released.

‘I don’t have a timeline but absolutely we will do that and I will check and see when he is due to go back to the doctor,’ she said during Monday’s press briefing.

Seventy-eight-year-old Biden is the country’s oldest president and last released health records in December 2019, in the weeks preceding the Democrats’ first caucuses and primaries. 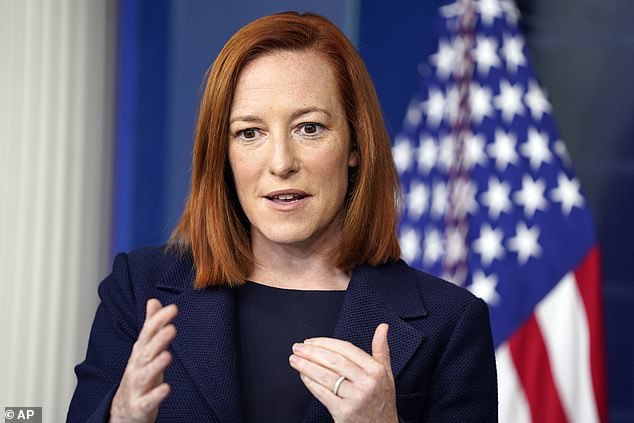 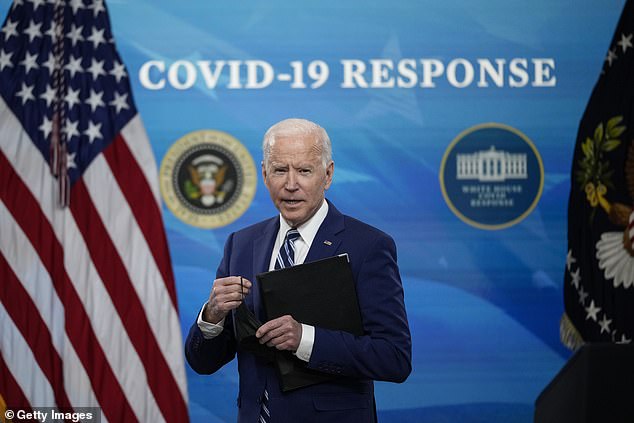 At 78, President Joe Biden is the oldest American president coming into office, leading to a number of questions about his health 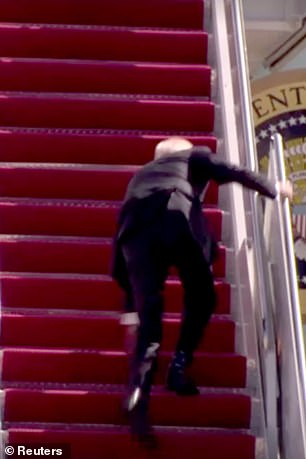 President Joe Biden fell up Air Force One’s stairs in an incident earlier this month (left) after hurting his foot in December (right), while playing with his dog, Champ

Since then, he’s suffered from hairline fractures in his foot in December 2020, when he misstepped playing with his dog, Major.

Biden also fell up the stairs of Air Force One earlier this month, which White House officials blamed on wind and the stairs being ‘tricky.’

Political detractors, including former President Donald Trump, saw the fall and stoked speculation that something was amiss with his health.

Trump didn’t have his first official physical until a year into his term.

During the 2016 campaign, Trump dictated a letter to his primary care physician, the late Dr. Harold Bornstein, bragging that he would be the ‘healthiest individual’ ever elected to the presidency.

In January 2018, then White House Dr. Ronny Jackson said Trump was in ‘excellent’ health. He benefited from abstaining from tobacco and alcohol, but had high cholesterol and the doctor spoke to him about his diet, exercising more and weight loss.

Trump was known for his steady diet of Diet Cokes, red meat and ice cream.

Trump critics also believed he could be showing signs of mental unfitness.

The ex-president made a mysterious trip to Walter Reed Medical Center in November 2019, which the White House said was for a ‘quick exam and labs,’ part of that year’s physical.

He returned to Walter Reed in October 2020 during the biggest health crisis he faced during his one-term, Trump’s diagnosis with COVID-19, which dropped his blood oxygen levels to unsafe levels, according to a New York Times report.

In the first case, the White House never released a more specific reason for Trump’s 2019 trip.

In the second, White House officials still haven’t said when the last time was Trump tested negative for COVID-19 before he tested positive.

In the days running up to his COVID diagnosis, Trump participated in the first presidential debate with Biden and attended events and rallies.

As The New York Times reported in the run-up to Trump’s first physical’s release, there is no precedent to follow on what health information is given out by the White House and the medical patient, in this case Biden, has to agree to what gets put out publicly.