Who are Asda’s new owners the Issa brothers? 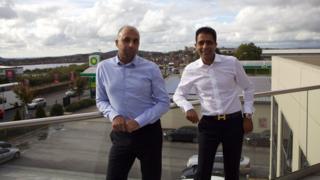 Two UK billionaire brothers – who made their money in petrol stations – have succeeded in buying UK supermarket giant Asda from US owners Walmart.

Zuber and Mohsin Issa, 48 and 49, started their business with a single petrol forecourt in Bury, Greater Manchester, in 2001.

Now their business, EG Group, owns more than 5,200 petrol stations, mainly in Europe and the US, and employs more than 33,000 people.

The speed of growth marks out the brothers as “remarkable entrepreneurs”, says Brian Madderson, chairman of the Petrol Retailers Association (PRA), of which EG Group is a member.

The expansion came as the major oil companies sold off or closed their High Street petrol outlets to concentrate on production and refining.

It was a “huge opportunity,” Mr Madderson said.

While motorists have been able to pick up a fizzy drink or a pack of gum with their fuel for decades, they are now being offered fast food, takeaway coffee and groceries.

Walmart favoured the pair of entrepreneurs over a more corporate buyer

One of their newest sites, near their hometown of Blackburn, is a four-acre service station and features a drive-through KFC, Starbucks and Greggs, as well as a Spar convenience store, a BP-branded petrol station and electric charging space.

Said Mr Madderson: “When the rest of the market was quaking in their boots at the tough stance of the supermarkets, the brothers said: ‘OK, if people want cheap petrol and can afford the time to find a supermarket, good for them, we will focus on high quality for motorists on the move’.”

Industry insiders describe the brothers as softly spoken and modest. At one industry awards ceremony several years ago, the brothers were present but were said to be too shy to claim their award on stage.

People who know them say that part of their success is in remaining curious about competitors and being willing to learn and pick up new ideas.

The brothers own 50% of their enterprise between them, split equally, with the other half owned by TDR Capital, an €8bn (£7.3bn) investment firm which owns David Lloyd gyms.

The Sunday Times values their fortune at £3.56bn.

They donate 2.5% of their wealth each year to their own charitable foundation, which funds projects in the UK and abroad. In 2019 they donated £20m.

They courted controversy in their home town when they bought eight homes, demolished them and began building five mansions, raising the ire of neighbours, the Lancashire Telegraph has reported. In 2017, they reportedly bought a £25m home in London’s upmarket Knightsbridge.

For the Issas’s purchase of Asda, a chunk of the bid is likely to have come from their own money, believes independent retail analyst Richard Hyman.

“The world has become too corporate,” said Mr Hyman. “This is the kind of economy and business climate where there’s not enough entrepreneurialism.”

As yet specific details about the Walmart purchase have still to be revealed.

Mr Hyman cautions that while Asda can be improved by an enterprising eye, there is no “massive prize” in buying a big supermarket.

“This sector is going to get more intensely competitive than it’s ever been,” he says, with Lidl, Aldi, B&M – which plans to open 45 new stores this year – and Home Bargains all taking custom from them.

In the UK, EG Group has 386 sites, making it the second-biggest independent petrol retailer behind Motor Fuels Group, which has more than 900 locations, according to data from the PRA.

The market in the UK totals about 8,350 forecourts. About 1,500 are operated by supermarkets, with another 1,500 owned by large oil firms such as Shell and BP. The remainder are owned by independents.

In 2019, EG Group reported sales of €20bn (£18bn), up from €12bn a year before. While fuel accounted for €16bn of sales, the business is geared towards adding on other sales, from brands including including Subway, Burger King and French supermarket Carrefour. Borrowing costs on €8bn of debt pushed the firm into a fiscal loss for the year, of €496m.

The firm has about £9 of debt for every £1 of cash earnings, says Azhar Hussain, head of global credit at Royal London Asset Management. Most companies would have £3-6 of debt for each pound earned before eyebrows are raised and questions are asked about repayment, he said.

But the businesses EG Group has bought with its borrowings are making plenty of cash, which appears to be putting lenders at ease, he said. “They are a high-risk company with a lot of debt and therefore their strategy is absolutely key,” he said. “But it looks like that strategy is working.”

Although more people are buying electric cars, petrol and diesel still dominate the market. Still, the company has said on its website that it will “capitalise” on the demand for new fuels. The company’s large forecourts provide good space for fast electric charging, it says.