Europe could face a third wave of coronavirus in early 2021 because of its ‘incomplete’ response to the pandemic, the WHO fears.

Governments in Europe ‘missed the chance to build up the necessary infrastructure during the summer months, after they brought the first wave under control,’ WHO envoy David Nabarro told Swiss newspapers.

‘Now we have the second wave. If they don’t build the necessary infrastructure, we’ll have a third wave early next year,’ said Nabarro.

While vaccines are on the horizon, Europe is still in the grip of a second wave which has caused unprecedented numbers of infections and brought daily deaths back into the hundreds in the major economies of Western Europe. 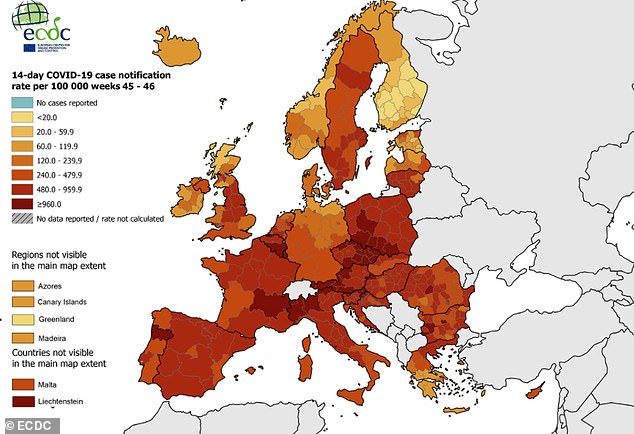 Europe is still in the grip of the second wave of Covid-19, with harder-hit countries and regions shown in darker red on this map

Nabarro voiced concern Switzerland’s move to allow skiing – with masks required in ski lifts – while other Alpine nations like Austria have shut down resorts.

The British public health expert warned that Switzerland could reach a ‘very high level of sicknesses and deaths’.

‘Once the infection rates sink, and they will sink, then we can be as free as we want,’ Nabarro said. ‘But right now? Should ski resorts open? Under what conditions?’

By contrast, Nabarro lauded the response of Asian countries such as South Korea, where infections are now relatively low.

‘People are fully engaged, they take on behaviours that make it difficult for the virus,’ he said.

‘They keep their distance, wear masks, isolate when they’re sick, wash hands and surfaces. They protect the most endangered groups.’

‘You must wait until case numbers are low and stay low,’ he said. ‘Europe’s reaction was incomplete.’

Europe is currently adding more than 200,000 new cases per day while deaths are in the thousands, surpassing the peaks of March and April in some countries.

Italy, the first Western country to be battered by the pandemic in the spring, is now suffering around 650 deaths per day, a figure last seen in early April. 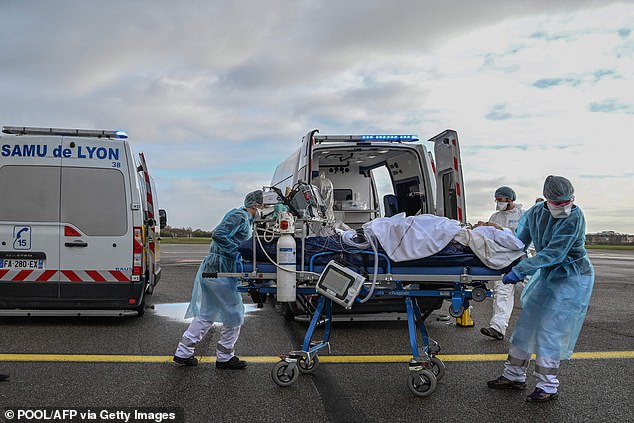 Medical staff take a patient to a waiting aircraft to be transported to another hospital in France, which is once again seeing hundreds of daily deaths linked to Covid-19

Daily deaths are around 600 in France and 260 in Spain, although cases have shown signs of decline in both countries.

France and Britain are both under month-long national lockdowns which ministers are preparing to ease in the coming weeks.

In Germany, where cases have stalled but hardly fallen, Angela Merkel has been pushing for state leaders to agree to tougher restrictions.

Merkel, who marked 15 years in power on Sunday, is due to hold another round of discussion with regional premiers on Wednesday.

Protesters demonstrated against lockdown rules in Berlin at the weekend in a rally that drew in far-left activists, conspiracy theorists and right-wing extremists.

Encouraging results from several vaccine trials have raised hopes of a decisive shift in the battle against Covid-19, but the roll-out is expected to take months.

Dr Michael Tildesley, a member of the UK’s scientific advisory panel SAGE, said social distancing needed to continue until the vaccine is delivered.

‘There is good news – the cavalry is appearing on the horizon – but we need to keep incidence as low as possible. We need to keep observing our social distancing,’ he said.

Today, the Oxford University vaccine developers announced that their jab offered up to 90 per cent protection with the right dosage.

Another pattern of dosage showed 62 per cent efficacy, giving a combined figure of 70 per cent.

Vaccines developed by Pfizer, BioNTech and Moderna have also shown protection levels of 90 per cent or more in their trial results.

Experts say the Oxford vaccine is easier to store and distribute than the other candidates which have shown good results so far.