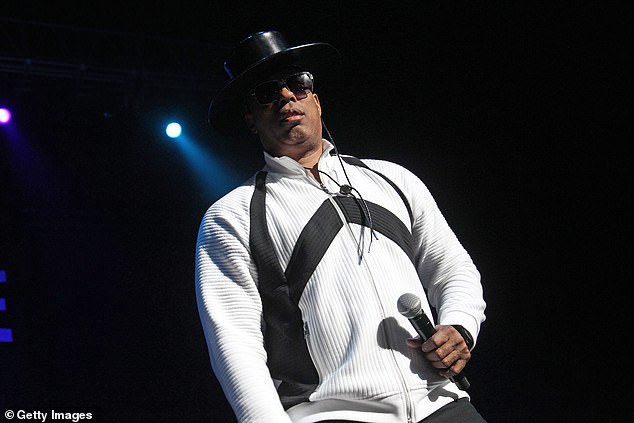 His death was announced Wednesday by Roots’ drummer Questlove who remembered Fletcher as ‘a pivotal member of one of the most legendary groups in hip hop’.

It was later confirmed to Variety by Whodini’s Grand Master Dee.

The cause of death is as yet unknown.

Fletcher, who was known for his trademark Zorro hat, had been living in the Atlanta area, according to TMZ.

Born on June 7, 1964, he founded Whodini in Brooklyn alongside fellow rapper Jalil Hutchins in 1982 and signed with the influential Jive Records shortly after

The duo was joined by Drew ‘DJ Grandmaster Dee’ Carter in 1986.

They were famed for hits such as ‘Freaks Come Out at Night,’ ‘Friends’ and ‘The Haunted House of Rock’ and known for being among the earliest acts to combine rap with R&B.

Their debut ‘Magic’s Wand’ was the first hip sop song with a video, according to The Grio.

The group was also the first to perform with b-boy dancers and are credited with helping to create the New Jack Swing genre.

Whodini was considered an integral part of the early 1980s NYC hip hop scene before attaining a national following.

In 2018, they recieved the Hip Hop Icon Award at the 3rd Annual Black Music Honors.

Their work has been sampled hundreds of times by artists including Kanye West, Nas, 2Pac, Dr. Dre, Eazy-E and Ice Cube. ‘Friends’ is considered one of the most sampled songs in hip-hop.

Whodini was considered an integral part of the early 1980s NYC hip hop scene before attaining a national following. Pictured, Jalil and Ecstasy (right) performing in Chicago in 1987

The group was the first to perform with b-boy dancers and are credited with helping to create the New Jack Swing genre.Pictured, Whodini and Fletcher (center) performing in 1987

He was among those to pay tribute to Fletcher on Wednesday, thanking the rapper for ‘showing us how to do it’.

Chuck D of Public Enemy called Fletcher ‘my brother’ in a tribute posted on the group’s Twitter account.

‘Been on the phone all morning. Ecstasy was one of the greatest to ever rock a microphone,’ he wrote.

‘Whodini broke barriers, set trends and looked out for us as we came up. PE returned the favor we sampled Whodini, and brought them on tour. We had a real brotherhood.

‘Looking out for each other. “EX” Rest In Power King. Know you will live on and be remembered. We will make sure.

Ice Cube, who has sampled Whodini, was among those paying tribute to Fletcher

Questlove referred to John ‘Ectasy’ Fletcher as a ‘pioneer’

‘1987 I entered the @Defjam tour w PE. I tended to be nervous looking at 15000 fans in front of me every night,’ he added on his personal account.

‘There were 2 MCS that directly mentored my calm that summer. 1 was @RealDougEFresh the other was Ecstacy of Whodini. Always there to reassure w advice tips.’

Questlove called Fletcher a ‘pioneer’ after making the first announcement about his death.

‘RIP to Ecstasy from http://Whodini.one of the most under appreciated voices in hip hop. Too many hits! Condolences to his fam,’ added Tribe Called Quest rapper rapper Q-Tip.

Jermaine Dupri, who produced Whodini’s sixth album Six and started his own career as a dancer with the group when he was twelve years old, wrote a heartfelt tribute

‘My God, this one hurts me so bad,I can’t even believe I’m posting this,Ex you know I love you,’ wrote rapper Jermaine Dupri, who produced Whodini’s sixth album Six and started his own career as a dancer with the group when he was twelve years old, appearing the their video for ‘Freaks Come Out at Night’.

‘Just got the sad news, Ecstasy of #Whodini passed away today.. Thank you for the music of my youth,’ said a tribute from comedian Loni Love.

‘I always loved the Zorro hat!!! Condolences to his family.’

Ethiopian Human Rights Commission: More than 100 were killed in an attack in Benishangul-Gomez