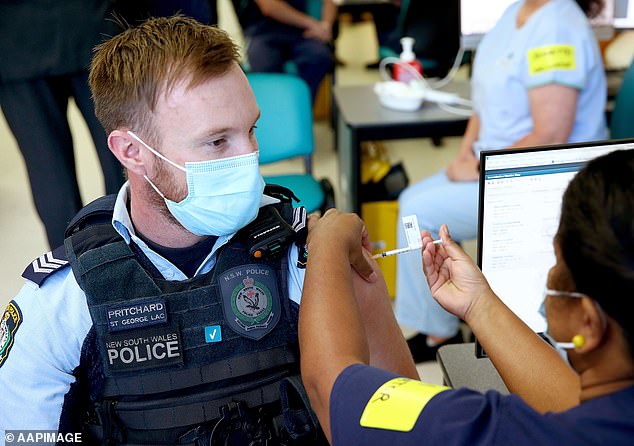 Australians will be banned from travelling overseas for a holiday in 2021 despite the start of the Covid vaccination program.

Hubs have now been set up in every state and territory to administer the Pfizer vaccine, with health and border force workers and aged care residents among the first to get the jab on Monday.

Despite the vaccine having an efficacy rate of 95 per cent, senior cabinet ministers have downplayed the possibility of Australians being allowed to travel overseas for a holiday this year.

Australians will be banned from travelling overseas for a holiday in 2021 despite the start of the Covid vaccination program. Pictured is New South Wales police officer Lachlan Pritchard receiving his first Pfizer vaccine in Sydney on Monday

Finance Minister Simon Birmingham was even reluctant to pronounce the end of economically-crippling state border closures.

‘We hope that there aren’t virus outbreaks. We have to deal with the reality that that could happen,’ he told Sky News interviewer Peter Stefanovic on Monday.

Nonetheless Senator Birmingham, whose wife Courtney Morcombe is the chief-of-staff to South Australian Liberal Premier Steven Marshall, was hopeful Covid vaccines will put an end to state border closures to stop the spread of the virus.

‘Once we see all older and vulnerable Australians and those at the highest risk categories vaccinated, there will be discussions about how that changes the risk in dealing with Covid,’ he said.

‘I do hope that that changed risk profile will enable us to have more confidence to keep those borders open and to continue the very strong economic recovery that Australia already has.’

Health Minister Greg Hunt hinted Australians would not be allowed to travel overseas again until there were no more local deaths from Covid.

Despite the vaccine having an efficacy rate of 95 per cent, senior cabinet ministers have downplayed the possibility of Australians being allowed to travel overseas for a holiday this year. Pictured is Hawaii

‘Well, our first goal is protection,’ he told the ABC’s Insiders program on Sunday.

‘And what we see is with both the two initial vaccines, the Pfizer and the AstraZeneca vaccine, the international evidence is that the safety impact for prevention of serious illness, hospitalisation, death has been determined to be up to 100 per cent.’

Mr Hunt also declared on Monday that Australian travellers would still need to quarantine in a hotel, even if they had received a Covid vaccination overseas, as vaccine-resistant strains of coronavirus circulate in the UK, South Africa and Brazil.

‘For the time being, vaccinated or unvaccinated, people will continue to go through hotel quarantine,’ he said.

The Pfizer vaccine is being reserved for frontline healthcare and border force workers, elderly Australians aged over 70 and those with medical problems.

The AstraZeneca jab, which has 62 per cent efficacy from serious illness or death, received Therapeutic Goods Administration approval last week and is scheduled to be administered from March.

Prime Minister Scott Morrison on Sunday became the second Austalian to be given the Pfizer vaccine, after 84-year-old Sydney grandmother Jane Malysiak, who immigrated to Australia from war-torn Poland when she was 13.

‘I didn’t have any side effects from it, just a bit of a sore arm like you get after any vaccine,’ he said on Monday.

‘I’m sure there will be some people who have other side effects, just like with any immunisation program.’

Despite the vaccine rollout, the ban on Australians travelling overseas for a holiday, that began in March 2020, is likely to continue

An Australian in the United States, who received the Pfizer vaccine, said she felt nauseous for a day after receiving the injection.

This week, 60,000 people in Australia are scheduled to get their first injection.

Despite the vaccine rollout, the ban on Australians travelling overseas for a holiday, that began in March 2020, is likely to continue.

Professor Brendan Murphy, the secretary of the Department of Health, last month indicated that travel ban would continue into 2022.

Turkish military source: Greece is carrying out military activities to escalate tension in the Aegean Sea

How to Stay Warm and Get Warm Clothing – Valheim Wiki Guide

How to Stay Warm and Get Warm Clothing - Valheim Wiki Guide