Why do liberals have such low expectations for black people like me, asks BIM AFOLAMI MP 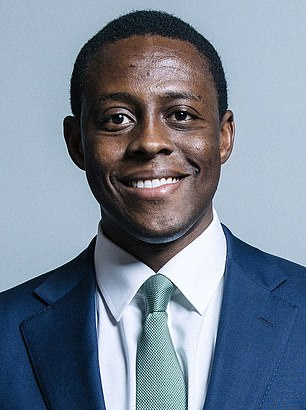 Are black men not supposed to be allowed to attend top schools, live in nice villages, or support whatever political party they wish, asks Bim Afolami (pictured)

There were some pretty distasteful comments about me on Facebook earlier this year.

I found myself described as a ‘black boy’ who, because I went to Oxford (a ‘posh uni’), and ‘live in an expensive village’, was somebody whose ‘life bears no bloody resemblance to black kids growing up in the inner city’.

My comments on racial issues were dismissed because I lack the ‘self-awareness to see he is being used’. I am described as ‘a traitor to his race and to his colour’ because I am a Conservative MP.

You might think that this patronising and racist nonsense might had been written by the English Defence League, or perhaps by fragments of the hard Left. Yet these comments came from a local Liberal Democrat activist in my constituency.

According to Facebook, her post was seen by at least half a dozen current or former Lib Dem councillors and candidates in the area, including their Hitchin and Harpenden parliamentary spokesman. None of them objected or criticised what she had to say.

And since then, she has been described by the Lib Dem party’s parliamentary spokesman as someone who finds ‘racism utterly abhorrent in all its forms’. Hmmm.

Politicians such as myself have thick skins and we take the rough with the smooth. However, others not in the public eye must also deal with this patronising nonsense disguised as liberalism.

Are black men not supposed to be allowed to attend top schools, live in nice villages, or support whatever political party they wish? Or is the only way of being authentically black to live in the ‘inner city’?

It is such regressive attitudes, notably prevalent among sections of the ‘progressive’ Left, which is one of the principal racist barriers holding back so many black people in this country. Politicians such as myself have thick skins and we take the rough with the smooth. However, others not in the public eye must also deal with this patronising nonsense disguised as liberalism

The sad truth is that black people will not be able to fully thrive until conceited liberals of this sort stop trying to keep us in ‘our place’.

People of any background or colour should aspire to achieve whatever they set their minds to. When I see my black Conservative colleagues like James Cleverly, Kwasi Kwarteng, Kemi Badenoch, Darren Henry, Helen Grant and others, I see people who are not just politicians of great ability but people who were all very successful in their careers before politics.

We are Conservatives because we believe in opportunity for everybody. We do not believe that you should be kept in your place because you are black, Asian or, indeed, white from a working-class background.

The bigotry of many in the Left is insidious and hidden.

Black people and other minorities are too often seen as people to be looked after, or controlled, or patronised. Many on the Left proclaim racial equality in public and virtue-signal for Black Lives Matter, yet actually do not seem to want individual black people to have the right to choose their own destiny.

And, of course, when minorities do talk about their experience of racism, they must ensure it fits the agenda of this band of anti-racists.

During the summer, we had the shameless spectacle of 32 Labour MPs dismissing Home Secretary Priti Patel’s experience of racism as ‘gaslighting’ – discounting her evidence as manipulative and dishonest. When people of colour do not toe the line the Left wants them to take, they face racist condemnation. 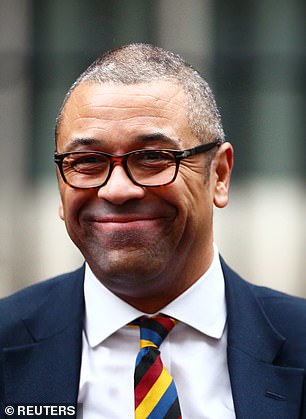 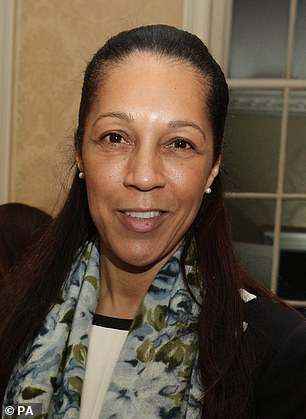 People of any background or colour should aspire to achieve whatever they set their minds to. When I see my black Conservative colleagues like James Cleverly (left), Kwasi Kwarteng, Kemi Badenoch, Darren Henry, Helen Grant (right) and others, I see people who are not just politicians of great ability but people who were all very successful in their careers before politics

The message is this: Black Lives Matter, just as long as you agree with us.

As a young black MP, I am fully aware that I am under quite a spotlight, and I don’t shrink from that. I use it to try to inspire young men and women from all backgrounds, particularly from ethnic minorities. When I speak to them, at a public event or in private, my message is constant: work hard, keep focused, search for opportunities, use your talents and this country is fundamentally good and decent and you can make it.

You can fight through the barriers that still, regrettably, do exist in many quarters.

For those interested in politics, I reassure them that the caricature that many have of the Conservative Party is not true – though not perfect, we are a party where we seek to recognise and develop your talent.

Last summer, I set up a programme in my constituency called Opportunity Fellows. It brought together 14 able but under-privileged local teenagers of every ethnicity.

With the help of pioneering charity the Patchwork Foundation, I put together a two-week programme: one week in Parliament, followed by one week of work experience in businesses ranging from the accountancy giant KPMG to tech start-ups.

The programme started at the premises of law firm Norton Rose Fulbright, where we spent two days working on ‘soft’ skills such public speaking, networking and developing leadership skills. 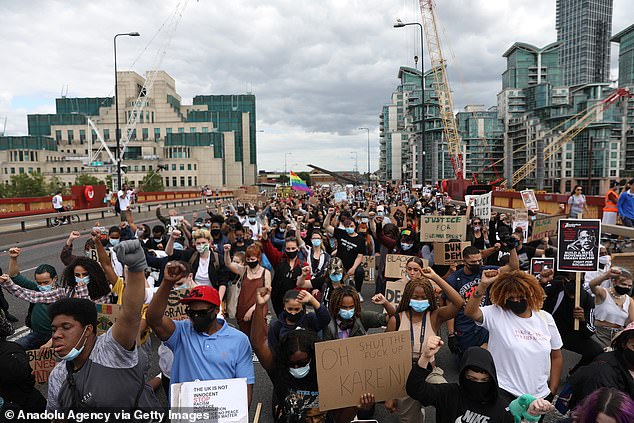 Black people and other minorities are too often seen as people to be looked after, or controlled, or patronised. Many on the Left proclaim racial equality in public and virtue-signal for Black Lives Matter, yet actually do not seem to want individual black people to have the right to choose their own destiny. (Above, a BLM protest in London in July)

Spending time with those young people, I noticed that the attitudes were broadly similar whether they were from an ethnic minority or not. They were ambitious for their futures and were definitely not going to allow pockets of prejudice to stand in their way.

But they were nervous that they didn’t know the right way to speak, or the right way to act in front of certain types of people – like a partner of a law firm, a successful entrepreneur or an MP. Their barriers were often psychological – a sense that people like them did not belong in towering buildings in Canary Wharf, or in the halls of power in Westminster.

They did not take it for granted that they would be accepted anywhere if they had the talent. They felt that certain places, certain jobs and certain positions were not for people like them.

And this problem is compounded further when you have politicians such as Lib Dem MP Wera Hobhouse effectively telling people from minority backgrounds they will only be able to enter Parliament if we have all-BAME shortlists.

Quotas and shortlists say to young people of colour that they cannot succeed unless white candidates are taken out of the way. They allow everybody else to look at successful BAME politicians and say: ‘You are only there because of your race.’

This Black History Month – and, of course, for the future, too – I believe that the debate in this country needs to recognise a simple truth: black people are part of the history of this country. Black history is British history. We deserve every opportunity just like anyone else. And our story is one of growing success.

Take the example of my father, an NHS consultant, and his father, my late grandfather, an Anglican vicar. Or women such as Yvonne Conolly, who, in 1969, became Britain’s first black female head teacher.

Or troops like merchant seaman Lionel Turpin, who fought for our freedom from the trenches of The Great War and the thousands of black soldiers who fought and died in the Second World War and helped save Europe from Nazi tyranny.

Today, we have a number of black MPs, Government Ministers, senior bishops and professionals. In future there will be more, from all walks of life.

I am not complacent. Educational and economic outcomes are still poor for many with an Afro-Caribbean or black African background. Racist attitudes are still there in many hidden pockets.

We need to see more black faces in the boardroom.

But the way to achieve this is to embrace aspiration and opportunity for everyone.

To champion and celebrate their success as judged by the content of their characters, rather than the colour of their skin.

Black people cannot be confined to the ‘inner cities’. We should be welcomed in good schools and ‘posh unis’ and, of course, the House of Commons.

That is the Britain that I want to see, and it saddens me that many so-called liberals – even in towns as wonderful as Hitchin and Harpenden – would wish to hold us back.

Which quarterbacks most need to turn things around?

Which quarterbacks most need to turn things around?