How income protection insurance paid me £1,200 a month when illness struck

When Inger Wallis visits her bank she always tells cashier Sajid Fani: ‘You’re my guardian angel’ – much to his embarrassment. She has been saying this since a brain aneurysm nearly killed her.

It was Sajid who advised her on one of her regular visits to the NatWest branch in High Holborn, central London, to buy an income protection policy. It would pay her a regular income, he said, if a long-term illness meant she could not work.

The Aviva-branded policy wasn’t cheap at £129 a month, but it proved invaluable. Inger, 49, says: ‘When Sajid sold me the policy in September 2008, one of my closest friends had just been diagnosed with breast cancer and had to have a mastectomy. 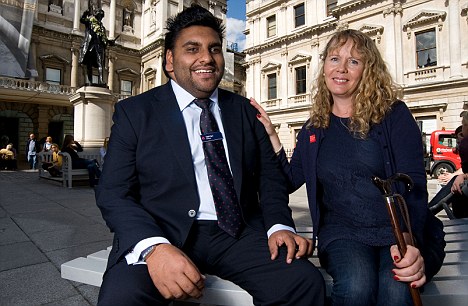 My hero: Inger Wallis, who suffered a brain aneurysm, with NatWest’s Sajid Fani. Her Aviva income protection policy pays her £1,269 a month

‘It just seemed sensible to protect myself financially in the event of a similar serious illness so I heeded Sajid’s advice.’

Inger, at the time retail manager at the Royal Academy of Arts in London, never thought that less than a year later the policy would help to replace a big chunk of her pay.

‘I was sitting at home in Bloomsbury on a day off watching television,’ says Inger. ‘I remember yawning and suddenly feeling as if someone had thrown a pan of boiling water over my head. I knew it was serious straight away and managed to ring 999.

‘Someone told me to open the front door. Although an ambulance arrived within five minutes, a paramedic on a bike got to me even quicker and nursed me.’

Within an hour, Inger had a CAT scan and soon afterwards she went into surgery. It was touch and go – she even made farewell phone calls to her daughters, Rosie, 23, and Amber, 18, but she pulled through.

But Inger has been left with an impaired thinking process, which meant she could not go back to her old role. However the Royal Academy has been supportive, creating a less demanding part-time position for her as an administrator overseeing the training of new recruits.

Her income protection policy has also been a financial lifesaver. It pays £1,269 a month, supplementing her Royal Academy income of £380. It means she and her husband, Simon, 46, a supervisor at the National Gallery in London, are only £200 a month worse off than before Inger’s illness.

She says: ‘It took me a year after the illness to regain the equilibrium in my life. Slowly but surely I’m coming to terms with my limitations. But I know that if Sajid had not sold me this insurance I would have gone back to work full time and either got sacked or had a nervous breakdown as a result of not being able to cope.’

Income protection, which is usually paid until your normal retirement age, is one of three main forms of insurance in the event of serious illness or death. While it pays a monthly benefit, the other two – critical illness cover and life insurance – usually pay a lump sum.

Critical illness insurance pays out in the event of a serious illness such as cancer, a stroke or a heart attack while life insurance pays out on death of the policyholder. These two are often sold together (see box, right), usually with a mortgage.

According to the latest findings from Aviva’s Family Finances Report, most families are still worryingly underinsured, with 60 per cent having no life cover, 85 per cent without critical illness cover and 90 per cent without income protection.

Louise Colley, head of protection for Aviva, says: ‘While nobody wants to think about the ‘what ifs, the reality is that the unexpected can and does happen.

‘By having some form of protection, people can have peace of mind knowing that they’re covered against some of the financial knocks that can affect anybody. Although no amount of money can solve everything, particularly in the case of losing a loved one, knowing that financial matters will be taken care of can give people the much-needed head space to concentrate on the more important things.’

A NatWest spokesman says: ‘Inger Wallis’s case shows that in difficult times or when the unforeseen happens, protection insurance can prove invaluable. We are pleased Inger had a positive experience and that Sajid was able to help her through what must have been a worrying time.
‘This is a shining example of our people doing the right thing for  our customers and reinforces the importance of building quality  relationships.’

As for Sajid, he has just been promoted to manager in a branch in the City of London.

Peace of mind is why Peter Roberts, 37, took out income protection when he bought his first home with his partner, Jaime Mussard, 26, four years ago. The couple from Northampton bought the cover from friendly society LV= through broker LifeSearch. Peter pays just under £26 a month for £1,000 of cover – far cheaper than Inger’s policy because of his age.

Peter, a product development manager for a commercial insurance company, says: ‘When we took out our mortgage with Northern Rock, we approached LifeSearch for life cover. When they turned round and said we should complement any life cover with income protection, we thought it would be stupid not to go with it. We now have peace of mind that if anything happens to us, our cover will kick in and give us a level of financial protection.’

‘In light of the continued retreat of the welfare state, it’s necessary for consumers not only to provide for their dependants when they die, which the more commonly bought life insurance does, but to provide for themselves and their family if they are too ill to earn a salary.
‘Sick pay and savings will only probably last a few months while the State now only offers a very basic safety net.

‘For these reasons, taking out your own income protection policy has become more important than ever.’ At present, statutory sick pay is £81.60 a week and is payable for a maximum 28 weeks. 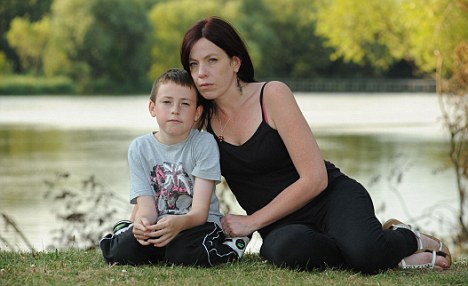 Vulnerable: Anita Hazel, with her son Max, was left financially exposed after the sudden death of her partner

Life cover is cheap but it must be set up properly – as Anita Hazel found to her cost last year when her partner of 14 years, Mark O’Brien, died from a pulmonary embolism.

‘Mark had been suffering from a cold,’ says Anita, 33, a part-time personal assistant at a car body repair shop. ‘Suffering from cabin fever after three days of being ill, he went to pick up my Mum in the car and he passed out at the wheel.

‘Somehow, she managed to steer the car into a lay-by, but by the time an ambulance had arrived Mark was already dead. It was a terrible shock. Mark was fit and healthy and lived for his football. And he had the gift of the gab – he was a carpet sales representative and he was brilliant at it.’

After the ordeal of the funeral, Anita began to sort out the household finances, comforted by the fact she and Mark, 34, had taken out life insurance.

Anita thought the Legal & General policy would pay off the Barclays mortgage on their flat in Basildon, Essex, giving her some financial breathing space. But to her horror she found out that because she and Mark had never married and not drawn up wills, the life insurance proceeds would not go to her but be put in trust for the benefit of their son, nine-year-old Max.

‘I was shocked,’ says Anita. ‘Mark had always said we’d sort out the will, get a pension which we both didn’t have and then get married. But it was always next year, not  this year.’

Thankfully, Anita was saved from acute financial difficulty when Mark’s employer agreed to pay her his death-in-service benefits without the need for a will or a marriage certificate, enabling her to clear the mortgage.

‘I learnt the hard way, but a lot of my friends have sorted out their wills as a result of my experience and ensured any life insurance cover is set up properly,’ she says.

Pensions specialist company Alexander Forbes has produced a useful guide, Coping With Bereavement. Copies are available from alexanderforbes.co.uk/bereavementguide. For details of an independent adviser who can ensure your life insurance is set up properly, visit unbiased.co.uk.

AFFORDABLE PROTECTION: Buy peace of mind from as little as £21 a month

Financial protection is not as expensive as you might think. For example, take £100,000 of combined critical illness and life cover bought for 20 years where the premiums are fixed. For a non-smoking male aged 30 buying cover from insurer Ageas, the monthly cost is £21.42 while identical cover for a woman of the same age would cost £21.86.

The cost of income protection varies according to age and whether you are a smoker. It also depends on occupation and the amount of time you are willing to wait before monthly payments kick in.

Riskier jobs cost more to insure while premiums drop if you are prepared to wait for monthly benefit to start.

For example, a female clerical worker aged 30 who is prepared to wait 13 weeks before benefits start and requires £15,000 a year of cover would pay £34.63 a month with Aviva while a man would pay £21.72 with Ageas.

In contrast, a 30-year-old male delivery driver would pay £47.17 and a woman driver £80.24, both with insurer Unum. Benefits would kick in automatically after 13 weeks, provided policyholders are unable to carry out their previous occupation.

Van full of booze is delivered to Manchester Metropolitan University