Why IS Covid in retreat around the world? Global cases fell by 16% last week 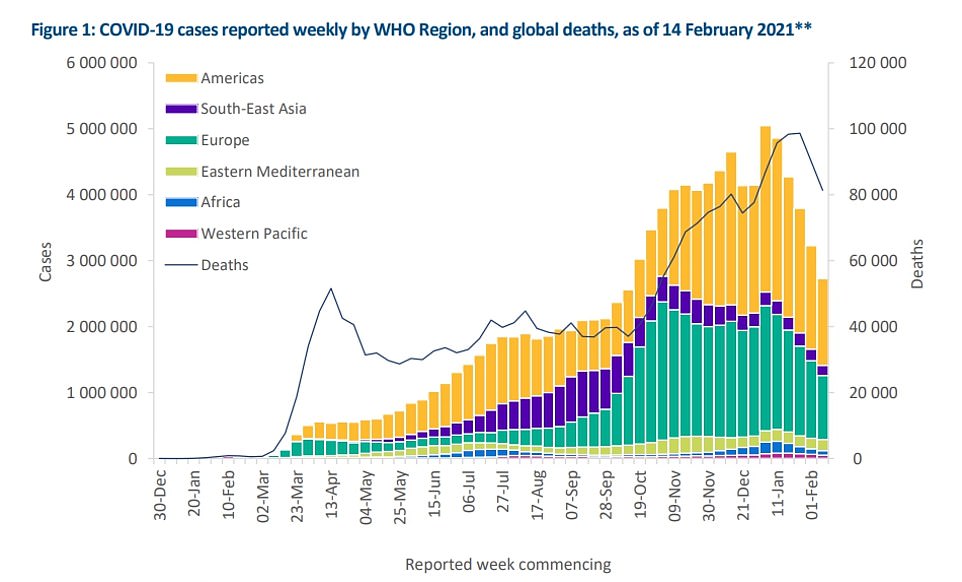 The coronavirus pandemic appears to be firmly in retreat around the world, with every corner of the globe seeing infections fall except the Middle East.

World Health Organization (WHO) figures show the number of new Covid cases fell by 16 per cent worldwide last week to 2.7million. It marks the fifth consecutive week infections have dropped after peaking at more than 5million in the week ending January 4. Covid deaths are also falling.

Infections plunged fastest in Africa and the Western Pacific (down 20 per cent), followed by Europe (18 per cent), the Americas (16 per cent) and South-East Asia (13 per cent). MailOnline’s analysis shows Myanmar was the nation that actually saw the biggest drop in cases, followed by Thailand and Sierra Leone.

The only WHO region to see Covid cases rise in the week up to February 14 was the Eastern Mediterranean, which mainly comprises of the Middle East, as well as parts of central Asia and North East Africa. Covid cases rose by 7 per cent there.

WHO director Dr Tedros Adhanom Ghebreyesus said the fact cases and deaths were falling globally highlighted ‘that simple public health measures work, even in the presence of variants’.

But experts are at odds as to why the key metrics are dropping universally around the world, despite immensely different lockdown tactics being deployed.

The roll-out of vaccines so far has been too patchy and not enough countries have access for the effects to be felt in the global data, according to Professor Simon Clarke, an infectious disease expert at Reading University. He told MailOnline seasonality ‘was likely to be at least partly responsible’ for the trend, adding: ‘This time last year I was sceptical about the seasonal link but I think it’s quite likely now.’

He said countries hit hard by the pandemic in the northern hemisphere, including in Europe and North America, are just emerging from the coldest months of winter, which could be slowing Covid’s spread. Many of the hardest-hit nations in Europe have also adopted tough lockdowns to combat second waves.

The virus, like so many respiratory infections, thrives as people spend more time indoors and are forced into close contact with others. Fresh, breezy air and warm temperatures, on the other hand, cut the risk of transmission.

Professor Clarke suggested countries in the southern hemisphere, including Brazil and Mexico, are in the middle of their summers, where the warm weather could be making Covid’s spread ‘quiet’. He added a clamp-down on international travel may also likely to be fuelling the global decline.

Experts are at odds as to why the metrics have risen and fallen at the same time around the world, despite immensely different lockdown tactics being deployed.

Revealed: The nations that have seen the biggest drop in confirmed Covid cases

Source: World Health Organization figures on confirmed Covid cases in the week ending February 14, compared to the previous seven-day spell. It excludes nations that saw fewer than 50 cases over the week, such as Australia and New Zealand.

The promising figures signal that the entire world is emerging from the other side of the second wave, which in many countries surpassed the peak of the initial outbreak last year.

The second wave was fuelled by variants that were far more infectious and even deadlier than the original strain, which meant previously-effective lockdown measures worked less well.

The Kent strain, for example, which cropped up in South East England in late December and has spread to nearly 100 countries, is up to 70 per cent more transmissible and 30 per cent more lethal than the Covid which first emerged in China. Variants with similar mutations in South Africa and Brazil triggered an explosion of infections in their respective continents.

WHO’s latest report shows the total number of confirmed cases since the pandemic began is 108million. But poor testing capacity in developing nations means the true number will be higher and not everyone will suffer symptoms.

Figures show virus-related deaths dropped by double digits last week and were down in every part of the world, falling 10 per cent to 81,340. The latest update takes the pandemic death toll to nearly 2.4million.

The Kent variant — scientifically called B.1.1.7 — was reported in 94 countries in the week to Monday, the WHO’s latest report said, an increase of eight.

In half of those countries it’s thought to be spreading in the community, as opposed to the other nations where the cases are all believed to have been imported.

The strain first spotted in South Africa — known as B.1.351 — was recorded in 46 nations, up two, with community spread happening in at least 12 of them.

The Brazilian ‘P.1’ variant — which has yet to be spotted in Britain — was detected in 21 countries, up six, with human-to-human transmission occurring in at least two countries.

In its coronavirus updates, the WHO divides the world into six regions — Africa, the Americas, Europe, South-East Asia, the Western Pacific — which includes Oceania and neighbouring Asian countries such as Malaysia – and the Eastern Mediterranean region.

Broken down, Africa reported over 68,000 new infections from all strains and 2,500 deaths, according to the WHO’s latest update, a 20 and 21 per cent decrease, respectively, compared to the previous week.

The Americas recorded the highest number of cases and deaths in the most recent week, with 1.3million and 44,000, respectively.

AFRICA: The continent reported over 68,000 new infections from all strain and 2,500 deaths, according to the WHO’s latest update, a 20 and 21 per cent decrease respectively compared to the previous week

AMERICAS: The Americas recorded the highest number of cases and deaths in the most recent week, with 1.3million and 44,000, respectively

EASTERN MEDITERRANEAN: The Eastern Mediterranean region recorded more than 170,000 cases up to February 14, a 7 per cent increase compared to last week. The region reported just over 2,500 new deaths, a 9 per cent decrease

WESTERN PACIFIC: The region, which includes Australia and New Zealand, two counties to successfully pursue Covid-zero policies, saw the fewest number of people catch the virus over the past week

SOUTH-EAST ASIA: In South-East Asia over the past week, there were about 150,000 new cases, a decrease of 13 per cent compared to the previous seven days. The region reported over 2,300 new deaths, down 9 per cent

The Western Pacific region, home to Australia and New Zealand which successfully pursued Covid-zero policies, saw the fewest number of people catch the virus over the past week.

In South-East Asia over the past week, there were about 150,000 new cases, a decrease of 13 per cent compared to the previous seven days. The region reported over 2,300 new deaths, down 9 per cent.

The Eastern Mediterranean region recorded more than 170,000 cases up to February 14, a 7 per cent increase compared to last week. The region reported just over 2,500 new deaths, a 9 per cent decrease.

Why did COVID fail to take off in India and has now collapsed? Mystery plunge in coronavirus baffles experts

Scientists are trying to work out why coronavirus cases in India are falling when at one point it looked like the country might overtake the US as the worst-hit nation.

In September the country was reporting some 100,00 new cases per day, but that went into decline in October and is now sitting at around 10,000 per day – leaving experts struggling to explain why.

While the Indian government has been keen to put the apparent success down to its mask-wearing and social distancing laws, few believe these measures alone are responsible for the dip.

Instead, experts believe it may be down to the fact that India’s largest cities have reached herd immunity, meaning the virus has moved to rural areas where it spreads slower and where cases and deaths are far less likely to be tested and logged.

A recent survey found 56 per cent of people in Delhi – the country’s most-populous city – have Covid antibodies, which is likely to be an under-estimate with 70 per cent required for herd immunity.

Only around 20 per cent of deaths in India are medically certified – meaning 80 per cent do not have an official cause of death – with analysts warning the country may be under-counting its Covid fatalities by two or three times.

The country also has a far younger population than many western nations – with an average age under 30 – and has far lower rates of obesity, which are both major factors in serious Covid infections and deaths.

Antibody surveys carried out in Mumbai, India’s second-largest city, and Pune also showed antibodies in around 50 per cent of the population, The Times reported.

‘The most densely-populated areas are already saturated and reaching the threshold of herd immunity, Giridhar Babu, an epidemiologist at the Public Health Foundation of India, told the paper.

‘The virus has now spread to rural areas, but they are not so dense.’

Having a less-dense population means the virus spreads slower, which will naturally bring down daily case figures.

But with access to healthcare in rural India often lacking, it may also mean that many cases and deaths are going undetected.

Testing data for India shows that just 0.5 people per 1000 are swabbed each day – one of the lowest rates among countries that report such data.

More data released in September last year showed that people in rural areas are less-likely to be swabbed than those in cities – meaning that as the disease moves away from urban centres, the number of positive tests appears to decline.

The average number of tests carried out per day has also been falling across the whole of India since mid-December, which could also help to explain why positive test results have fallen.

And even those who are swabbed may be returning false-negative results, with doctors warning in September last year that many states are over-reliant on rapid lateral flow tests, which are unreliable.

Rijo John, a public health policy analyst, also warned that some states are failing to report which kind of tests are being used, further muddying the picture.

‘More and more states are moving towards rapid antigen detection tests, which are known to have a high percentage of false negatives and not utilising the gold standard RT-PCR tests to full capacity,’ he said.

‘It should be made mandatory for all states to report the break[down] of different test types as well as the positives from these.’

Data also shows 80 per cent of Indians die at home, with no national requirement for a cause of death to be given before a body can be cremated or buried.

That has led experts to warn of a ‘substantial’ under-counting of deaths, with Dr Babu warning the true toll could be two or three times higher than the official count.