Why the style set are flocking to buy Diana’s woolly

The playful knit — featuring rows of white sheep and a single black sheep on a red background — caused quite a stir when the royal bride-to-be, newly engaged to Prince Charles, wore it with jeans to a polo match in the summer of 1981.

Not only was it a trendy twist on the stuffy outfits usually donned by the royals, but, with hindsight, perhaps that lone black sheep was making a statement about the role its wearer would go on to play in The Firm.

If her outfit raised eyebrows among courtiers that day, it caused even more of a kerfuffle in the tiny London knitwear shop owned by Joanna Osborne and Sally Muir, whose humble design was about to go global. 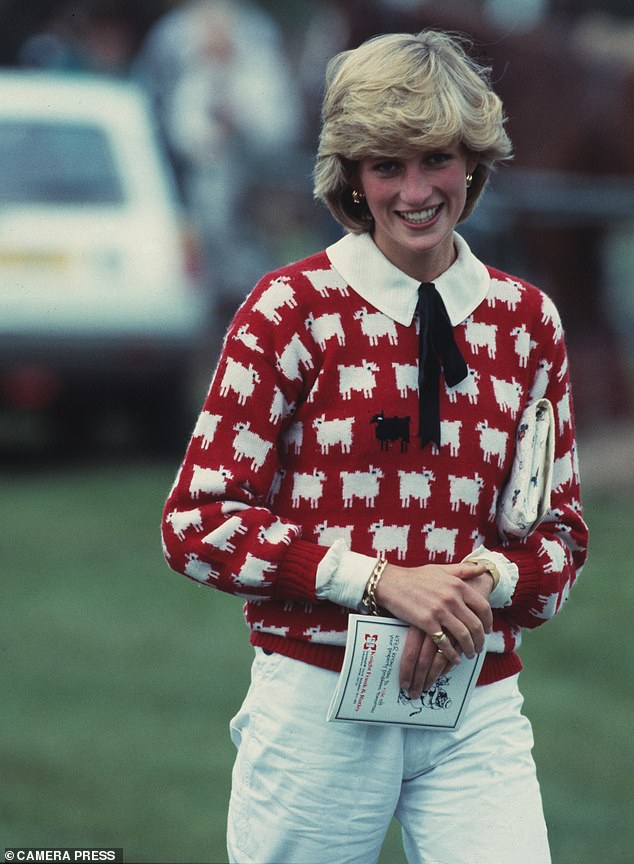 The sheep jumper Princess Diana stepped out in with jeans for a polo match in the summer of 1981 has been reissued. Pictured: Princess Diana sporting the jumper at polo in 1983

‘We didn’t know anything about it until suddenly she appeared on the front page of every Sunday newspaper wearing our jumper,’ says Joanna, now 65, whose partnership with Sally, also 65, continues to this day.

‘It was quite something. My father phoned up Buckingham Palace to see if we could get a royal warrant, which of course we couldn’t. But before we knew it, we were selling jumpers to almost everyone who walked past.’

The jumper became a Sloane Ranger staple and even found its way into the wardrobes of David Bowie, Tippi Hedren and Penelope Keith.

Eventually, it fell out of fashion and the duo stopped making it in 1994. But now, almost 40 years after Diana’s first outing in it, the original sheep jumper is back — and more popular than ever. Thanks to a collaboration with slick American brand Rowing Blazers, the vintage garment was reissued, with a few tweaks, earlier this month. An initial run sold out in 24 hours and it’s now on pre-order for February next year.

‘We expected people to be excited, but this has been completely astonishing,’ Sally says. ‘Diana is very much in the air at the moment.’

Indeed, with her much-anticipated arrival in the fourth series of The Crown next month, where she’s played by newcomer Emma Corrin, Diana’s iconic outfits are very much en vogue among fashionistas.

‘She was very good on loungewear — that relaxed look as she left the gym or popped to the shops,’ says Joanna. ‘She made that smart; it looked good on her, never scruffy. We’re all wearing a lot of that these days.’

The Princess was a fan of the sheep jumper, giving it another public outing in 1983, this time accessorised with a chic white collar and black ribbon. 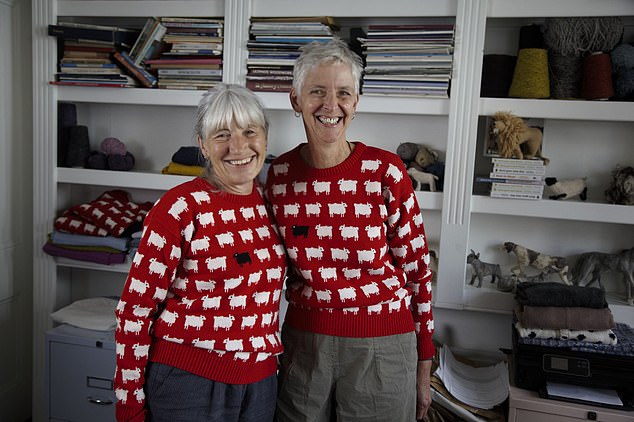 Joanna Osborne and Sally Muir (pictured) who designed the sheep jumper, ditched their jobs in publishing and television to set up their knitwear brand

Dressing Diana — although they never met the late Princess — has been an undoubted career high for the pair, who started out knitting for friends and family in Joanna’s bedroom, before setting up a market stall in London’s Covent Garden.

Having met through Sally’s brother in the late 1970s, they decided to ditch their respective jobs in publishing and television to set up their brand, Warm & Wonderful, in 1979, both aged 24.

‘We didn’t have a business plan or anything,’ says Joanna. ‘Fortunately, we had very supportive families. We drove to Nottingham and bought enough wool to make six samples, one of which was the sheep jumper.

‘Then we rang up little independent shops, said we were knitwear designers and asked if they wanted to buy any. Orders were in single figures, as we had to make them all ourselves.’

Next, they moved to a small workshop-cum-shop in Wandsworth, South London, where they drummed up custom from drivers sitting in traffic on the busy road outside. ‘We sprayed a sign on the window telling them to pull over and buy one,’ Joanna recalls. 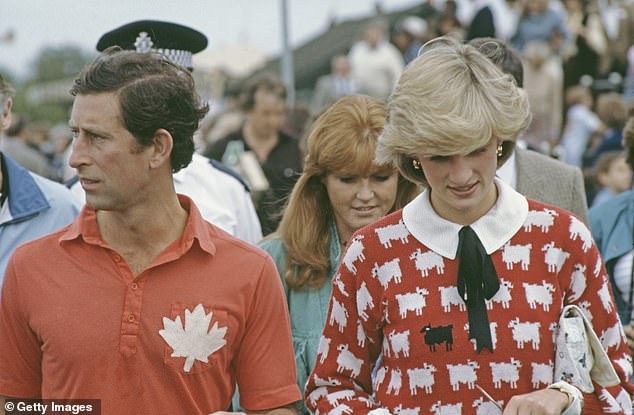 Joanna Osborne and Sally Muir’s jumper worn by Diana cost just £38, the remake is selling for £250. Pictured: Prince Charles and Diana at a polo match

To this day, they don’t know how Diana got her hands on their £38 sheep sweater (the remake is selling for £250).

‘We suspect the mother of one of her pageboys bought it for her as a gift,’ says Sally. ‘We had to look through our records, and we think she ordered it directly from us — after the wedding we recognised her name.’

The ensuing publicity came as quite a shock. ‘We didn’t really know how to capitalise on it,’ Sally explains. ‘We just thought: “Hey, that’s great.” ’

But the Press tracked them down. They rushed out a mail order catalogue, moved to a bigger shop and started attending trade fairs in New York, where buzz around the sheep jumper led to their designs being stocked in Saks and Neiman Marcus. Demand was so high they had to outsource some of the manufacturing to 40 knitters up and down the country. Joanna says: ‘Fortunately the sheep jumper is made on a machine. We sent boxes and boxes of yarn off to all sorts of places. We had one male knitter down in Cornwall; the rest were women.’

Each jumper was made to order, meaning the black sheep could be anywhere on the design. The most time-consuming part was the sheep’s eyes; each had to be embroidered by hand. 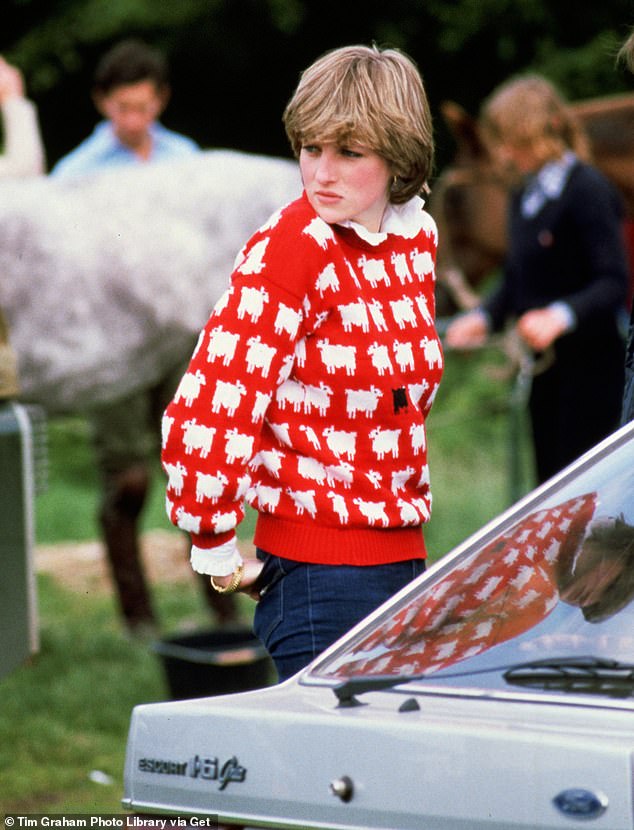 Joanna revealed the call from American brand Rowing Blazers to collaborate for the new design came out of the blue. Pictured: Diana at a 1980s polo match

Over 13 years, the pair sold around 8,000 sheep jumpers — after which time they had, perhaps understandably, had enough of it. ‘[By 1994] our whole style had changed; we’d been doing more hand-knitting and we started making cashmeres.’

But they were delighted to get a call about bringing it back.

‘It came completely out of the blue,’ says Joanna. ‘It was January 2019 and the Rowing Blazers founder, Jack, said his mother used to have her own sheep jumper.’ Sally adds: ‘We took no persuading at all.’

Sally is now a painter, while Joanna makes ceramic dogs, although their knitwear company, now called Muir & Osborne, lives on — and they couldn’t be more excited about this new throwback chapter.

As for Diana, she may have been their most famous — and fashionable — customer, but the pair insist she was never their muse. ‘Fashion in those days was quite dubious; some things were fabulous, others better off forgotten.’

Much like its wearer, the sheep jumper is certainly fabulous —and hard to forget.

You can pre-order a sheep jumper for £250 at rowingblazers.com