Wife for sale for sale… yours for a few farthings!

On July 16, 1830, a national newspaper published a cruel obituary. The dead man, it said, was ‘of all known beings the most selfish’ and ‘there never was an individual less regretted by his fellow-creatures’.

The subject of these insults was, perhaps surprisingly, the late king — George IV. Royal obituaries are usually more complimentary but, as Ian Mortimer points out, George was ‘one of the laziest, most vain, spoilt . . . and conceited Englishmen ever to have lived.’

He was also the man who provided the name for an era. As Prince Regent, he took on royal responsibilities when his father, George III, was suffering bouts of insanity. 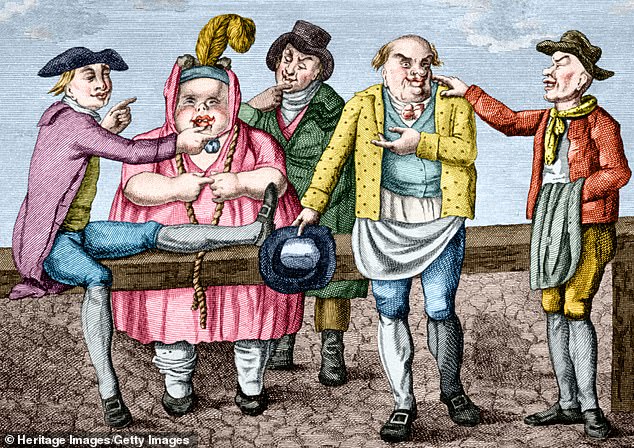 Ian Mortimer reveals contrasts between rich and poor between 1789 and 1830 in a new book. Pictured: 1797 cartoon shows a husband displaying his wife to would-be buyers at London’s Smithfield market

In the latest of his entertaining guides to various periods of history, Ian Mortimer has tackled Regency Britain, which he defines as the years between 1789 and 1830.

These decades were ones of enormous change and upheaval. In the early 1800s, Britain was still a largely rural nation. Like New Zealand today, the country had far more sheep than it had people.

Yet the Industrial Revolution was under way: cities were growing in size and squalor; Manchester and Salford were home to 10,000 mills, each one vomiting forth flame and smoke.

In London, slums were unbelievably sordid. Mortimer quotes the report of one city surveyor who ventured into a courtyard off St Giles High Street and immediately regretted it. The yard ‘was covered with night soil from the overflowing of the privy, to the depth of nearly six inches’.

This was a society of astonishing contrasts between rich and poor. The Prince Regent lived in golden splendour in Carlton House, Pall Mall; an old Irishwoman in a London slum, unable to work, was obliged to sublet half her bed.

Life expectancy in the new industrial cities was staggeringly low. The average age at burial was 19, thanks to the large number of deaths in childhood. Only about one in 20 of Britain’s population was over 65. (Today, the number is one in five.)

And yet there were still long-lived individuals. Daniel Bull Macarthy, who died at the age of 111, married his fifth wife at 84 when she was a teenager. They had 20 children together over the next 20 years.

Notoriously, it was an age in which all kinds of minor offences were capital crimes. In theory, you really could be hanged for damaging a fishpond, taking rabbits from a warren, or ‘consorting with gypsies’. 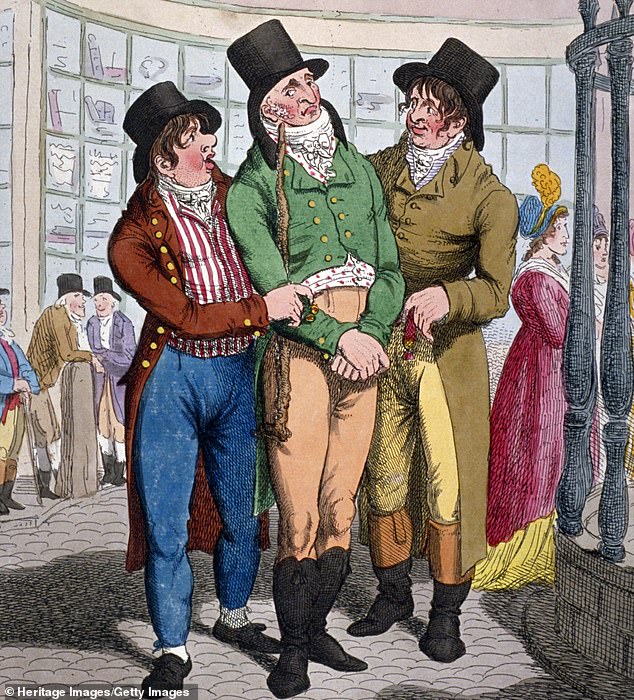 The homicide rate in Regency Britain was twice what it is today. Pictured: 1804 cartoon, St Paul’s Churchyard victim between two pickpockets

Penalties for being gay were regularly enforced. In 1810, a 16-year-old named Thomas White was accused of having sex with 42-year-old John Hepburn. Both man and boy were hanged. Transportation to Australia had recently become a punishment option.

In 1802, William Appleton, aged nine, was sent 12,000 miles from home for the crime of stealing slightly more than five shillings from a milkman’s cart.

Regency Britain was a violent place. Its homicide rate was twice what it is today (although a third of the rate in the 21st-century U.S.).

Duels were fought over trifling matters. In 1803, two gentlemen were walking their Newfoundland dogs in London’s Hyde Park when the animals attacked one another. The owners ended up arranging a duel, and one of them was killed. 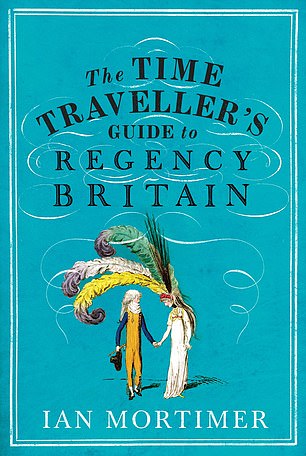 More peacefully, men of all classes enjoyed a bet, including some improbable ones. The betting book at Brooks’s gentlemen’s club records that Lord Cholmondeley placed a bet of 500 guineas, payable if Lord Derby made love to a woman ‘in a balloon a thousand yards from the Earth’.

Every page of The Time Traveller’s Guide To Regency Britain is crammed with enlightening information about the period, some of it just plain weird.

Fashionable ladies shaved off their eyebrows and replaced them with false ones made from the hides of mice. Men put their wives on sale and prices varied from a few farthings to £100 for an attractive young woman.

A doctor told the future politician William Pitt, then aged 14, that he should drink a bottle of port a day to ward off gout.

This was an age on the brink of modernity but, repeatedly, we are reminded that the past is indeed ‘a foreign country’ and ‘they do things differently there’.