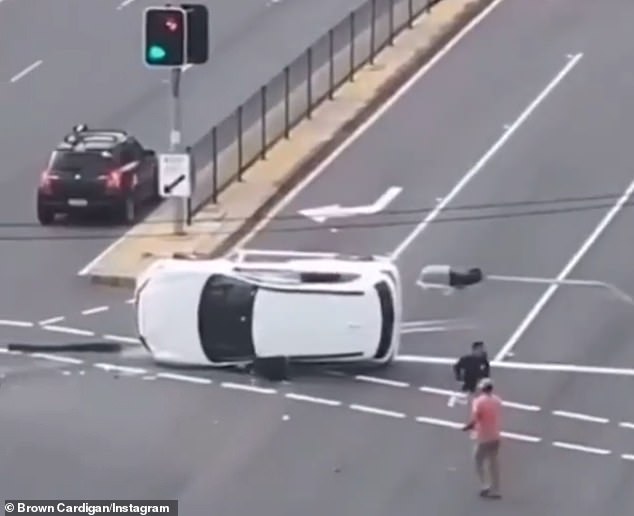 Four youths escape from underneath a flipped SUV – as cops charge three 13-year-old girls and a boy, 12, over alleged car theft rampage

The wild moment four youths squeeze out from underneath a smashed up SUV and run away has been caught on camera.

Shocking aerial footage uploaded to Instagram on Monday begins at the scene of a crash where a white SUV lies on its side across a busy Gold Coast, Queensland, intersection.

The video shows a youth in a dark t-shirt and shorts bolting from the vehicle, dodging a passerby who looks as though he is walking in to help.

As he does so a girl with long black hair in a red t-shirt, long black pants and white sneakers slides out from under the car and scuttles off, also avoiding the Good Samaritan walking towards the crippled car.

A third youth in a dark shirt then emerges, jogging from the scene as a fourth girl with long black hair appears, scurrying away.

The video ends with an aerial shot of one of the youths vaulting over the wall of a nearby block of units.

The shocking footage was uploaded a day after police arrested four children over the alleged theft of a 2017 white Mitsubishi ASX SUV.

Police say the stolen SUV ran a red light and hit a silver Toyota Camry, causing the SUV to roll on its side.

Police were called to the crash scene at the corner of Gold Coast Highway and Pacific Fair Drive just before 4pm on Sunday.

‘It will be alleged upon arrival four teenagers attempted to flee the scene on foot,’ police said on Monday.

A white SUV can be seen lying crippled on its side next to a silver sedan (left). Two young people can be seen running from the vehicle (right) as a passerby walks over to help

The SUV was one of two vehicles allegedly stolen from a Solitaire Place home in Robina on Saturday night, police said.

Three girls, all aged 13, were swiftly caught on Sunday while a boy, 12, was caught later at a home in Chairlift Avenue, Mermaid Beach, just after 8pm.

All four children were taken to the Southport Watchhouse where they were charged with unlawful use of a motor vehicle.

They are expected to appear before the Southport Children’s Court.

Investigations are continuing and police have urged the public to help by calling CrimeStoppers with information on 1800 333 000.

Daft Punk, French electronic music duo, announce they are splitting up after 28 years

Daft Punk, French electronic music duo, announce they are splitting up after 28 years