Will artificial intelligence become cleverer than humans? We look at what it would mean for our jobs, planet – and how we need to prepare NOW

Is AI ever going to be cleverer than humans?

Max has just written a book called Life 3.0 – praised by physicist Stephen Hawking and Tesla and Space X founder Elon Musk – and is also a professor of physics at MIT and co-founder of the Future of Life Institute.

‘I think it’s very likely,’ he says, ‘But don’t take my word for it, there have been a number of surveys of the top AI researchers and that’s really the prevailing view.

‘The median guess is maybe some decades from now machines will be able to be better than us not just at playing chess and Go and stuff like that but really at everything. 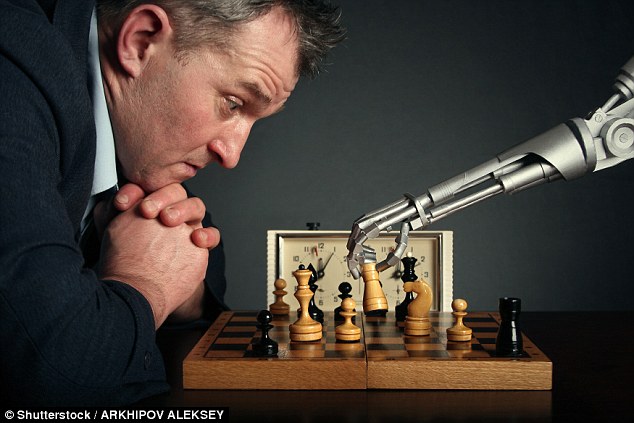 New world: For some time AI has been better at chess than humans, soon it could be better at almost everything

‘I think many people still dismiss this as science fiction because they think of intelligence as something mysterious that can only exist inside a biological organism like us, but from my perspective as a physicist, intelligence is simply information processing performed by biometric particles moving around by the laws of physics and there’s absolutely nothing in the laws of physics that says we can’t do that in ways that are even much more intelligent than the ways our brains do it.’

So what then? What do we do when artificially intelligence can do almost everything that we do better than us?

Max talks through what it could mean for our jobs (and which jobs we should be avoiding if we don’t want to be redundant in the next few years), our economy, our planet – even our universe.

He calls it the ‘biggest change in the history of humanity’ and one that we should all have a say in, not just the tech geeks who are developing the technology.

‘I wrote this book because I feel that we can’t just leave decisions for the entire future of humanity up to a bunch of tech nerds like us it’s everybody’s future and we should all be shaping it,’ he says.

Watch this episode of the Big Money Questions to find out how you can get involved and how to shake off our ‘carbon chauvinism’ to see what AI could be capable of.