Will we EVER learn to love the council flat kid who became F1’s greatest driver?

Even if you know nothing of Formula One and care still less for the high testosterone sport of motor racing, you will have almost certainly have heard of Lewis Hamilton.

There’s Lewis the red carpet regular with a string of glamorous celebrity girlfriends, Lewis the fashion icon with his tattoos, hair braids and bling,

Lewis the social activist with a checklist of fashionable causes from veganism to lecturing the world on green issues – a hard sell for a man who flies round the world earning £35million a year to race petrol-guzzling cars.

And, of course, there’s his courageous if controversial support for the Black Lives Matter movement.

He has been linked with several women, including singer Rita Ora – but has not been in another serious public relationship

These qualities, admirable as they may be, are not, however, what have made him the most recognised and most successful sportsman in Britain. For they are a mere by-product of his success on the track.

Yesterday, at 2.43pm London time, his status among a luminous handful of drivers who have graced motor racing received another coat of glory – victory in the Portuguese Grand Prix and his 92nd career win, a tally that puts him ahead of Michael Schumacher and everyone else who has ever taken the wheel of a 200mph racing car.

His win by a staggeringly comfortable margin of 25 seconds is turning his march to another record-equalling seventh world championship into a procession.

Yet for all the triumphs which have brought him riches beyond compare, he remains in the unique position of being a sporting hero who gets decidedly mixed notices.

On the one hand his story is a remarkable and uplifting one. A mixed-race trailblazer brought up in a one-bedroom council flat in Stevenage, Hertfordshire, watching drugs being pushed on the street below.

Now he is worth some £250million, the very definition of a self-made man, with a home in the millionaires’ enclave of Monaco, where his collection of shoes alone spans two rooms, and an Instagram account with 20million followers. 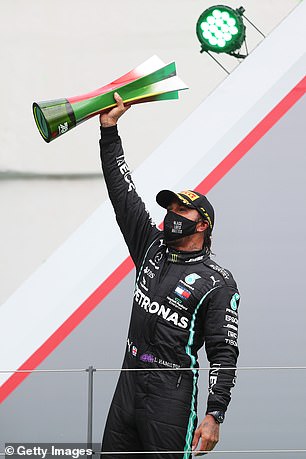 Yesterday, at 2.43pm London time, his status among a luminous handful of drivers who have graced motor racing received another coat of glory – victory in the Portuguese Grand Prix and his 92nd career win, a tally that puts him ahead of Michael Schumacher and everyone else who has ever taken the wheel of a 200mph racing car

At 35 he is on a par with the likes of Roger Federer, Lionel Messi and basketball great Michael Jordan in terms of being a true global superstar. But while lionised by many, sadly, he is not universally loved as much as his extraordinary deeds warrant.

The obvious contrast is with tennis great Sir Andy Murray, who escaped his early reputation for surliness and a thin skin to recast himself not only as a three-time grand slam champion but with a self-deprecating modesty. The country warmed to him.

Yet Hamilton’s achievements dwarf those of Murray who although briefly ranked No 1 in the world, is only fourth best in the quartet that includes Federer, Rafael Nadal and Novak Djokovic.

Hamilton is the outstanding driver of his era – and quite possibly of any era – who announced himself in princely style with a bravura overtaking move on the very first corner of his Formula One debut in Melbourne in 2007.

He missed out on the title in his rookie year by a single point only to win it by the same slender margin the following season.

Along with the reactions of a fighter pilot and the stamina of a long-distance runner, he possesses an ability to clear his brain so that it inhabits a state of perceptive clarity.

Those natural gifts, which were spotted by his father when he gave him his first radio-controlled car at the age of five – and watched his son beat rivals years older, are underpinned by an absolute will to win.

But allied to this genius has been a capacity to feel persecuted. He came close to answering why in a flippant remark he made in Monaco nine years ago.

After being penalised for strangely erratic driving, Hamilton questioned the sanction by invoking the Ali G line: ‘Maybe it’s because I’m black.’ He was only half joking.

Some people, depressingly, will hold his colour against him, but they are mercifully few in number. So why isn’t he as universally loved as other racing figures? Is it because he is too much of a mould-breaker? And if so why should it matter?

The raffishly good-looking James Hunt only ever won one world championship but he was adored, his early death burnishing his legend.

Sir Jackie Stewart, after Hamilton the most successful British driver, has acquired the status of national treasure, with the Queen appearing as guest of honour at his 80th birthday party last year.

Nor is Hamilton seen to be as cool as Sir Stirling Moss, or as modest as Jim Clark, who won two Wold Championships in the 1960s. Indeed the Hamilton persona has evolved, sometimes awkwardly, in the public eye.

The world had been taking notice ever since his days as child prodigy of the karting circuit.

Even then he was polished, articulate, perhaps too word-perfect, as he rose through the age groups and disciplines of motor racing helped in no small part by his father Anthony who made countless sacrifices – as well as holding down three jobs – to support his son.

Then came that moment when he dumped his father’s professional services in 2010. It was Anthony who had come up with the idea that Hamilton was going to live abroad to escape the constant attention of fans. His father’s choice of tax-friendly Switzerland suggested other impulses at play.

Moving so soon after his career had started and offering an eyebrow-raising pretext for doing so, damaged Hamilton’s reputation.

Beyond his father’s control, Lewis went in search of further freedom. He moved again, to Monaco this time, following a well-worn path of grand prix millionaires. He befriended rappers, pop stars and actors, and his increasingly outlandish style of dress reflected the tastes of his newly-acquired ‘friends’.

In came the tattoos and chains. His ears were pierced. His hair, suspiciously more plentiful than in his early twenties, was grown out.

He made music and designed clothes with Tommy Hilfiger. Other lucrative collaborations came with the fashion brands Police and Puma, the watchmaker IWC, the Italian motorcycle marque MV Agusta, and the energy drink manufacturers Monster.

Hamilton began taking his bulldog puppy Roscoe into the F1 VIP paddock. His other most constant companion – and most profound influence – through these years of self-discovery was girlfriend Nicole Scherzinger, the Pussycat Dolls singer he had first met in 2007.

Seven years his senior, she took him deeper into American celebrity culture, as he cultivated a strange mid-Atlantic twang. But she was only an occasional presence at races, where Hamilton and she would hold hands and say grace together before lunch. Their on-off relationship fizzled out in 2015.

Alluding to the split, Hamilton said: ‘My cars are my babies. I used to say, when I had a girlfriend, “I’m taking one of the “girls” out, so you can come if you want, but you come second to the cars”.’

Since then he has been linked with several women, including singer Rita Ora – but has not been in another serious public relationship. 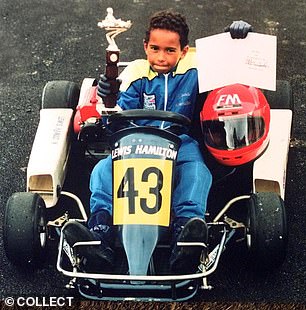 The world had been taking notice ever since his days as child prodigy of the karting circuit. Even then he was polished, articulate, perhaps too word-perfect, as he rose through the age groups and disciplines of motor racing helped in no small part by his father Anthony who made countless sacrifices – as well as holding down three jobs – to support his son.

The last few years have seen him embrace various enthusiasms and life choices, not least as a proselytising vegan, and he was involved in the launch of Neat Burger, a central London restaurant describing itself as ‘the first plant-based sustainable burger chain of its type’.

He has also spoken of environmental concerns – recently chiding journalists for wearing disposable face masks lest they clutter the ocean floor. ‘Hypocrisy!’ scream his detractors.

Yet Hamilton is instinctively kind, caring for team members who have suffered hardship, and he is devoted to his half-brother Nicolas, who has cerebral palsy. But while he is well-meaning he can be naive and, frankly, a bit preachy.

Never have these combinations of his personality been so evident as in the latest and possibly deepest of all his passions – his outspoken anti-racism campaign, which was given sharp impetus by the killing of George Floyd in Minneapolis, Minnesota, by a white policeman.

As the only black driver in the whitest of sports, he deserved to be listened to.

He called for fellow drivers to join him in ‘taking a knee’ before each race this season. Some of his peers were less than keen to genuflect for the cause.

Hamilton then accused the reluctant handful of being complicit in racism unless they spoke out and proved otherwise.

But all of these are mere distractions. Winning remains his number one ambition and as he showed yesterday it has taken him beyond the reach of his rivals.