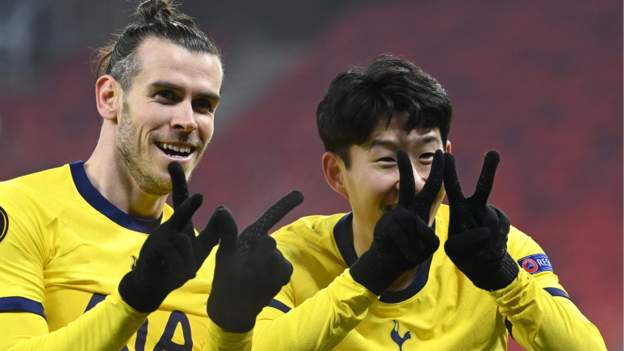 
Gareth Bale scored and assisted a Tottenham goal in the same game for the first time since 2013 as they beat Wolfsberger in the Europa League.

Bale crossed for Son Heung-min to head the opener and then cut inside and blasted home their second goal.

Spurs boss Jose Mourinho spoke beforehand about how much he wants to win the Europa League and named a strong team, although Harry Kane was left in London for fitness reasons.

They were excellent in the first half but were much less impressive after replacing Son with Vinicius at half-time.

Wolfsberger were limited opposition, sitting sixth in the Austrian league and in a European knockout game for the first time. The game had to be played six hours away in Budapest, Hungary because of Covid restrictions.

The second leg is next Thursday at the Tottenham Hotspur Stadium.

Bale and Dele Alli were the notable starters in the line-up for Spurs. Mourinho said beforehand he was worried about the result and not individual performances of fringe players – but he would have been happy with what he saw in the first half.

Bale set up the opener when he received Matt Doherty’s pass before crossing for Son, who matched his personal goal tally of last season with 18.

That was Bale’s first assist for Spurs since April 2013 against Manchester City – before he left for Real Madrid.

Doherty picked out Bale again, but this time the Welshman cut on to his left foot and smashed a powerful effort past the goalkeeper, his fifth goal of a loan spell from Real.

When Moura beat several defenders on a mazy run to score Spurs’ third, it looked as if it could be a rout.

Alli looked in the mood too, with a brilliant nutmeg to create a shooting opportunity although he fired straight at the keeper.

But they looked much less fluent in the second half, with Bale and Alli more peripheral before being replaced.

Moussa Sissoko sloppily conceded a penalty which Liendl scored and the hosts looked more assured. Had Wernitznig’s powerful drive off the crossbar gone over the line instead of bouncing on it, it could have been a different tie.

But Vinicius most likely booked Spurs’ place in the next round when he stabbed home Erik Lamela’s flicked header late on.

Pablo Hasel: Violence in Madrid and Barcelona over rapper’s jailing

Pablo Hasel: Violence in Madrid and Barcelona over rapper's jailing