Teenager who feels ‘really weird’ about her dad, 59, dating a woman of 19 divides opinion on Reddit as some claim it’s ‘none of her business’ while others brand him a ‘creepy predator’

A woman who is uncomfortable with her father’s decision to date a teenager has sparked a debate about getting involved in parent’s love life.

Posting anonymously on Reddit, the American woman, 18, explained she found out that her 59-year-old father is dating a woman aged 19, after going to his house unexpectedly.

She said her father has been divorced from her mother for seven years, and went on to have a relationship with a woman around his own age, which ended two years earlier.

The daughter said she find it’s ‘really weird’ that he’s now seeing a teenager and is her first boyfriend, but doesn’t know how to broach the subject.

Responses to the post were divided as some argued children shouldn’t get involved in their parents’ love life, while others branded her father a ‘predator’ and urged her to seek advice from other family members. 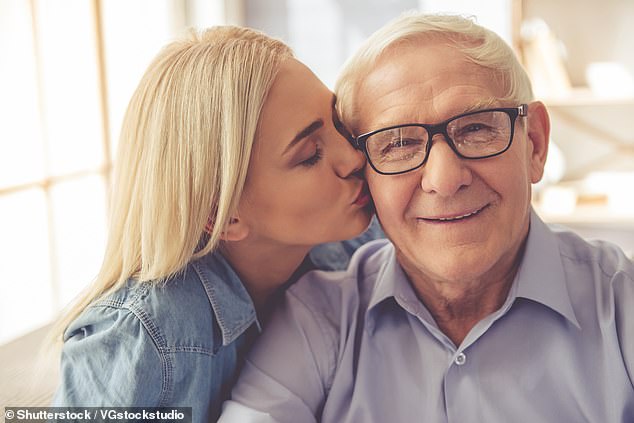 An anonymous woman has sparked a debate about getting involved in parent’s relationships, if it makes you feel uncomfortable (file image)

Explaining the situation, she wrote: ‘My dad’s been divorced from my mom for seven years now. He had a girlfriend of almost his age and they broke up about two years ago. Now he’s dating a 19-year-old girl.

‘She seems comfortable with it, but I can’t help but worry, first off for my dad since this is really uncharacteristic of him, and second for the girl. She seems kinda innocent and I don’t know if this could be bad for her in the long run.

‘The girlfriend’s mom said my dad is her first boyfriend and that’s very worrysome. I don’t think it’s a healthy relationship, but I also know I don’t have the right to interfere in other people’s lifes (my dad leaves my relationships pretty much alone).

‘He hasn’t told anyone of the family, not even my 24-year-old sister (who lives in another country), I found out by going to his house while she was there.

‘I worry for both of them since I don’t know if that could be a healthy relationship. Some part of me also worries that the girlfriend might be trying to take economic advantage of my dad, but I prefer not to think so badly of her.

‘Should I talk things out with them somehow? Or just leave their relationship alone?’ 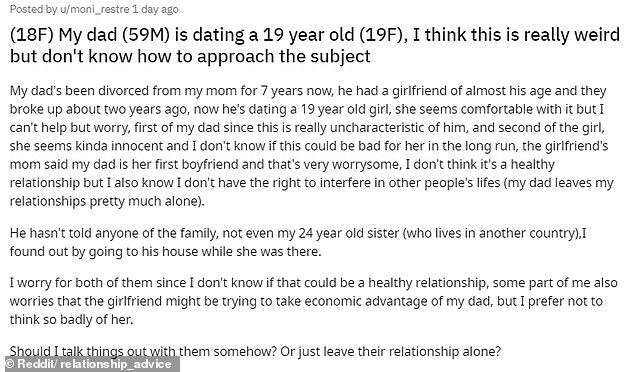 Posting on Reddit, the woman explained her father has been divorced for seven years and the rest of her family are unaware he’s dating a 19-year-old

Many responses to the post argued there isn’t anything the woman can do about the situation because her dad and his girlfriend are consenting adults.

One person wrote: ‘It’s their business. If the girl and her parents are OK (but as she is legal age their consent is not required) – it’s OK and none of your business. It’s just the same with opposite situation when woman is older’

Another agreed, saying: ‘Midlife crisis, sex drive, a need to feel young again, economic advantage, whatever. You have no business to worry about who your father is f*****. If it is illegal, call the police, if you feel it is immoral then move away’.

Others argued the woman should confront her father or at least ask the rest of her family for their opinion.

‘Your dad sounds like a predator and if I’m being honest, I doubt there’s much you can do. It’s often in these situations where if you try talking things out, they won’t care and they’ll just be mad at you. However, you definitely should try. She clearly sounds inexperienced to be going for someone triple her age,’ one said.

‘Your dad is a predator. Ignore the people in the comments j***** in their own palms about having sex with teenagers saying it’s fine. The reason why your dad hasn’t told anyone is because he knows he’s being a creep. Put him on blast and tell your whole family,’ one wrote.

Another said: ‘If you want to be really petty can ask your dad if she is a substitute for you. Make it awkward.’

A third added: ‘Sometimes people enter into relationships in a vacuum and it seems to work because there is no outside voice saying “you sure?” to check the reality of the situation. My advice is to tell your older sister so at least you have someone to talk to about it.’