A young woman says she was left ‘humiliated’ after being ‘kicked out’ of a Wetherspoon pub for wearing an ‘inappropriate’ top.

Furious Mollie Wood, 20, claims a manager at The Back of Beyond in Reading, Berks, said he would not serve her because her top was ‘equal to a man being shirtless’.

Tech worker Mollie, who was with friends Amy Wood, also 20, at the time, says her and her friend were dressed in black halter crop tops, ankle-length skirts and trainers on Sunday – as the country basked in 82F heat.

The pair had walked into the pub after watching England beat Croatia 1-0 in the Three Lions’ opening Euro 2020 match-up.

But, after originally being allowed in, she says her and Amy were refused service by a male bar boss.

She said the manager told the pair that he had been turning away men without tops ‘all day’.

Mollie, who lives in Reading, said: ‘We got half-way walking through the pub when a male manager shouted for us to stop.

‘He said ‘You can’t come in here, you’re dressed really inappropriately and it isn’t suitable. You can’t be wearing a top like that’.’

When Mollie questioned him as to why her clothes were ‘inappropriate’ he told her it was ‘because that’s like a man being topless and we’ve been kicking topless men out all day,’ she said. 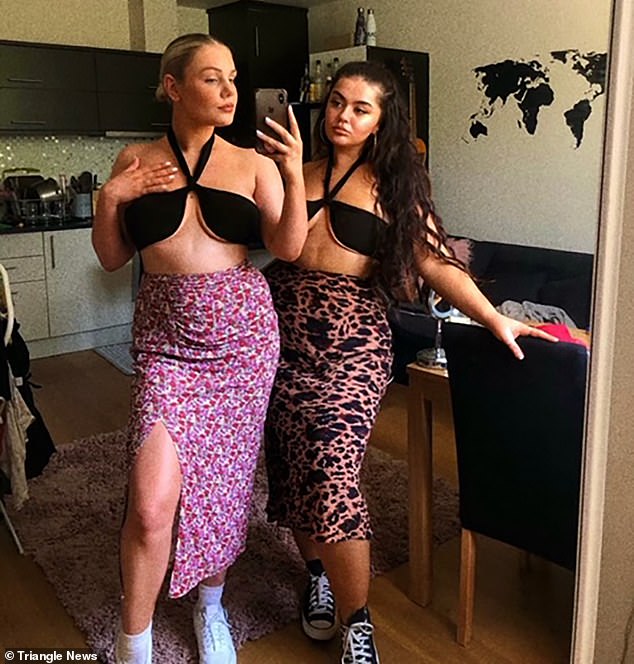 Mollie Wood claimed she was told by a male manager she would not be served because her cleavage showing was ‘equal to a man being shirtless’. Here she and her friend Amy are pictured – with Mollie in the top she was wearing at the pub 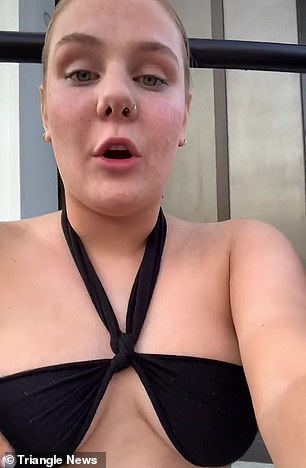 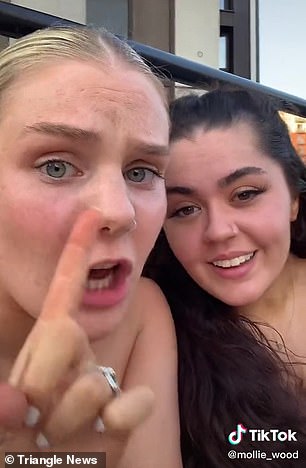 The 20-year-old, who talked about her experience on social media site TikTok, said the bar boss told her he had refused service all day to blokes without tops. She said she and her pal Amy, also 20, wouldn’t be served either because they were dressed ‘unsuitably’ 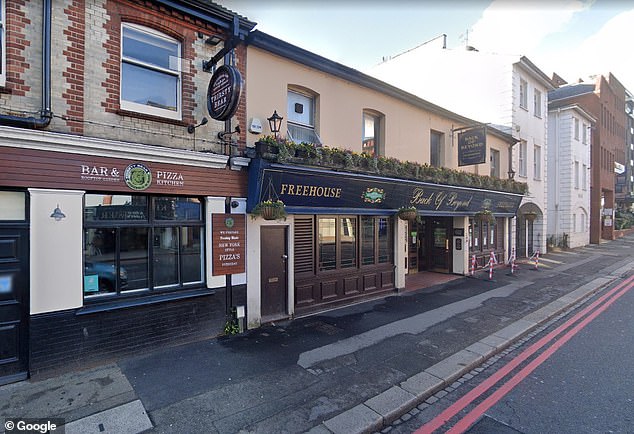 The tech worker explained how she and a pal had headed to The Back of Beyond pub (pictured) in Reading, Berks at 8pm on Sunday after watching England beat Croatia in the Euro 2020 group game

Mollie explained how she and Amy had headed to the pub at a 8pm on Sunday, after watching England beat Croatia 1-0 in the opening Euro 2020 match.

She said both she and Amy were let in by the female bouncer where they also checked into NHS test and trace and showed their IDs before heading out to the garden.

They were then stopped by a male bar manager, who refused them service.

Mollie explained how she and Amy quizzed the manager over the dress code, but couldn’t get a straight answer as to whether there was one.

Mollie said she later researched online and could not find anything that pointed towards a Wetherspoons dress code.

She added that she had also been served in the same pub earlier that week, wearing exactly the same top.

She added: ‘We’d been in four pubs earlier that day and never been denied entry. 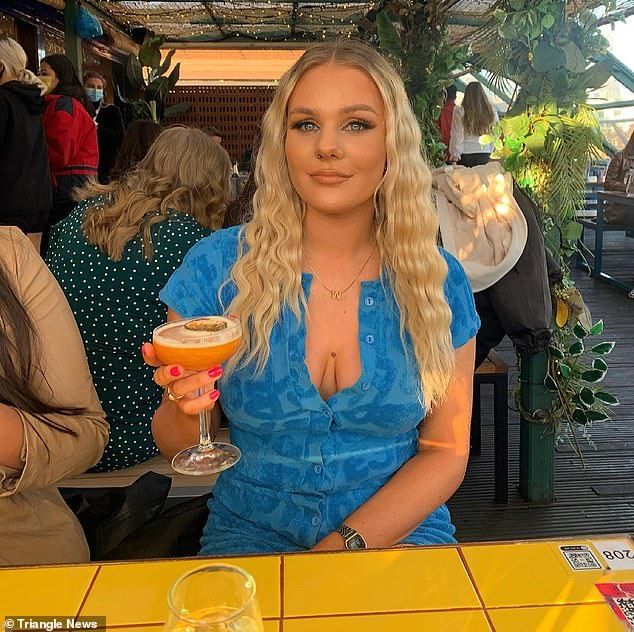 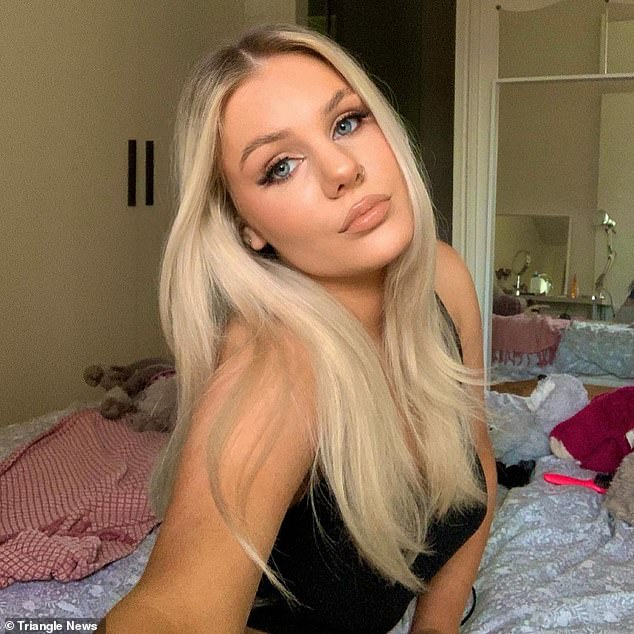 After discussing with Amy and calming down away from the pub, they both decided to go back and complain about the way they had been treated. But when they arrived and raised a complaint, Mollie (pictured) said she was met with more comments and rudeness 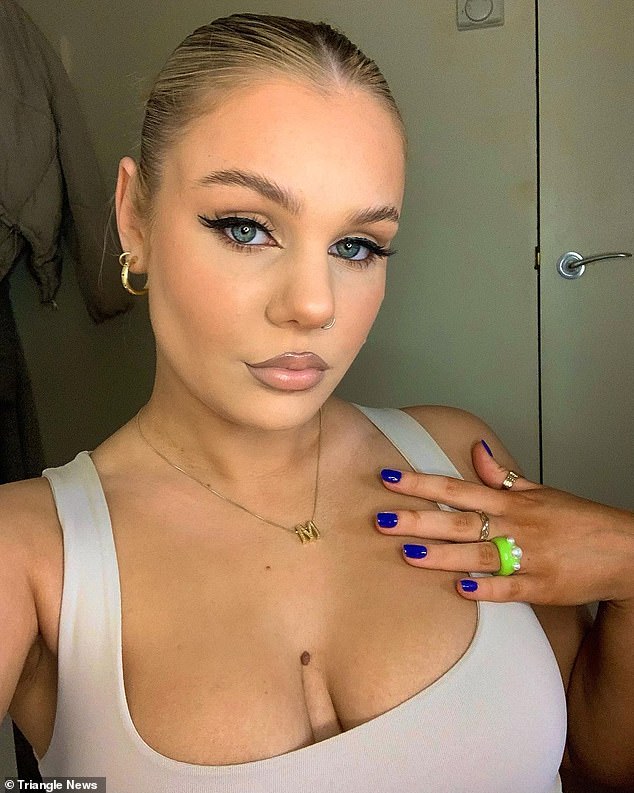 Mollie explained how they also asked the female bouncer why she let them in if they were dressed so ‘inappropriately,’ but didn’t get a straight answer either

‘I told him how sexist it was to compare me to a topless man. I was wearing a top. I wasn’t topless.’

Mollie said she left the pub feeling totally embarrassed and reeling from the blatant sexism.

But after discussing with Amy and calming down away from the pub, they both decided to go back and complain about the way they had been treated.

But when they arrived and raised a complaint, Mollie said she was met with more comments and rudeness.

She said: ‘He was holding the bridge of his nose and huffing, and he turned his back to us when we were speaking about it.’

Mollie explained how they also asked the female bouncer why she let them in if they were dressed so ‘inappropriately,’ but didn’t get a straight answer either.

She said: ‘I’ve got a larger chest. Even if I wore a turtleneck you’d still see a very noticeable shape.

‘My boobs are always going to show because I have them and there’s nothing I can do about that.’

Mollie said she was further shocked after sharing the video to TikTok and receiving a barrage of comments from women saying they had experienced similar things at the well-loved pub chain.

Wetherspoon spokesman Eddie Gershon said: ‘Two female customers visited the Back of Beyond pub in Reading on Sunday evening at approximately 7.40pm.

‘Shortly after entering, the customers were politely asked to leave the pub as, on consideration by the pub’s management team, their dress was not, in this particular case, in accordance with the company’s guidance to pubs on appropriate customer dress.

‘What may be considered appropriate dress is invariably a matter of individual judgement and whilst no offence was intended to the two customers by the request to leave the pub, we support the approach of the pub’s management team in this instance.’