A former party girl who feared her lifestyle would kill her has credited the coronavirus pandemic for saving her life after she used lockdown to ditch booze completely and lose almost 5st.

Olivia Ibbitson, 21, from Norfolk, had struggled to control her alcohol intake since she started drinking aged 15 with pals, but soon found herself getting drunk most days, with her weight ballooning to 14st.

The Type 1 diabetic almost lost her life in 2019, after drinking so much she collapsed from alcohol poisoning and pneumonia and was placed in a coma for two days at Queen Elizabeth Hospital.

As the country went into lockdown in March 2020, Olivia pledged to go cold turkey and has lost almost 5st, leaving her feeling more confident than ever.

Olivia Ibbitson, 21, from Norfolk, has credited the coronavirus pandemic for saving her life – using lockdown to ditch booze completely and lose almost 5st (left, before, and right, after) 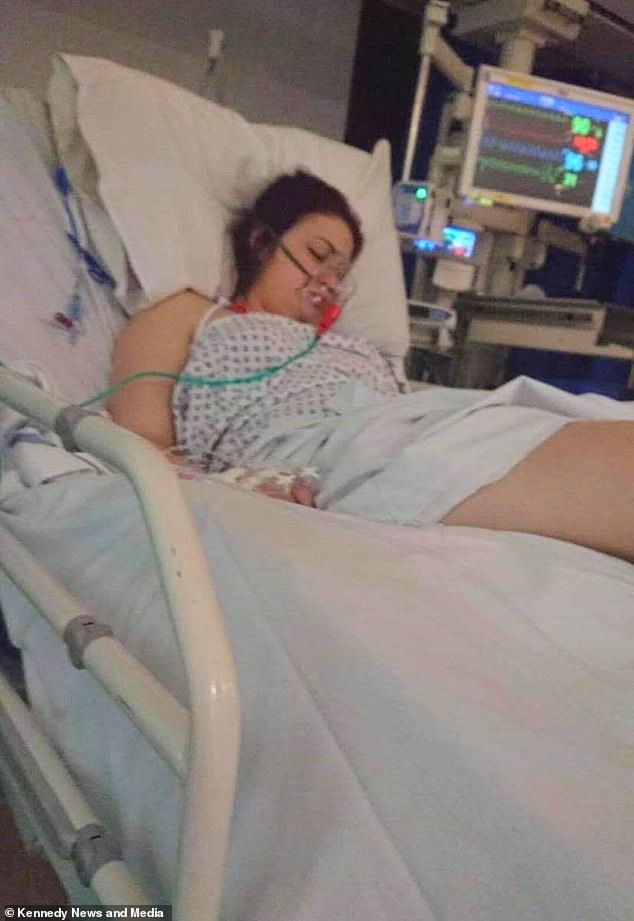 On New Year’s Day 2019, Olivia was placed into an induced coma for two days after she drank so much that she collapsed 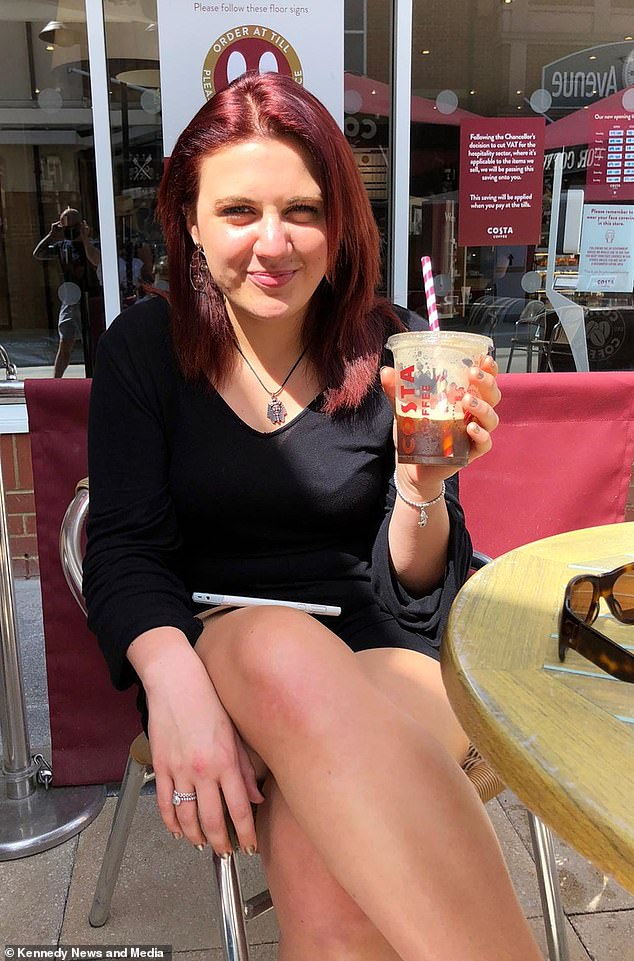 The 21-year-old used the Covid-19 pandemic as an opportunity to lose weight, shedding almost 5st in the last 10 months

Olivia had spent years drinking to excess and claimed she found herself in a position where she hated her appearance and her life.

She would go out most nights and eventually found herself in a ‘really, really scary’ situation, losing friends because of her behaviour.

Olivia said: ‘From the age of 15 I used to drink quite a lot. When I got to about 18 or 19, I was drinking every single day. I have Type 1 diabetes so I became very unwell.’

The 21-year-old would finish two bottles of wine before even leaving the house on a night out and soon piled on the pounds – ballooning to 14st as she turned to fast food to cure her hangovers. 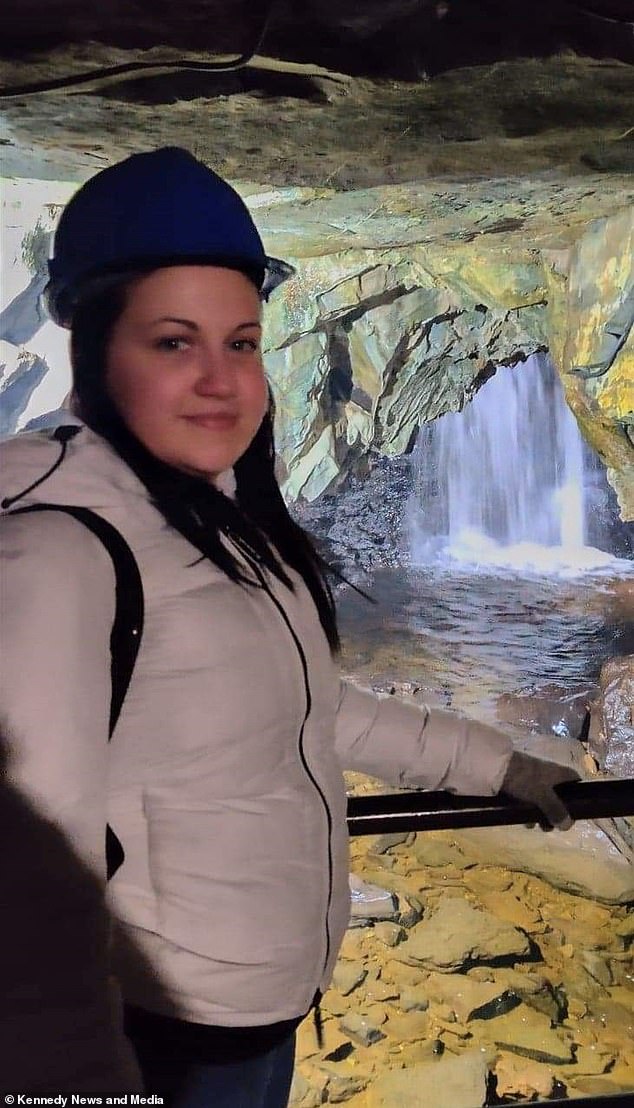 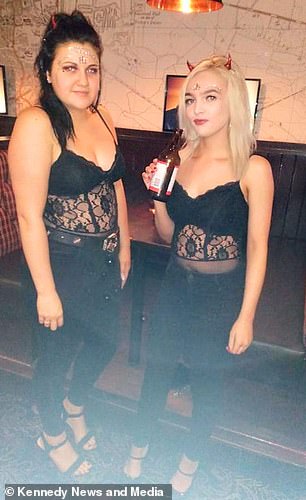 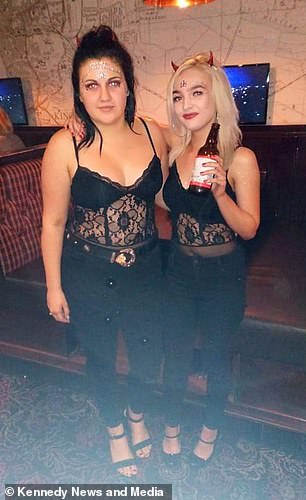 She said:  ‘I’d have about two bottles of wine before I’d leave to go out. The amount of drink would be quite excessive.

WHAT IS TYPE 1 DIABETES?

Type 1 diabetes is an unpreventable autoimmune disease that usually develops in childhood, but type 2 is mostly caused by poor diet.

It afflicts some 400,000 people in the UK, one of the highest rates in the world. Around 1.25 million Americans are also affected.

It starts when the body mistakenly targets insulin-producing cells in the pancreas that maintain blood sugar levels.

As a result, it can drastically affect the body’s major organs and sufferers are forced to inject themselves regularly with insulin.

‘It’s seen as normal to have a drink every night, even a bottle or two, and no one bats an eyelid at it, but that can spiral into some bad, dangerous situations.’

A scary moment came for the Type 1 diabetic when she was rushed to Queen Elizabeth Hospital in King’s Lynn, Norfolk, on New Year’s Day 2019, after collapsing from alcohol poisoning and developing pneumonia.

She explained: ‘On New Year’s Eve [2018], I was out with friends. I was in a really awful time in my life and struggling to cope with a lot of things.

‘I didn’t like how I looked, I didn’t like my life or have many good friends. I didn’t do anything but drink. I was at such a low point and drank to an extreme that night.

‘I was very drunk. I was just laid outside in [a man’s] garden, in the cold.. I think he made a phone call to the police, who sent an ambulance.

‘I ended up in intensive care on New Year’s Day 2019 in a coma due to the alcohol. It was really, really scary.’

After waking up from a coma two days later, doctors warned she nearly lost her life, with Olivia explaining: ‘Doctors said I was lucky. If I wasn’t found then, it would have been it. I would have lost my life that night.

‘I was induced into a coma to save my life and I woke up on January 3, 2019. I stayed in critical care for a week or two after that.’

Olivia continued drinking large amounts for another 14 months, explaining: ‘Despite being in hospital and nearly losing my life [due to alcohol], it didn’t stop me. I continued to drink after that.’

Olivia continued: ‘I would promise myself I’d stop drinking because it was ruining my life and going to kill me, but I was so young, I didn’t think it would.’ 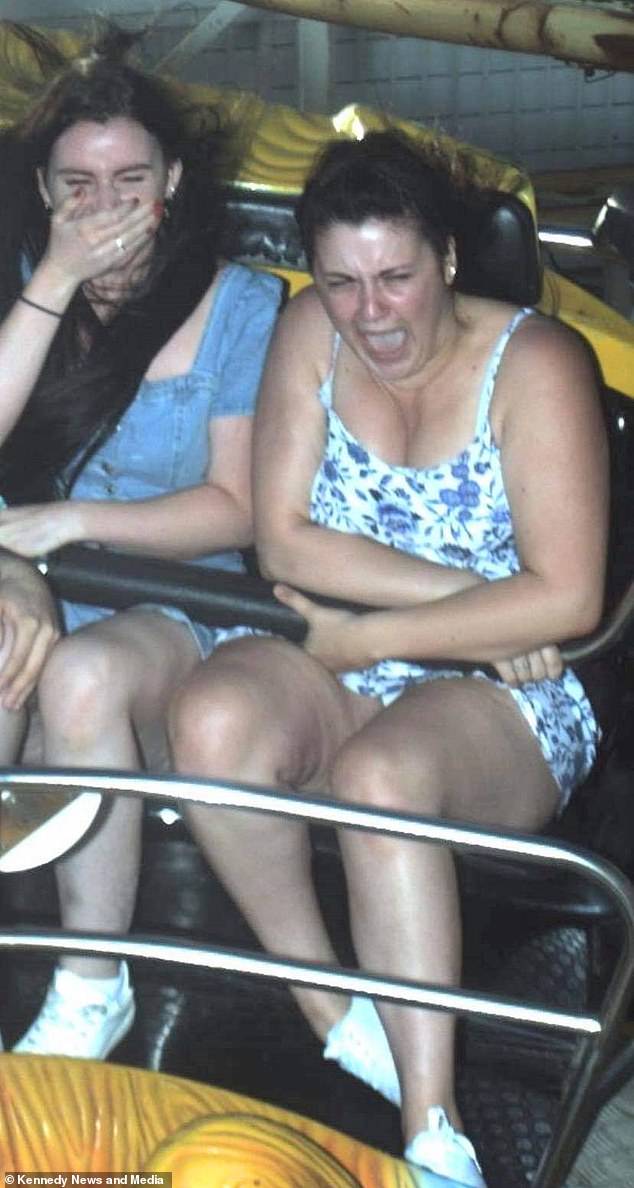 However all of that changed last March, when the country came to a ‘standstill’.

Instead of facing endless months at home, drunk and alone, Olivia knew she had to turn her life around and grasped the opportunity to use the pandemic to her advantage.

She explained: ‘As we entered lockdown, I noticed I’d put on a lot of weight. I was a size 16 and weighed 14st 2 lbs.

‘Lockdown was my chance to take advantage of the fact I was stuck inside and couldn’t go out as easily to drink. 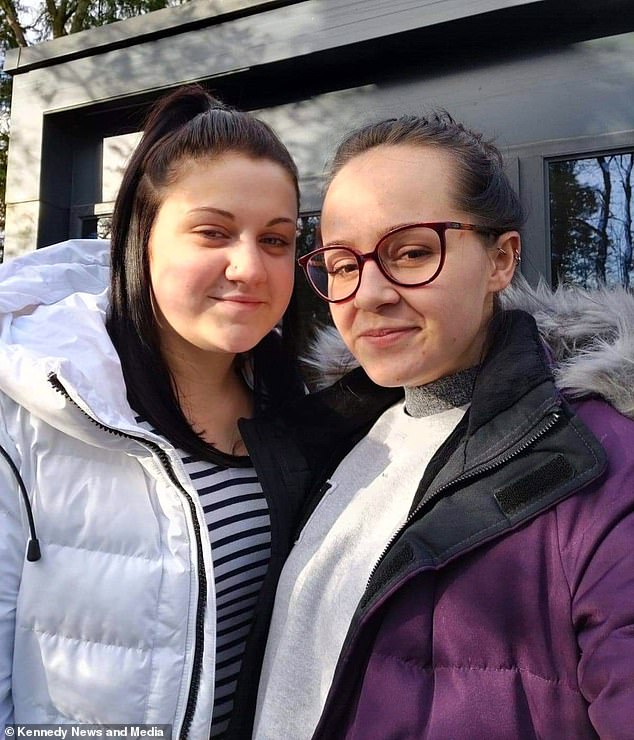 While Olivia said she felt sure she could stop drinking when she wanted to, her friends warned her that she had less control over the habit 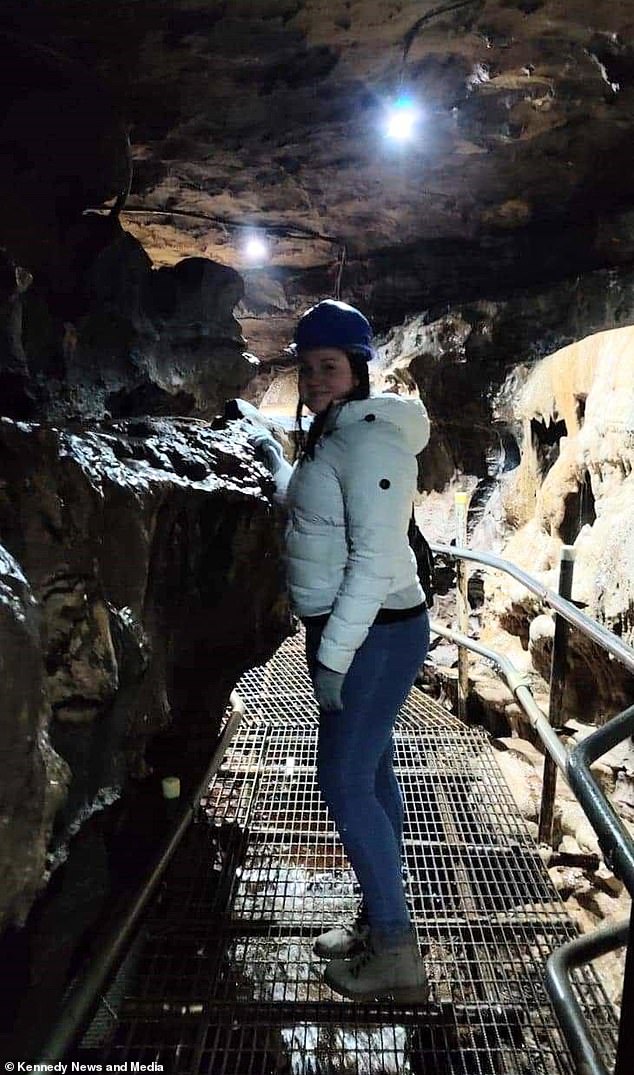 Olivia began drinking heavily as she struggled to cope and her weight ballooned in 2019, which she called ‘a awful time in my life’ (pictured, before her weight loss)

‘You can’t go out because nothing’s open. You can’t go to the pub or get alcohol as easily as you would.’

She vowed to make a lasting change and switched to drinking just water or green tea, while cutting out her hangover McDonald’s meals and replacing them with healthier choices.

She said: ‘I completely stopped drinking alcohol on March 13 and didn’t change much else.

‘The situation with lockdown at the moment is so awful but it’s an opportunity.’ 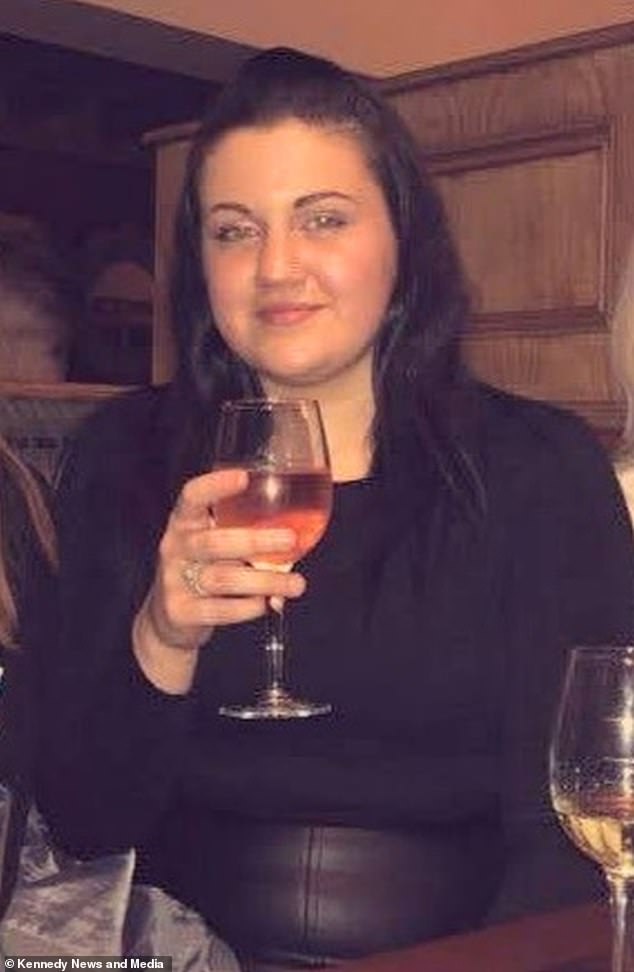 Despite being in hospital and nearly losing her life due to alcohol at the start of 2019, Olivia didn’t stop drinking 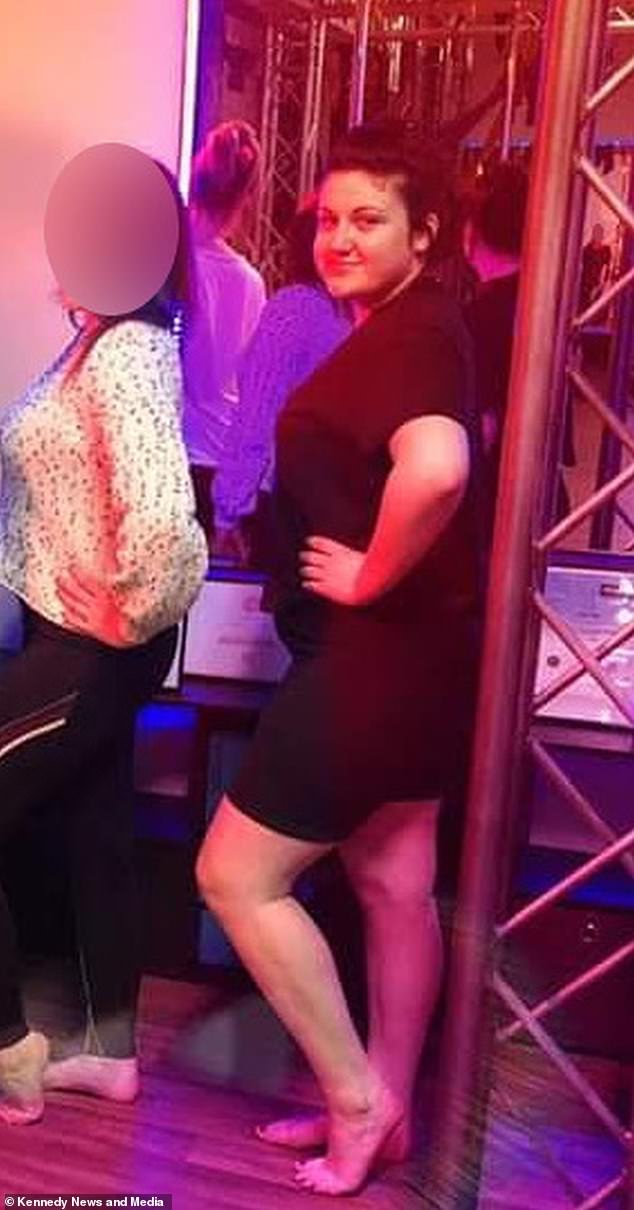 Despite nearly dying after drinking too much, Olivia continued to drink excessively and partied hard

She now credits coronavirus for giving her one last chance – as she decided to utilise lockdown to go cold turkey and bin the booze.

Olivia vowed to stay sober and began walking for just 30 minutes a day, soon noticing the pounds were ‘dropping off quickly’.

She said: ‘For the first month or so it wasn’t anything drastic but after two or three months I just dropped weight so quickly.

‘When you drink, you’re probably going to be eating a lot of takeaways the next day too. That isn’t happening anymore either. 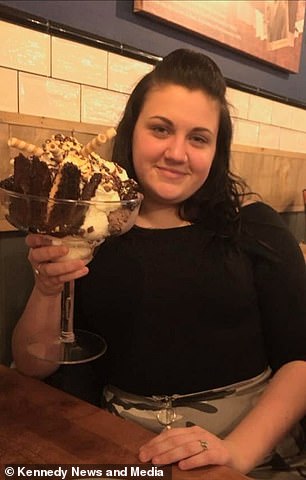 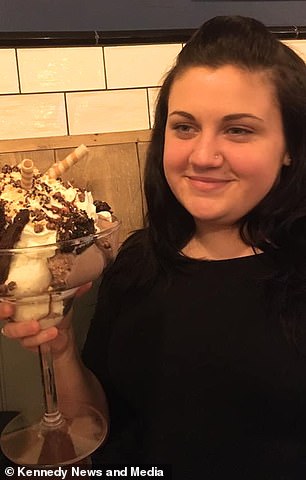 As well as her excessive drinking habit, Olivia said she would often order takeaways and enjoy fast food

Now alcohol free for 10 months and weighing a healthy 10st 3lbs, Olivia is appealing to other problem drinkers to tackle their dangerous habit – claiming lockdown is ‘the perfect time’ to change.

She explained: ‘For people wanting to make a change and stop drinking, this is the perfect time to do it.

‘At the moment, I’d say the world has come to a standstill. We won’t get this opportunity again.’ 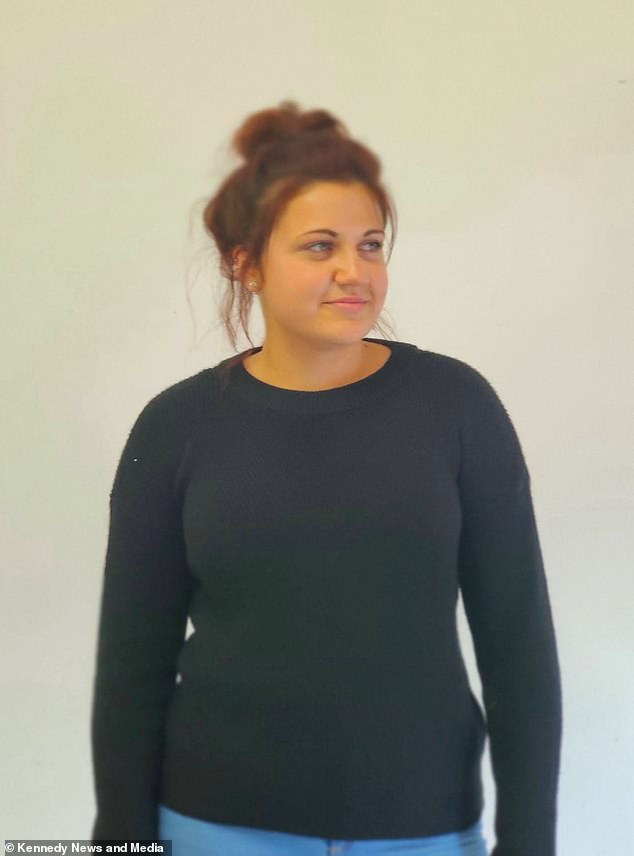 During her lowest moments, Olivia would go out most nights and eventually found she was losing friends because of her wild behaviour 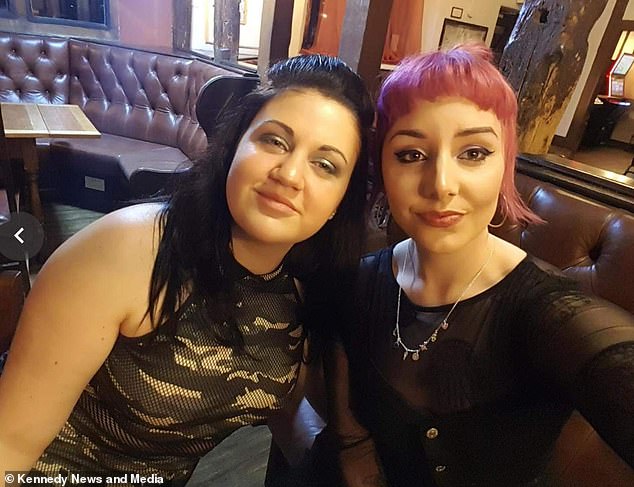 Olivia said her friends tried to warn her that she was addicted to alcohol, but she wouldn’t listen to their advice

‘A lot of my friends had said to me ‘you always say you’ll stop but you can’t’. But I did it on my own.

‘At a time like this, with such a negative thing happening, I try to look at [lockdown] as a positive.

‘I was so poorly I didn’t bother to look after myself but now it’s a priority.

‘I go for a walk for half an hour to exercise, to get fresh air. Anyone can walk 30 minutes in their lunchbreak. It isn’t anything excessive – I didn’t expect to lose what I did. 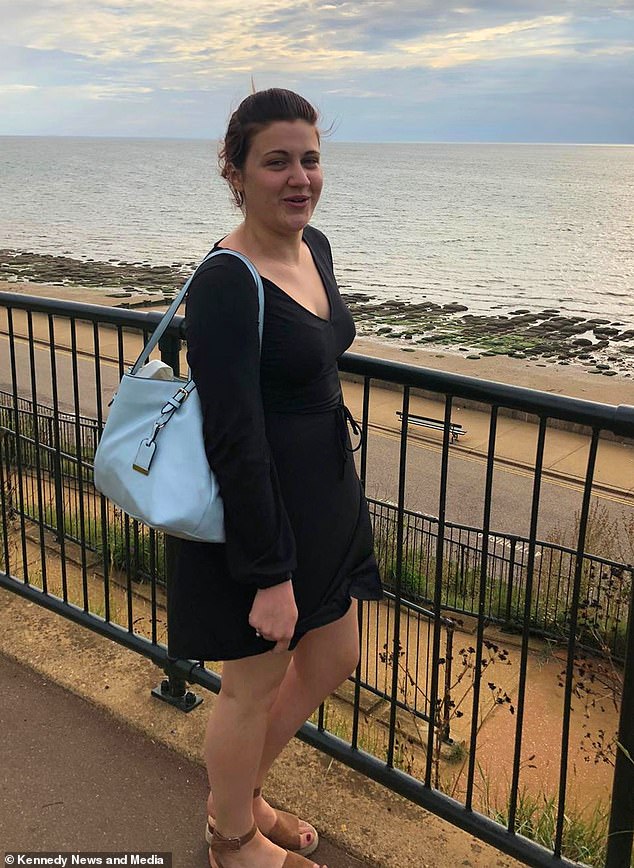 Olivia vowed to stay sober during the first Covid-19 lockdown and began walking for just 30 minutes a day, soon noticing the pounds were ‘dropping off quickly’

‘A lot of people when they have a hangover do tend to go for a McDonald’s breakfast instead of something healthy.

‘I was drinking every day or two days and giving myself a day to recover. It was drink, sit around all day not doing anything then do the same again. Now I just drink water or green tea.

‘I’ve tried to take up new hobbies and learn new things to distract myself from not drinking.’

The 21-year-old, who has Type 1 diabetes, as now dropped almost 5st and weighs a svelte and healthy 10st 3lbs 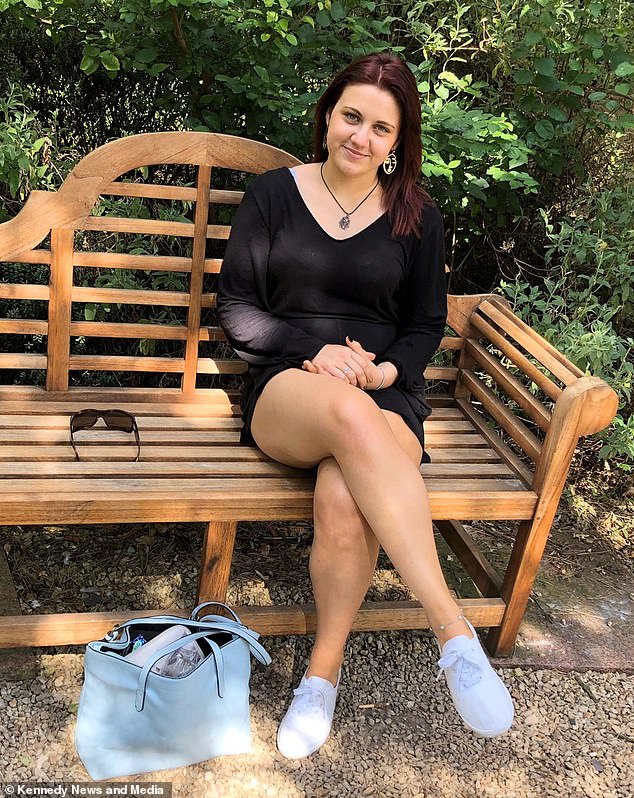 Now Olivia has met a new partner called Mitch and is hoping to return to work soon, saying: ‘We started to chat through lockdown and when it was over [in summer 2020], we met up and haven’t been apart since then.’

She hopes her story of recovery and persistence will inspire others who are feeling stuck in a rut to make a positive change during lockdown.

Greece is hit by 6.9-magnitude earthquake

Olivia said: ‘Now I feel so much happier in myself and so much more confident. A lot of people are back in my life now and people like me more than they did.

‘You could come out of this lockdown not thinking ‘this is awful’ but thinking ‘I achieved so much’. 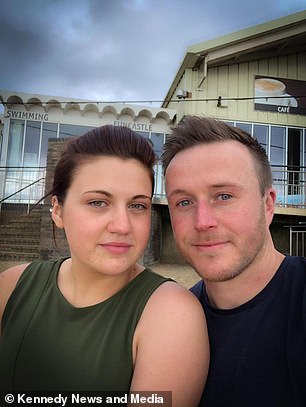 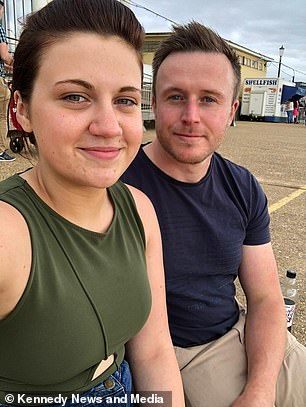 During her weight loss journey in the first lockdown, she began talking to her new partner Mitch. The couple are now inseparable

‘I’m currently waiting for a machine called a pump to help me control my diabetes, then I’m hoping to start working with my partner.

‘Staying healthy because of covid-19 is another motivator.

‘In the past when I was drinking, dating wasn’t an option. I wasn’t in a position to be in a serious relationship.

Breakfast: slice of toast with a yogurt and handful of berries

Lunch: spinach and ricotta cannelloni or a wrap

Brexit: Can the state subsidy row blocking a EU-UK trade deal be resolved?