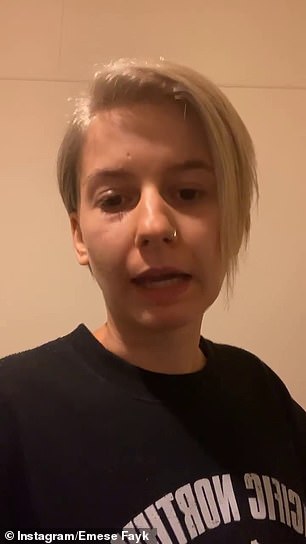 Emese Fajk, 28, filmed a video saying she made a mistake by hiring a conveyancer rather than a solicitor, while denying claims she hasn’t paid

A cyber security expert accused of failing to stump up the money after placing the winning bid on Tam and Jimmy’s $4.2million home on The Block has hit back in a late-night Instagram rant.

Emese Fajk, 28, was the mystery buyer who snapped up the Brisbane-based couple’s winning property last month.

Ms Fajk presented receipts of bank transfers indicating the money for the home had gone through, but the large sum never reached Channel Nine’s bank accounts.

The settlement date for the Brighton property, which fetched $4.256 million on auction day at a profit of $966,000, was on Monday, and the original contract is now void.

Tam and Jimmy choked back tears as they told A Current Affair how they’d been left blindsided by the strange turn of events.

But Ms Fajk has now taken to social media to vehemently deny claims she hasn’t handed over the money, and instead blamed her conveyancer – a specialist lawyer that helps with property sales – for the bungle.

‘When people I don’t know try to dig into my life, that has been locked down and sealed, and everyone I professionally or academically come into contact with, knows not to engage and share info, I feel like it needs to be said: ‘BACK THE F*** OFF’,’ she wrote.

The Hungarian-born tech expert shared a form she apparently received from property company PEXA, saying she owed $4,072,950 on December 16 – five days before the December 21 settlement date.

The document appeared to indicate it was created and sent to her on December 17 – a day after the payment was due.

‘I’m not a magician. If things are due after I get a form, I can’t make them happen,’ she said.

Ms Fajk then filmed an Instagram video saying she made a mistake by hiring a conveyancer rather than a solicitor as he made her ‘work out’ her own stamp duty. 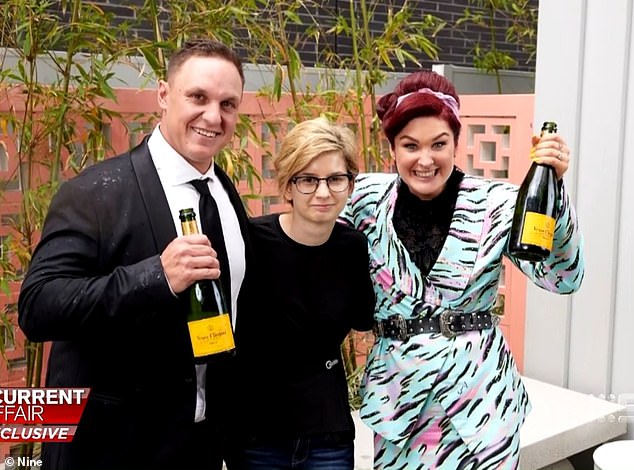 Cyber security specialist Emese Fajk (centre), 28, was the mystery buyer who snapped up Jimmy and Tam’s winning property on The Block last month. Pictured with the couple 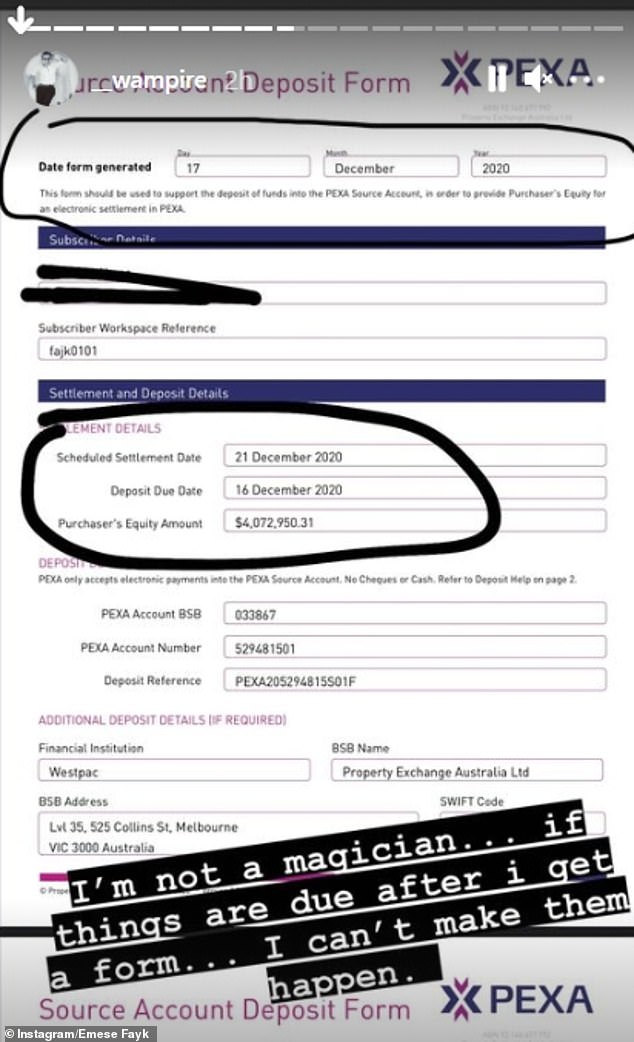 ‘Mistake number two – going with [the conveyancer’s] super slow process, where I had to chase things up constantly,’ she told her 2,000 followers.

‘I didn’t get really important pieces of info until they were overdue. Whenever I had a question or an issue it took days to get an answer. Everything just took too long and I didn’t know the process myself.’

Ms Fajk said in hindsight she should have turned to another property professional, but wanted to get the process over and done with.

‘Also, we were at the halfway point to settlement and it just wasn’t possible to get someone new on board,’ she said.

‘I looked into it and it just was not feasible. I reached out to people behind The Block and we agreed we would do our best to work it out.

‘I spent a day trying to fix mistakes caused by other peoples’ incompetence, throughout the day I spoke to multiple people and did my best to keep things peaceful and get everything sorted and settled.’

The 28-year-old, who spent time living in London and New York before moving to Ballarat, said she would never have turned up at the hit tv show’s auction day if she had planned to withhold her money.

‘I don’t know that anyone would go [on the show] if they didn’t think they could buy a house because everyone knows the publicity that comes with it,’ she said. 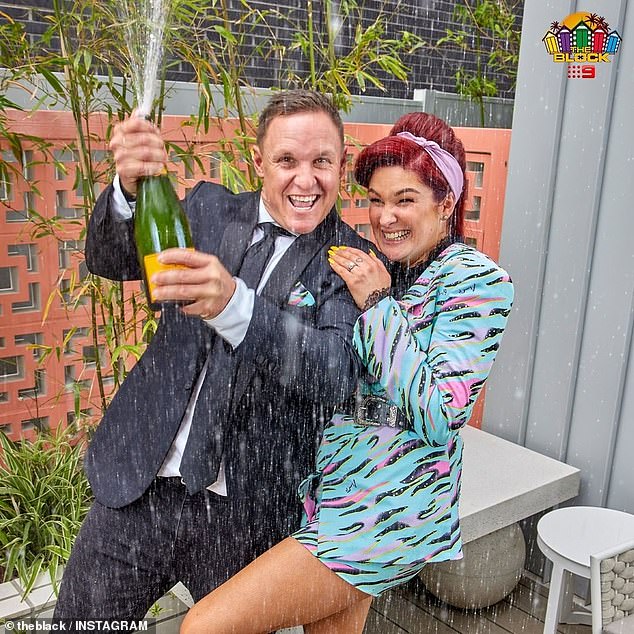 The Block winners Jimmy and Tam have lost their $1.06million prize and have been forced to put their home back on the market after its buyer failed to pay up 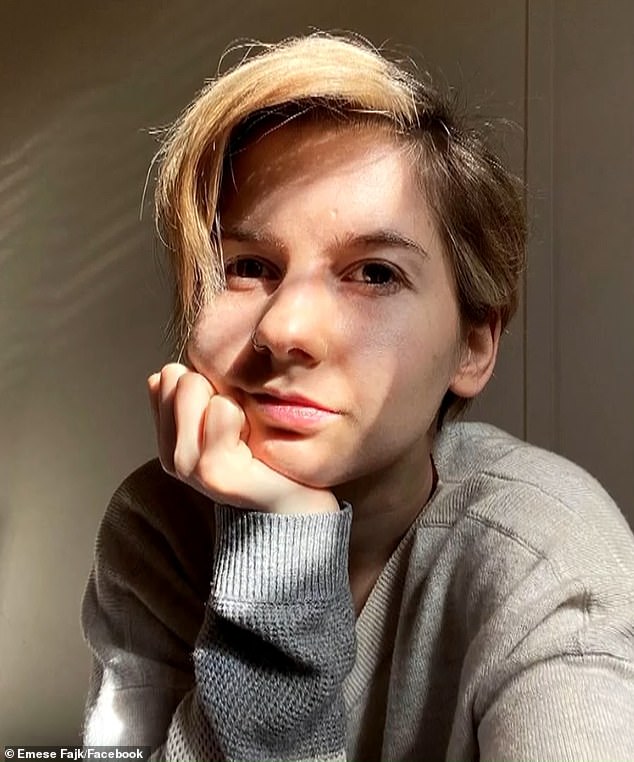 Ms Fajk, who was born in Hungary and spent time living in New York and London, insisted she has paid the money and said she still hopes to one day own the house

Earlier in the night Ms Fijk claimed she had been ‘thrown under the bus’.

‘I didn’t get forms in time that I needed to sign, I had to find crucial information on my own, even though I paid someone else to make sure there are no hiccups,’ she wrote on Facebook.

‘I still believe there is a happy ending here somewhere for everyone involved.’

When confronted by Nine reporter Alison Piotrowski, she insisted she had paid the deposit for the property and had receipts to prove it.

‘I don’t know what happened, I’ve paid for everything,’ she said. ‘I’m trying to find out what’s going on,’ she claimed.

Jimmy told ACA that he has no idea what’s going to happen moving forward. 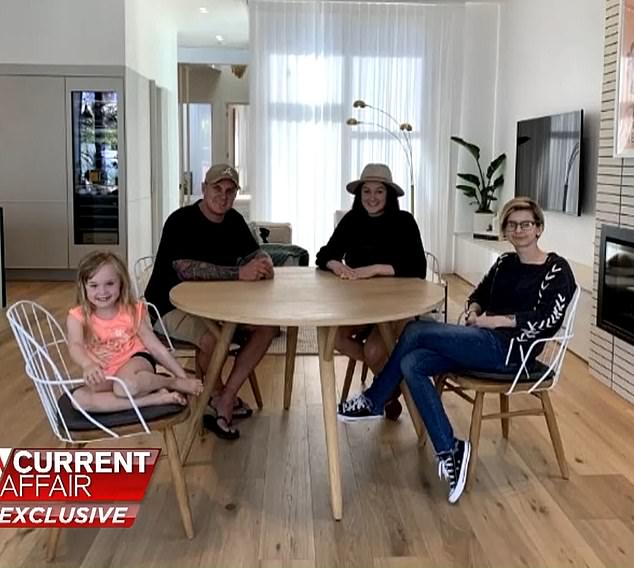 Tam said Ms Fajk even went to the couple’s house to watch the final episode, and celebrate over a bottle of wine. Pictured: Jimmy, Tam, their daughter and Ms Fajk 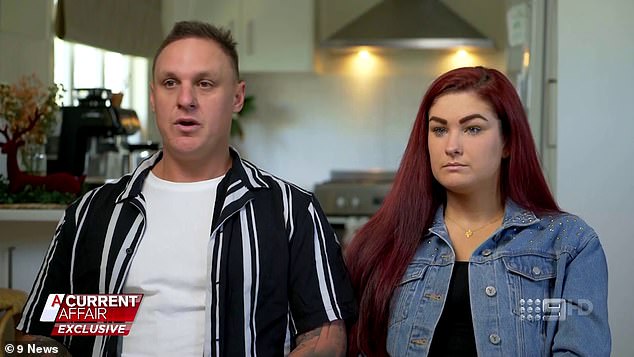 Jimmy said the payment process has been ‘strung along’ leading up to the settlement date, which was yesterday

An emotional Tam said Ms Fajk even went to the couple’s house to watch the final episode, and celebrate over a bottle of wine.

‘She actually cried with us when the result came over, it was like we knew her as a friend and we welcomed her into our family as a friend,’ Tam told ACA.

Tam said the disastrous outcome has tainted her and Jimmy’s experience on the hit TV show.

‘This was meant to be something huge for us and now it’s just horrible,’ she said.

‘Why us? Why did she choose us to do this to? I honestly have no idea, I don’t get it. It’s really bizarre.’

Jimmy said the payment process has been ‘strung along’ leading up to the settlement date, which was yesterday.

‘[There were] no signs whatsoever that she was not going to buy the house,’ he said.

Ms Fajk’s LinkedIn profile claims she has a degree in Behavioural Science at the University of West London.

But the prestigious university revealed they had not given an award to anyone by the name of Emese Fajk.

‘We trusted her to have that sort of coin… Stuff happens, and it’s happened to us… It’s about human nature, it’s about honestly. I suppose.’ 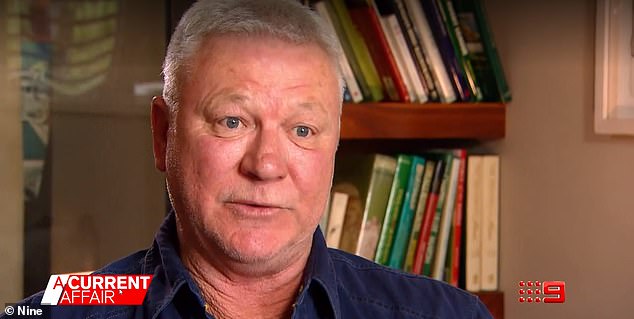 The Block host Scott Cam told ACA the situation is ‘disappointing’ but said Tam and Jimmy are still the winners and will get to keep their $100,000 prize money

Cam said despite the unfortunate outcome, Tam and Jimmy are still the winners of the 2020 season and will get to keep their $100,000 prize money.

He also revealed the house will go back on the market, and will likely fetch even more money than at the aired auction in November.

‘It’ll sell – there’s no doubt. It might even sell for more because the market’s going up,’ he said.

He said there was ‘no doubt’ the house would sell the second time around, claiming it might even fetch more due to the rising housing market.

The rookie renovators then jumped to a seven-figure sum, as an extra $100,000 in prize money was thrown in on top.

A conveyancer who sends things off way too late, doesn’t send things or doesn’t do things he said he will + a person who has been out there trying to blackmail me for 2 years and despite everything I allegedly did and despite allegedly taking me to court etc, nothing he ever threatened me happened = a s***storm due to people wanting a ‘good’ story.

When asked (today around 11am) I provided everything I was asked. Yet absolutely none of it was considered or used. I reached out, I tried to make this a conversation and nothing.

Despite all this, I’m working on fixing the issue that I was part of as I was too lenient and trusting. I have a new firm behind me and I reached out to those who are behind the technical part of settlement and we are working this out.

This was absolute fiction and I’m not gonna let you run with this s***! It was one sided, sensationalist, malicious and absolutely pre meditated as I knew exactly when you were trying to dig and I reached out.

No one bothered to talk to me while this was in the making for a month.